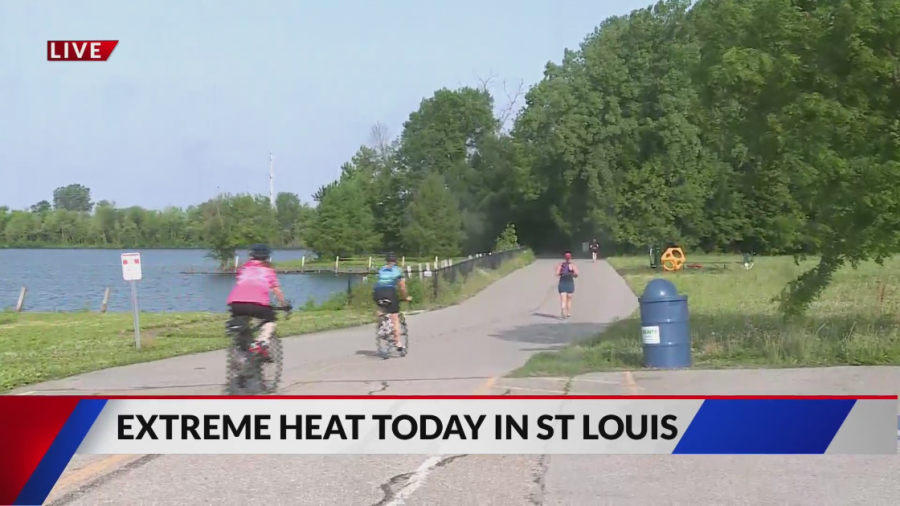 CREVE COEUR LAKE, Mo. — People were at Creve Coeur Lake early Sunday morning trying to run or go in and brave the heat.

People showed up just after sunrise and did everything from biking to walking to walking their dogs. Many were out early before the extreme heat set in later in the day.

The heat will be a factor at the Spirit of St. Louis Air Show and STEM Expo in Chesterfield. Thousands are expected at the airshow today to see the Blue Angels perform and get a look at the other aircraft and exhibits.

The organizers are aware of the heat. There’s a message on the show’s website that addresses summer temperatures.

It says there will be no restrictions on how much water people can bring due to today’s extreme heat. Usually there are limits.

The organizers ask people not to bring hard cooler bags, but soft cooler bags are allowed. They have also increased the water capacity of the so-called “free water buffalo” alongside the MINT Expo.

The message on the air show’s website also warns people to stay hydrated and to let volunteers at the show know if you need medical attention. And that message really applies to all of us. Stay hydrated in the approaching heat and ask for help if you need it.

https://fox2now.com/news/residents-out-early-to-beat-the-heat-and-message-from-organizers-for-sundays-air-show/ Local residents got out early to brave the heat and the organizers’ message for Sunday’s air show

The head of TikToker asked for notes from the Zoom meeting. She doodled.