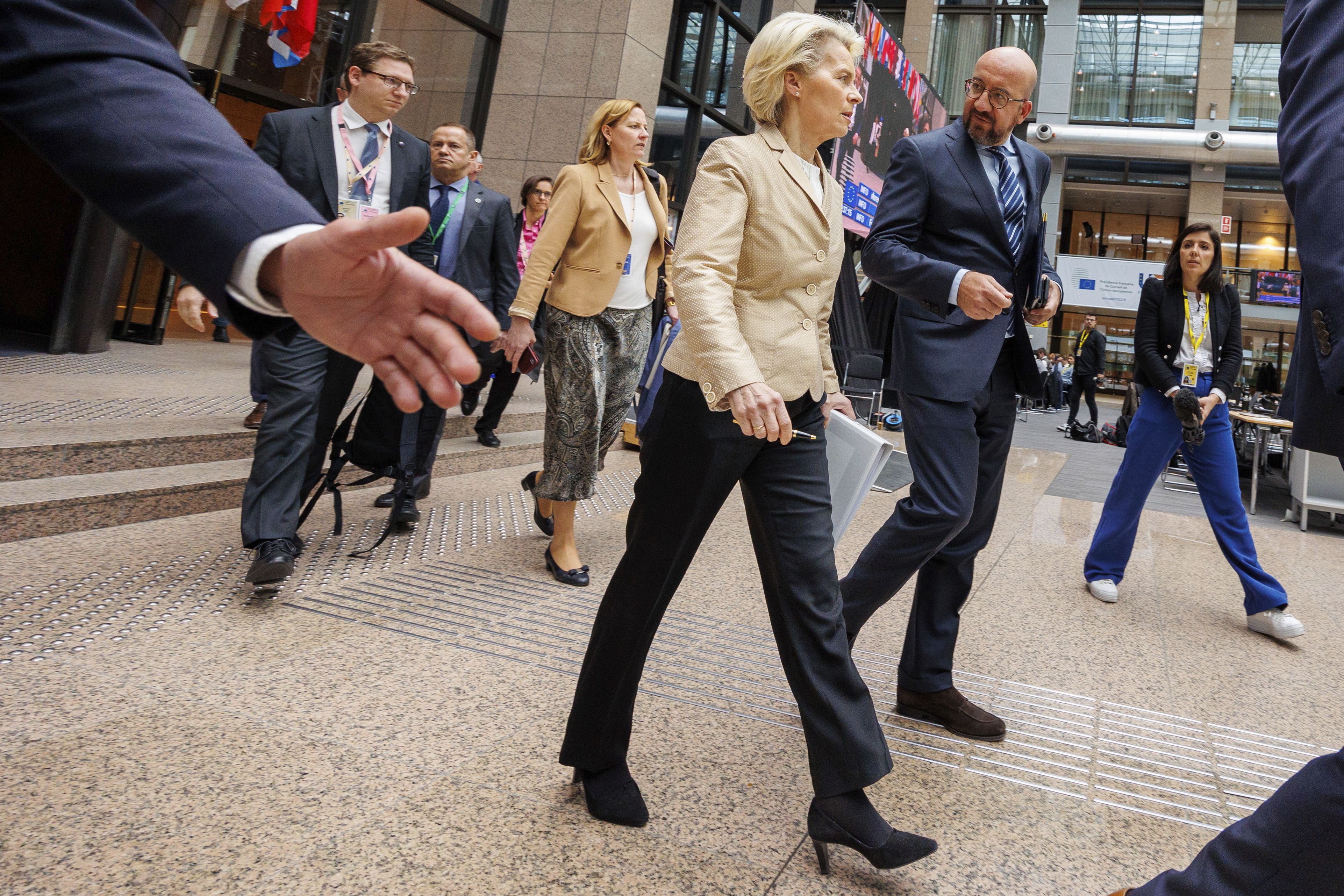 Kyiv, Ukraine — A regional governor in southern Ukraine says Russian troops are retreating and blowing up bridges to hamper a possible Ukrainian advance.

Mykolayiv region governor Vitaliy Kim claimed on messaging app Telegram on Wednesday that Russia is on the defensive.

“They are afraid of a breakthrough by the (Ukrainian armed forces), but we are not afraid and support our troops,” he wrote.

Kim did not specify where the retreat he described took place. The parts of the Mykolayiv region that have been held by Russian forces in recent days lie near the Russian-held major city of Kherson.

Ukrainian President Volodymyr Zelenskyy said in his nightly address on Tuesday that Ukrainian fighters had seen “some success towards Kherson”.

Russia is concentrating most of its military might on conquering the entire eastern Ukrainian region of Donbass.

BRUSSELS – The European Union’s asylum agency says the number of people from former Soviet countries seeking international protection in Europe has skyrocketed since Russia started its war in Ukraine.

The agency said on Wednesday about 14,000 Ukrainians applied for asylum in March, a number about 30 times higher than before the war, which began on February 24.

That number comes on top of an estimated 3 million Ukrainians who have applied for emergency shelter under an EU program that provides war refugees with shelter, access to jobs, medical treatment and education.

The largest increases in asylum seekers were recorded among citizens of Belarus, Azerbaijan, Tajikistan, Uzbekistan and Turkmenistan. However, according to the EU authority, it is unclear whether these people came from their home countries or were living in Ukraine when the war began.

The number of Russians seeking asylum in the EU also rose to 1,400 in March, the highest since 2018.

Asylum is usually granted to people at risk of serious harm because of their race, religion, nationality, political opinion or membership of a social group, and to people fleeing war, torture and degrading treatment.

BERLIN – Chancellor Olaf Scholz says his country will supply Ukraine with modern anti-aircraft missiles and radar systems and increase arms shipments amid criticism that Germany is not doing enough to help Kyiv.

Scholz told German lawmakers on Wednesday that the government had decided to equip Ukraine with IRIS-T missiles, which Germany had developed together with other NATO countries.

The announcements come amid claims at home and abroad that Germany has been slow to provide Ukraine with the weapons it needs to defend itself against Russia.

KIEV, Ukraine — A regional governor in eastern Ukraine says Russian forces control 70% of Sievierodonetsk, a city that has become the focus of Moscow’s offensive in recent days.

Lugansk region governor Serhiy Haidai said in a Telegram post on Wednesday that some Ukrainian troops were fighting with the Russians in the city, while others had retreated.

“The evacuation (of civilians) has stopped. There is no way to provide humanitarian assistance,” Haidai said.

He said the only other city in the Luhansk region not taken by Russia or Moscow-backed separatists – Lysyhansk – is “completely” under Ukrainian control.

President Volodymyr Zelenskyy told US TV channel Newsmax that “the most difficult situation is in eastern Ukraine,” including Donetsk and Luhansk provinces.

“The situation is very difficult. We lose 60-100 soldiers a day as dead and about 500 people as wounded. So let’s keep our defensive perimeters,” said Zelenskyy.

Ukraine has largely refrained from disclosing its military losses since the Russian invasion began, but Zelenskyi previously said the country was losing between 50 and 100 soldiers a day.

VATICAN CITY — Pope Francis has called for an end to the confrontation over grain shipments in Ukraine and has called for a comprehensive effort to prevent an important commodity from being “used as a weapon of war.”

Francis appealed Wednesday at the end of his general audience.

The pope said he was concerned a Russian naval blockade would delay millions of tons of grain and deprive poor countries of such a staple necessary to feed millions.

“I appeal to everyone to do everything possible to resolve this issue and to guarantee the universal human right to food,” Francis said.

He added: “Please do not use grain, a staple, as a weapon of war.”

Last week, Russian President Vladimir Putin urged the West to lift sanctions imposed on Moscow over the war in Ukraine in order to shift the blame for the growing world food crisis.

MOSCOW – Russia’s state-owned gas giant Gazprom confirms it has halted gas supplies to Shell Energy Europe and Denmark’s Ørsted after the two companies refused to pay for the supplies in rubles.

Gazprom said in a statement on Wednesday morning that it had not received any payment from either company for gas delivered in April and is therefore halting deliveries.

Moscow offered customers who buy its natural gas to open an account in dollars or euros with Russia’s third-biggest bank, Gazprombank, then a second account in rubles. The importer would pay the gas bill in euros or dollars and instruct the bank to exchange the money for rubles.

Russian President Vladimir Putin has cast doubt on ownership of the jets by allowing planes to be re-registered in Russia to avoid their confiscation under sanctions over Moscow’s invasion of Ukraine.

The European Union, home of major aircraft leasing companies, banned the sale or leasing of aircraft to Russian airlines in February. Putin responded by passing a law allowing plans to be registered in Russia.

Russian airlines that could not provide documents showing their planes were “deregistered abroad” have been banned from flying to China, RBK said.

WASHINGTON — President Joe Biden, in an op-ed for the New York Times Tuesday night, said he had decided to equip Ukrainians with more advanced missile systems and munitions that would allow them to more accurately hit key battlefield targets.

The expectation is that Ukraine could use the missiles in the eastern Donbass region, where they could both intercept Russian artillery and take out Russian positions in cities where heavy fighting is taking place, such as Sievierodonetsk.

This city 90 miles (145 kilometers) south of the Russian border lies in what is the last Ukrainian government-controlled island in the Luhansk region of Donbass.

In his New York Times essay, Biden said the US did not encourage or enable Ukraine to strike beyond its borders and did not want to prolong the war “just to inflict pain on Russia.”

US officials familiar with the decision have not specified exactly how much the aid will cost, but it will be the 11th package approved so far and the first to include the $40 billion in support recently passed by Congress takes US dollars.

WASHINGTON — The Biden administration announced on Tuesday that it will send Ukraine a small number of high-tech, medium-range missile systems.

This is a crucial weapon that Ukrainian leaders have been begging for as they struggle to halt Russian advances in the Donbass region.

The US plan tries to strike a balance between wanting to help Ukraine counter rampant Russian artillery barrage and providing weapons that could allow Ukraine to hit targets deep in Russia’s interior, and triggering an escalation of the war.

US officials say the aid package, which is expected to be unveiled on Wednesday, would send what the US believes are medium-range missiles – they can generally travel about 45 miles (70 kilometers).

The expectation is that Ukraine could use the missiles in the eastern Donbass region, where they could both intercept Russian artillery and take out Russian positions in cities where heavy fighting is taking place, such as Sievierodonetsk.