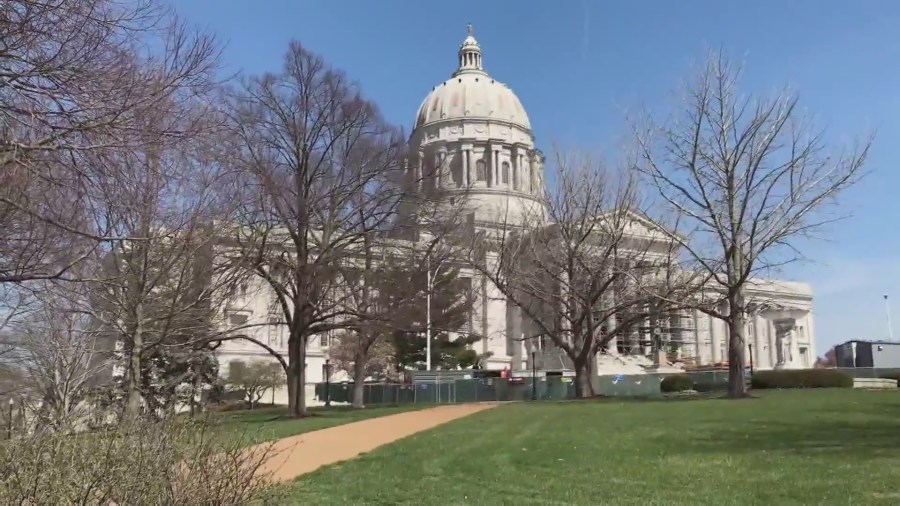 Lawmakers were able to get the job done less than four hours before the 6 p.m. Friday constitutional deadline. The spending plan totals $49 billion, about $10 billion more than last year’s budget. It includes raising base salaries for teachers, fully funding Medicaid’s population expansion, and some Missourians will receive a tax credit.

“The winners of this budget are the citizens of the state of Missouri,” said Senate Minority Leader John Rizzo (D-Independence). “We’re going to be investing a lot in infrastructure over the next few years.”


Whether you’re Republican or Democrat, there seemed to be one piece in the $49 billion budget that made everyone happy.

The Show Me State has the lowest teacher salaries in the nation, nearly 20% below the national average. Because of this, lawmakers have approved an initial increase to $38,000 per year, but if there are counties where teachers are already making $38,000, they won’t see the extra money.

“It’s going to be my first year in the House of Representatives where I’m going to be voting on all these operating budget bills,” said Rep. Peter Merideth (D-St. Louis).

Lawmakers have also earmarked $214 million for school transportation, the first time it has been fully funded since 1991.

“The full funding of school transportation, something that we have funded 40% of the past few years before,” Merideth said. “We’re finally funding it 100%.”

Almost a quarter of a billion dollars will be spent to raise teachers’ minimum salaries from $25,000 to $38,000. The state would pay 70 percent of the raise and the district would pay the rest, but the money is only available to schools where teachers currently earn less than $38,000.

According to the Department of Elementary and Secondary Education (DESE), around 4,000 teachers earn between $25,000 and $35,000 a year. This increase will cost the state more than $21 million.

Also budgeted is $37 million for the Career Ladder program, which provides raises for experienced teachers. Under state law, teachers earning professional credit, mentoring students, or participating in extracurricular activities are covered by the program.

Funding for higher education will also increase, with $10 million going to community colleges and a 5.4% increase in funding for all colleges and universities overall.

The budget also includes $50 million to help students recover from learning losses experienced while schools were closed during the pandemic.

Other budget items approved by Senate Committee: $2.4 million to fully fund Amtrak’s twice-daily service between St. Louis and Kansas City, known as the River Runner. The train was reduced to one trip per day in January due to a lack of funding.

But there were still tensions between the two houses, particularly over the American Rescue Plan Act (ARPA) appropriation bill.

“The House sent it to the Senate very late, and we didn’t have much time to work on it,” said Sen. Dan Hegeman, R-Cosby, Senate Appropriations Chair. “It’s really a time trouble that we got caught by that. It would have been nice to be able to work it out better, but this is where we ended up.”

In one of 19 budget bills passed Friday, lawmakers authorized full funding for the state’s $2.5 billion Medicaid program. Nursing homes and other providers will also see a rate increase from the state to serve low-income Missourians.

The ARPA budget totals $3.4 billion, most of which will go toward infrastructure projects and broadband deployments across the state. That money, though it doesn’t have to be spent until 2026, will be used for things like sidewalk and intersection improvements and sewage projects.

“It’s $3 billion, no talk, it hasn’t been reviewed and it hasn’t even been discussed,” said Rep. Rasheen Aldridge (D-St. Louis). “That side of the team hasn’t been treated fairly on either side of the aisle in my opinion.”

There was heartburn among members that the Senate made its own changes to the budget, adding an extra billion dollars to the version submitted by the House of Representatives and passing it less than 24 hours before Friday night’s deadline.

“Once again, it’s happening in the last few minutes of the last day to make it less likely that we’ll push back,” said Rep. Tony Lovasco (R-O’Fallon).

On Thursday night, Hegeman added a non-refundable tax credit to a home bill that stipulated employees should be paid every two weeks. It would cost the state up to $500 million and would be based on last year’s application. Single applicants could receive a rebate of up to $500, and married couples could receive up to $1,000.

One change Rizzo is offering puts an income cap that doesn’t allow people earning more than $150,000 a year and $300,000 for a married couple to receive the rebate. The House passed a similar version earlier in the session, a priority for House Republicans.

“They did this specifically to pressure us to accept their priorities because they knew it would be difficult to hit the no button on funding for a tax credit that supports a majority of people in this room.” said Lovasco.

House Democrats opposed the loan, saying it would not go to Missourians who need it. In the end, the bill was accepted and sent to the governor’s desk.

“We’re doing our job and giving people their money back,” said Rep. Scott Cupps (R-Shell Knob). “It’s not our money. It’s their money and we’re going to give some of it back.”

Even with the $500 million tax credit and the big spending plan, Hegeman said the state has $1 billion untapped on the table.

Some things not approved by the legislature were a $500,000 increase in the prosecutor’s office to hire five additional attorneys. This was a house request. Then it was scrapped by the Senate after Sen. Lincoln Hough (R-Springfield) said Eric Schmitt, who is running for the US Senate, continues to file lawsuits against schools over COVID mitigation.

Another reason was a request from the governor’s office to pay for a new state trail along Rock Island’s railroad corridor. Gov. Mike Parson originally asked for nearly $70 million in federal aid to develop the trail that would connect to the Katy Trail, but was left unfunded in the spending plan.

The governor has until July 1 to either sign off on the budget or veto any item within the spending plan.