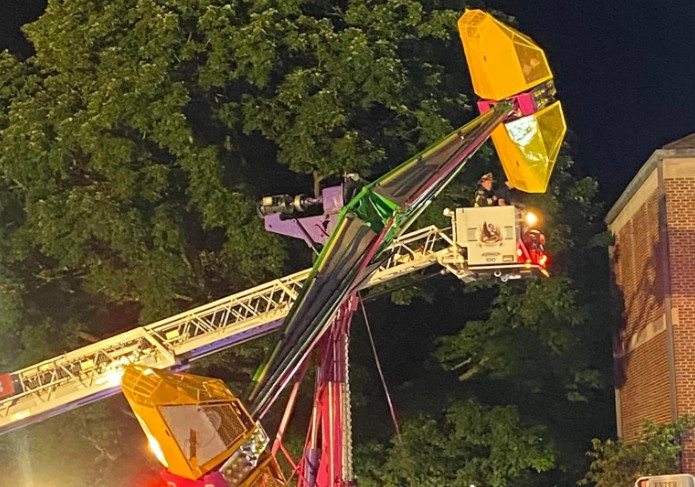 Investigators say seven people were trapped in a cart at a downtown ride. People were stranded in carts somewhere between 10 and 40 feet in the air when the ride collapsed around 10pm on Friday. The rescue operation lasted about half an hour, but no injuries were reported from the situation.


The ride is part of a weekend carnival called St. Peterfried, which has been held as a fundraiser for St. Pete’s Catholic Church for more than three decades. The company that operates the ride, American Banner Amusements, has since removed the ride from the carnival.

Church officials say the ride broke down because a part broke. They also say that this is the first time such an incident has happened to one of the rides for St. Peter’s Festival.

“St. Louis County came out Friday and inspected all the rides,” said Kevin Stillman, director of St. Peter’s Church. “They gave the clearance and we felt we did our duty of care. Those things happen but I get back to it no one was hurt.”

Kirkwood Fire Chief Brian Zaitz says his firefighters have been trained for such situations. The fire brigade used ropes, technical systems and a turntable ladder to get people out of the ride safely. A Facebook post from the Kirkwood Fire/Rescue Department provides an insight into Friday night’s operations.

Coincidentally, the carnival ride rescue came hours after a rescue at the Gateway Arch site in downtown St. Louis. More than 20 people were rescued after a tram in the bend got stuck for about two hours.

Girl, 11, wins our anniversary tea towel contest - and YOU could get one of her creations for free