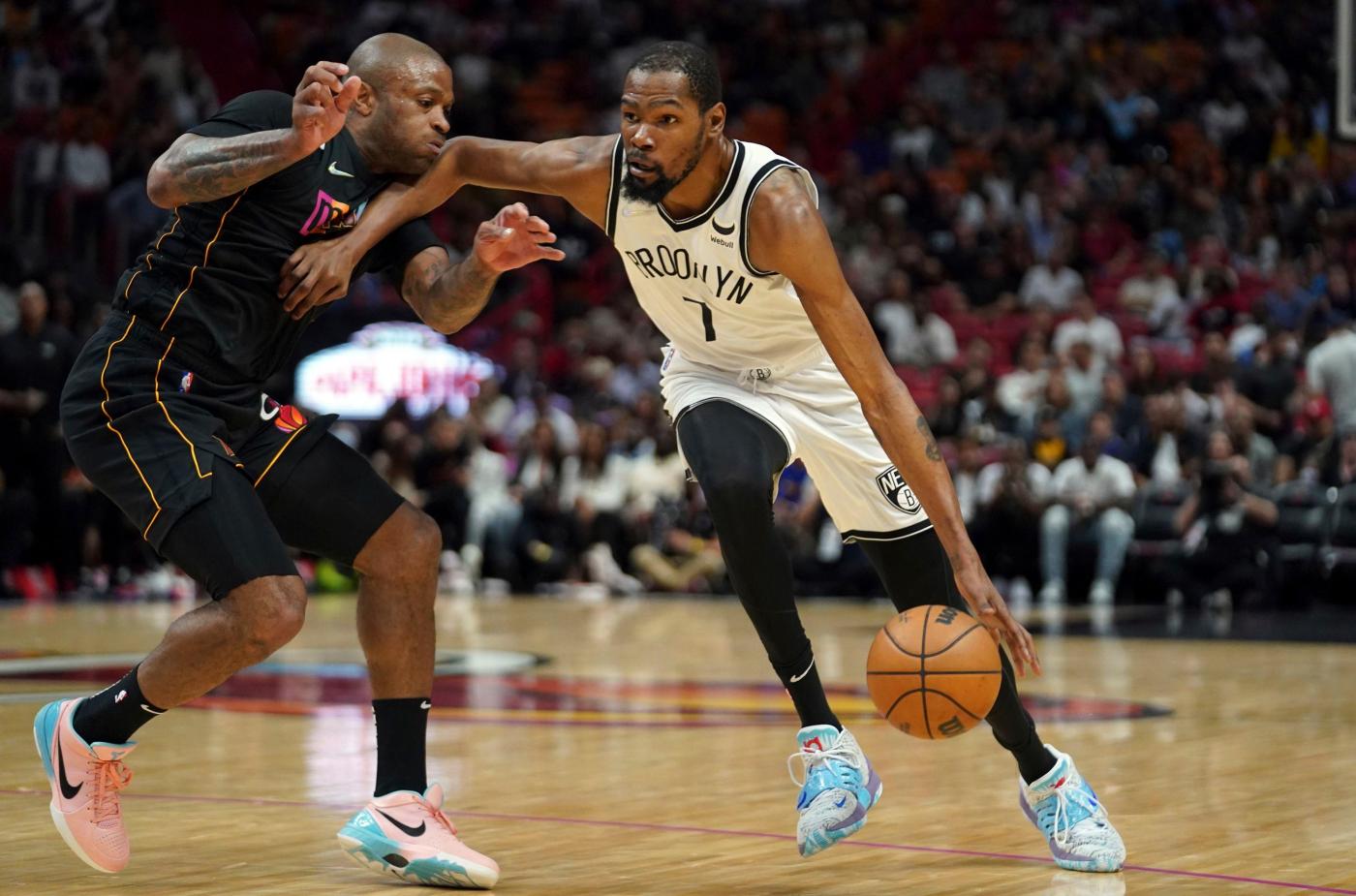 MIAMI — Kyrie Irving and Kevin Durant recently softened short-term expectations, both claiming their regular seasons were too disjointed to expect a championship.

But if Saturday’s laughter was any indication, the stars are selling way too short.

The Nets not only beat the Heat on the road Saturday night, 110-95, they embarrassed and taunted the supposed Eastern Conference contender. With the blowout already established, the Nets’ huge center Andre Drummond gave the peace sign to a trailing Tyler Herro on a fast break before diving.

Midway through the third quarter, nets were up 27.

A few minutes later, Seth Curry nailed a 3-pointer from a turnover to increase the lead to a game-high 37 points, sending onlookers Floyd Mayweather and Antonio Brown into courtside celebration. Much later, in the fourth quarter, Blake Griffin showed his own two-fingered peace sign after burying a shot.

It was a show from Brooklyn (39-35) on Biscayne Blvd. that saw Irving (11 points, six assists) and Durant (23 points, five assists) sit out the entire fourth quarter. It should provide plenty of respite for Irving’s home debut on Sunday.

Miami (47-28) entered the night over the East, but in a flurry. In addition to losing four straight games, Pat Riley’s side also gambled away a 17-point lead over the lottery-bound Knicks in the fourth quarter on Friday night. Two nights earlier, star Jimmy Butler got into a heated argument with Spoelstra and his teammate Udonis Haslem during a break. The foundation of this vaunted #warmthculture shows cracks.

The Heat were short-handed on the sidelines, where head coach Erik Spoelstra was absent due to his son undergoing a medical procedure. Assistant Chris Quinn was the substitute and the nets made it easy work with owner Joe Tsai watching from the sidelines.

It was a possible preview of a first-round matchup, a circumstance created by the Nets’ downfall in February from Durant’s sprained knee. In addition to the other possible first-round matchups against the Sixers, Bucks and Celtics, the Heat are probably the most favorable opponent. This iteration of the Heat in particular.

Either way, as Steve Nash conceded Saturday, the Nets will likely have to navigate a play-in game first.

“We are where we are, so we have to play what’s ahead,” Nash said. “And for us that’s probably the play-in game and all that matters is that we’re as prepared and as far forward as we can possibly be in the short amount of time to be in the play-in Game to play well.”

They certainly seemed ready to say “peace” to the battling heat on Saturday.