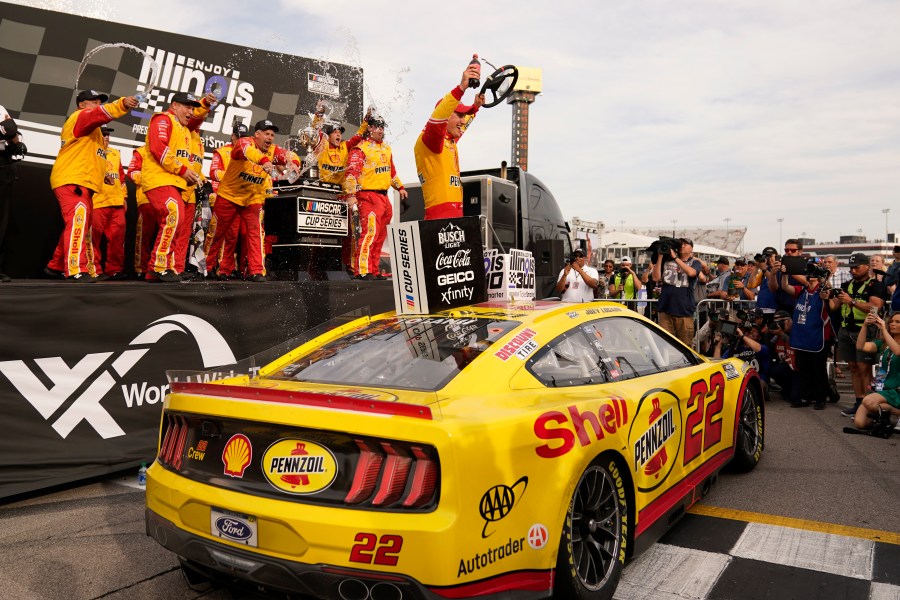 Logano made it a stellar day for Team Penske, who earlier in the day won the IndyCar race in Detroit with Will Power.

“It doesn’t get much better than that, with Kyle, one of the best, running for the lead and crossing back and forth,” Logano said. “I knew it was coming. I did it to him. I knew he would do it to me.”

Chastain got caught in both at different points, leading to a series of retaliatory actions along the track.

“It was horrible driving,” Chastain said afterwards. “It’s one thing to do it once. I kept driving into guys. At this level I have to be better. It’s a shame. I had all these people who believed in me. You deserve better.”

In the end, Logano had watched Kyle Busch pull away from him on a restart with 13 laps to go and then got another chance when Kevin Harvick crashed with five to go. That led to a green-and-white checkered finish at the 1 1/4 mile hairpin east of St. Louis, and Busch chose the outside lane as Logano drove his #22 car back inside.

This time it was Logano who won the drag race at Turn 1, moving up ahead of Busch, who crossed him and took the lead into the sweeping third and fourth turns. There Logano went deep and pulled forward to gain the space he needed to pull away as Busch came a little sideways out of Turn 4.

The first race of the Cup Series at World Wide Technology Raceway, just across the Mississippi from the Gateway Arch and downtown St. Louis, was an exciting throwback to the early days of NASCAR, when tempers in the cars were the same were hot as the temperatures outside – it rose to over 90 degrees Fahrenheit in the sun.

Chastain had a lot to do with it.

Trouble for the eighth-generation watermelon grower began in Stage 2 when Chastain slammed into Hamlin’s rump coming out of the first and second hairpins, sending the #11 into the outer wall.

Hamlin spent the rest of the afternoon getting revenge: he nearly ran Chastain onto the grass on the backstretch, then slowed down the track, nearly preventing him from reaching minimum speed.

“It’s good that he’s taking responsibility, but it ended up ruining our day,” Hamlin said. “I think we raced hard there for a while. He tried to slide further in front of us and couldn’t because I wasn’t willing to just back away and let him slide forward. It wasn’t long before he hid behind us that he destroyed us.”

Hamlin also had support. Chastain later came onstage to Elliott’s quarter panel and flipped him out. And when the running resumed, Elliott Chastain nearly hit the wall before Hamlin punched him.

The whole drama kept a sell-out crowd of more than 60,000 in the scorching afternoon sun.

Chastain was seventh, Elliott was 21st and Hamlin finished 11 laps down in 34th place.

FROM THE FRONT TO THE BACK

AJ Allmendinger won the Xfinity race in Portland, Oregon on Saturday and then flew to St. Louis to start at the back of the field on Sunday. Ben Rhodes was due to qualify his number 15 for Kaulig Racing but crashed at Turn 3 during practice and made no attempt. Allmendinger drove through the field and finished 10th.

Zane Smith, who finished ninth in Saturday’s Truck Series race, made his Cup Series debut in place of Chris Buescher, who tested positive for COVID-19 earlier in the week. Smith drove the #17 for RFK Racing to 17th place.

Martin Truex Jr. became the 32nd driver to make 600 starts in the Cup Series when he took the green flag. His first came on October 31, 2004 in Atlanta for Dale Earnhardt Inc. The 2017 series champion finished sixth in Sunday’s race.

The Cup Series hits the road course in Sonoma, California’s wine country, next Sunday before taking a week off.