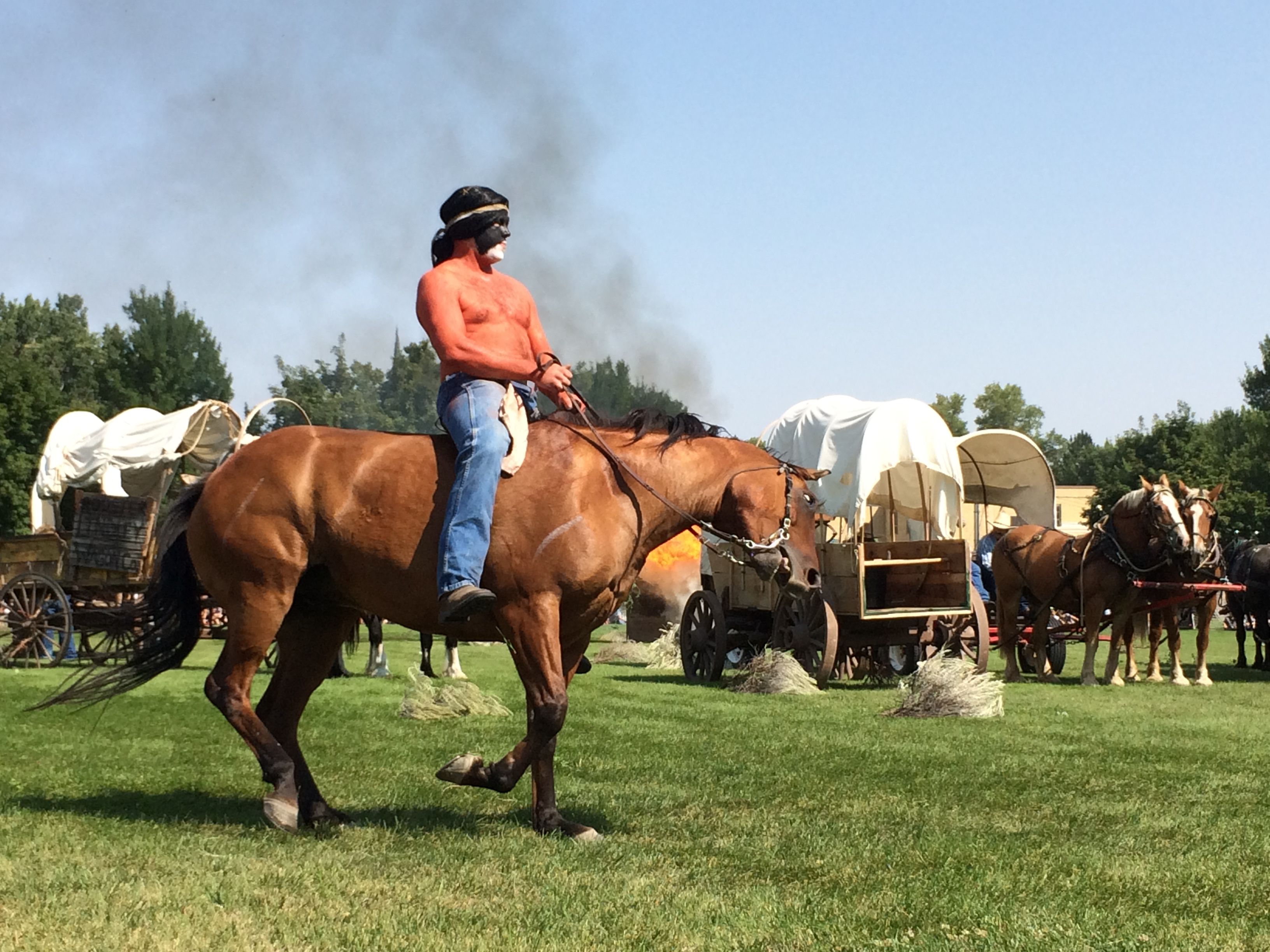 Wellsville • Because Utah wasn’t exactly a Civil War flashpoint, we’ve been isolated from the debate over whether the monuments to Confederate generals who fought to defend slavery should be torn down.

That doesn’t mean we don’t have our own relics of a racially disturbing history that we try to gloss over out of misguided reverence for a past that didn’t really exist. And ours are not cast in bronze.

A case in point is the “mock battle” that took place as part of the Founder’s Day celebrations in the city of Wellsville.

As they have done since 1916, more than a century ago, a handful of people from the idyllic town of Cache County paint their bodies crimson, don headgear and something resembling native outfits, and apply war paint to recreate an apocryphal clash between the Indians and the industrious Mormon settlers.

This is apparently something people in Utah are still doing in 2017.

“We don’t do blackface, but we still do things like that in the United States,” said James Singer, the co-founder of the Utah League of Native American Voters, who teaches sociology at Westminster College and Salt Lake Community College.

“It’s absolutely appalling. I don’t know how we can be so completely insensitive,” he said. “Even at this time, when it’s okay to be politically incorrect in the age of Trump, when it starts interfering with their own actions, people who profess to value their neighbors and their feelings ignore it.”

Thousands descended on the baseball field behind Wellsville’s Old Elementary School Monday to see the culturally deaf cowboy and Native American extravaganza that all hinges on a brazen rewriting of history.

A teepee was erected behind home plate, a shack stood in midfield, and wagons circled the area as the makeshift natives arrived on horseback, yelping and firing guns the way spaghetti western years have taught us their behavior.

A hoarse-voiced narrator relates the scene: The Shoshone hunted and gathered in the fertile area when industrious white settlers moved to Cache Valley in 1856. how the settlers hunted animals with their “fire sticks” and sang songs around the campfire.

tensions grew. A small replica hut is set on fire and the narrator tells how the Indians stole horses and cattle and kidnapped small white children.

“Even with the capture of their own children, the settlers stayed. They were determined to make this their home,” the story reads. Troops came from Fort Douglas to stop the Indian attacks, and the narrator triumphantly proclaims that they fought the Indians at the “Battle of Bear River.”

The reality is, as always, not so tidy.

The Mormon settlers in Cache Valley had driven the Shoshone from their ancestral lands and the starving natives carried out raids and skirmishes on the settlements and wagon trains, which were followed by retaliatory raids, skirmishes and executions.

In 1863, about 250 soldiers from Fort Douglas attacked a Northwest Shoshone winter camp at Bia Ogoi, near present-day Preston, Idaho. The Indians fought back, but after two hours the ammunition ran out.

The troops raped the women and hit others on the head with axes. Small children were held by their ankles and their heads banged open.

An infant was thrown into the freezing river and drowned. Chief Bear Hunter, a leader of the band, had a hot bayonet rammed through his ear. Winter crops were stolen and 75 cottages burned down.

All in all, up to 500 Shoshone were wiped out, and historians now consider the Bear River massacre to be the bloodiest massacre of Native Americans in American history.

That alone should tell us something: If the people of Wellsville can’t tell the whole story, it’s time to get off their sanitized cowboy and Indian costume.

We must be able to remember our legacy and celebrate the perseverance of the pioneers while acknowledging that our history is messy and complex and we should not hide the truth under layers of red body paint.

https://www.sltrib.com/news/2017/09/06/gehrke-historically-inaccurate-and-wildly-offensive-a-utah-town-should-end-its-annual-sham-battle-between-cowboys-and-indians/ It’s 2017, but people in Utah are still putting on “redface” for an inaccurate recreation of a Native American vs. Mormon battle