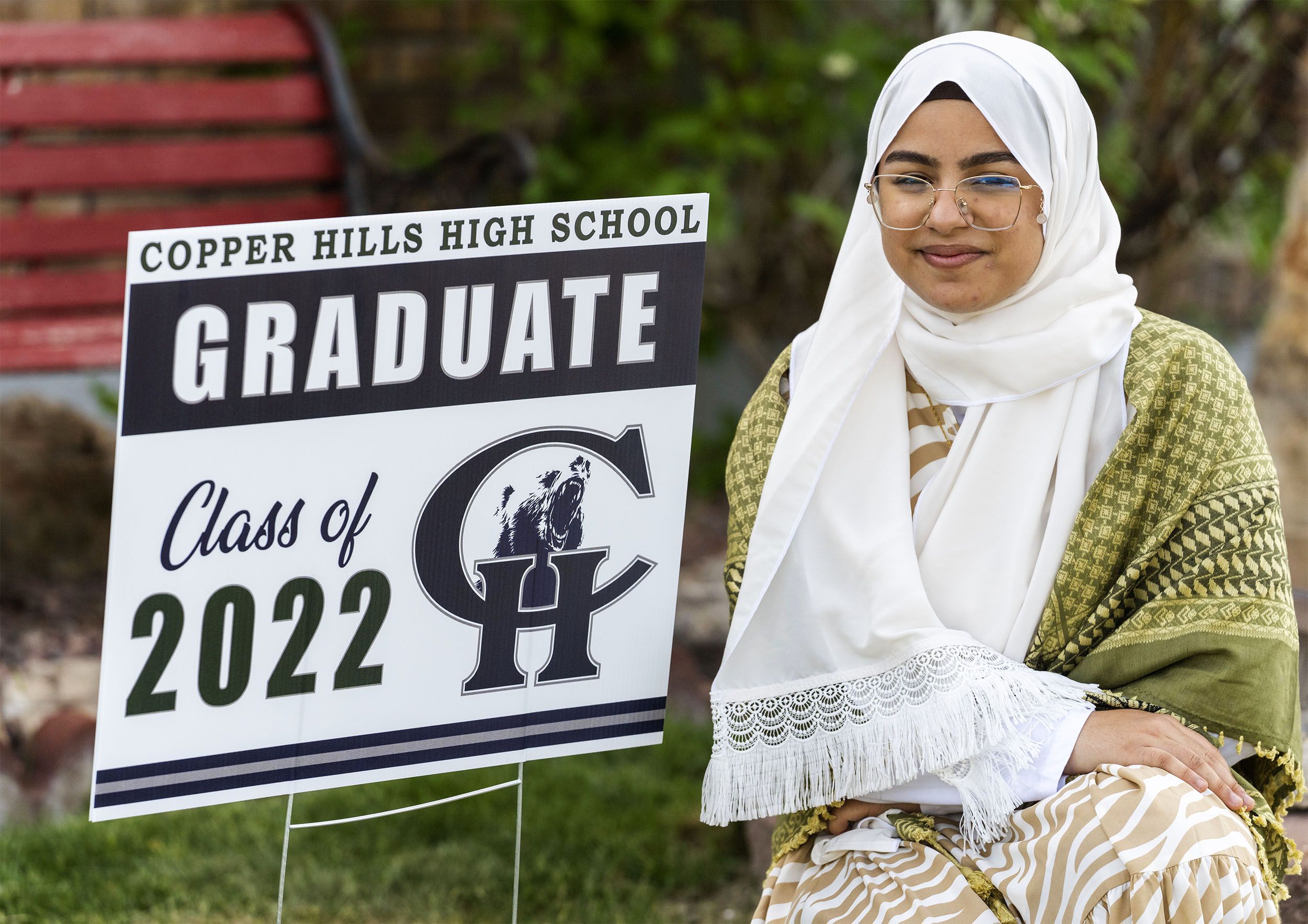 Fatima Al-Saedy only heard fragments of her father’s story. His journey, from being a rebel during the war in Iraq, to ​​living in a refugee camp and finally arriving in America, she said, was too difficult for him to share all at once.

Al-Saedy sees how different her life was from her father’s, she said. But she feels the microaggressions she faces every day – for the hijab she wears and the color of her skin – have left her no choice but to continue his defiant spirit.

She wanted to honor her ancestors by wearing a keffiyeh – a traditional Arabic shawl – over her dress at her upcoming graduation on Thursday. When her principal at Copper Hills High School informed her that a Jordanian school district policy banned all non-academic regalia, she said, she decided to take a stand.

“To be honest, being an Arab has been a problem all my life,” Al-Saedy said. “If I want to show my liberation and pride in my culture, that has turned against me.”

Utah lawmakers passed HB30 earlier this year to guarantee that Indigenous students registered with a particular tribe can wear symbolic regalia such as feathers, beads, or traditional dress or moccasins at their graduation ceremonies. This new law required members of the Jordanian school board to update their policies.

Al-Saedy and other students, including those who want to honor their Polynesian and Latino heritage, urged board members to offer equal protections to all students.

In late May, after also hearing from parents, teachers and supporters, board members voted unanimously to allow students to wear culturally significant clothing to graduation ceremonies on Wednesday and Thursday.

“I think the students were really important in that decision,” Tracy Miller, school board president, said in an interview. Members will later decide whether to make this year’s suspension of the policy permanent.

Here are three of the students who led the prosecution this spring.

(Rick Egan | The Salt Lake Tribune) Fatima Al-Saedy wears a keffiyeh (a traditional Arabic scarf) that she plans to wear with her cap and gown when she graduates from Copper Hills to honor her family.

Al-Saedy, 18, thought it was the district’s previous policy that prevented students from wearing anything that their school hadn’t given them, such as a shirt.

She heard from her principal, she said, that teachers would ask students to leave if they were wearing anything that violated that rule.

Wearing her seven honors medals and a medal she received as a Sterling Scholar Award finalist would mean nothing, Al-Saedy said, if she weren’t wearing her keffiyeh. Her greatest achievement is being a first-generation Iraqi-American graduate, she said, and she wants to celebrate that.

Al-Saedy initially had problems at school because she grew up speaking Arabic. It took her a few years to really commit, she said, after her parents urged her to try as hard as she could.

“They told me, ‘This is the only way our family can rise and move on because we just can’t fail,'” she said.

Her father, Hakim Al-Saedy, opposed Saddam Hussein’s regime at the end of the first Gulf War in Iraq in 1991, Al-Saedy said. He and other rebels occupied one of Iraq’s largest cities, Amarah, but had to flee for his life when Hussein threatened to send troops into the city, she said.

After a perilous escape to a refugee camp in Saudi Arabia, Hakim Al-Saedy spent five years in the desert waiting to be granted asylum in America by the United Nations, she said. Eventually he got a visa and settled in Utah, close to some of his friends from Iraq.

Al-Saedy and her twin brother Mohmmad, both of whom spoke at the board meeting ahead of the members’ vote on May 24, were the main translators for their parents “once we learned English,” she said. However, she never felt this responsibility as a burden. She thought everyone had to translate for their mother when they went to the hospital, she said.

Growing up as an Iraqi American was difficult “because people already have prejudices about who you are. …. They already think they know your story before you can even tell it,” Al-Saedy said.

She was editor-in-chief of her school newspaper, urged administration to host a “cultural carnival” for students to celebrate their heritage a few weeks ago, and helped organize a committee of colored students to meet with school administrators every month.

She also encouraged her friends to speak to the board and took to social media to call for the graduation policy to be changed.

“I’m glad they were suspended [the policy]’ said Al-Saedy. “…And I’m glad we’re all involved in the revamp.”

Al-Saedy will attend the University of Utah this fall and hopes to become a doctor, with intentions of eventually joining the Doctors Without Borders program.

Jadiahne Ioane: “We are more than just flower chains.”

(Rick Egan | The Salt Lake Tribune) Jadiahne Ioane would like to wear traditional attire when she graduates from Valley High School.

18-year-old Jadiahne Ioane wanted Polynesian students to be able to wear leis over their dresses and a traditional Tongan skirt called a taʻovala underneath.

She led a push by Hawaiian-Pacific Islander students and their parents against the ban after questioning her principal, principals at other schools and even calling the district several times, she said, seeking an explanation as to why it was put in place.

Some administrators said the purpose was to unite the student body, she said, and others said it was to avoid additional cleaning costs, as leis can be messy.

“Such limitations are the reason why students of color do not feel comfortable and accepted in today’s society,” she told the school board in April.

Graduation ceremonies are particularly important in Polynesian culture, Iaone said. Many of the speakers at the May board meeting pointed out that the presentation of a lei at the graduation ceremony is a symbolic way of bringing past generations into the present.

Iaone wanted to wear shell necklaces her grandmother had brought from the islands to pay homage to her and her other ancestors, she said. Ianoe’s grandmother died in 2020.

(Rick Egan | The Salt Lake Tribune) Jade Ioane would like to wear traditional clothing when she graduates from Valley High School.

“I hope you can understand that we are more than just flower leis,” Iaone told board members. “We are descendants of people who gave up everything for us. And we pay homage and recognize them through our cultural dress for the privilege and blessings we are allowed to endure because of their sacrifices.”

Before the board suspended the policy, Ianoe said, her principal had hinted to her that Valley High School would be lenient about allowing cultural attire. But Ianoe wanted to stand up for her friends in other schools.

Yadhira Zavala: ‘Add these symbols where we come from.’

Yadhira Zavala knew her ancestors would be proud of her because she fought to represent them no matter what the school board decided, she told members in April.

“Graduation is about celebrating all the things we’ve accomplished. So why can’t we include these symbols of our heritage to honor ourselves, our culture and heritage?” she asked.

Zavala suggested that students should be allowed to wear sashes with symbols representing where their families are from, or allow students to wear flags as sashes over their dresses.

If the Jordan School District and its board are to truly embrace diversity, they need to adjust policies to be more inclusive, Zavala said.

“Our struggles and hard work should be noted,” she told the board. “My ancestors made no sacrifices to prevent me from fighting for my community and using my voice for my people.”

Jasmine Roque, another Latina student who graduated from Copper Hills High School, told the board that she was called insults because of her background and was urged to “return to her country” during her time in the district. Graduating in cultural dress is not only a way to honor her ancestors, she said, but also to prove wrong to those who have discriminated against them.

“If this district is trying to make the student body more acceptable and diverse,” she said, “students should be allowed to graduate in wearing cultural attire that is similar to the diversity that is being promoted in our school district.”

https://www.sltrib.com/news/education/2022/06/01/native-students-can-wear/ Indigenous students may wear regalia at graduation ceremonies in Utah. What about seniors who want to honor other cultures?

The US launches initiatives to strengthen economic ties with Taiwan

In east Sydney, a “deteriorating relationship” between an elderly couple has ended in murder allegations

When is the Eurovision 2023 host city announcement?