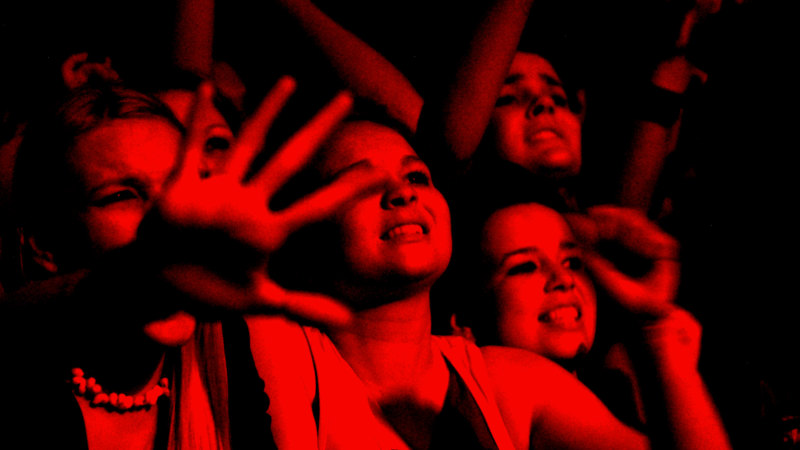 I refused to panic and told myself I would find them outside after the concert. So I let the crowd take me as they moved towards the stage.

As Bring Me the Horizon took the stage, the crowd pushed forward, fans screaming. Dark-haired frontman Oli Sykes bled with charisma, his heavily tattooed, lean body jerking to the heavy bass. I was so overwhelmed that I didn’t notice the crowd moving behind me.

My very first mosh pit was unexpected. I didn’t notice people circling behind me until a fast, high-pressure ring of people formed. Someone tugged at my ponytail and pulled me into the sea of ​​bodies. Before I knew it, I was on the ground covering my head as people pounced on me.

Close to tears, I began to believe that this was how I would walk—on the sticky floor of a run-down warehouse. But then I felt a tug on my backpack and was pulled out of the crowd. I turned to thank my savior, but they had already turned away to help other concert newcomers.

Slightly traumatized, I regained my composure and continued screaming to the music. It was only about 10 minutes before what I later dubbed the “wall of death” began. The crowd parted like the Red Sea. As one side started rushing toward the other, I closed my eyes and waited for the bones to crunch.

Somehow the Death Wall left me unharmed except for a few bruises. I can barely remember the rest of the set, I was so exhausted and overwhelmed. But I remember thinking Oli Sykes was looking at me, which made every near-death experience feel worthwhile.

After the gig I found my friends outside of the venue. We all gushed about how great the set was and ignored how scared we all felt.

As I climbed to the safety of Pia’s car, I believed the trauma was over. But 20 minutes down the freeway, we were signaled by the car behind us to stop. The car had no signage so my friends and I all asked Pia to continue. Pia, while nervous, was more afraid of possibly disobeying a cop than being skinned by a killer, so she followed the car down a dark side street.

Having survived the mosh pit, I was now convinced that we were facing our doom and preparing to die next to cows in a Swiss pasture in the middle of nowhere.

But this was Switzerland, one of the safest places in the world. The car turned out to be undercover cops who told us Pia’s taillights weren’t working.

I thought I would die three times that night. But I didn’t. Thinking of death knocking on your door can teach a teenager a lot about life outside of the safe bubble of home. I went to this concert feeling like a mature, independent adult. I left wanting nothing more than a hug from my parents.

https://www.smh.com.au/culture/music/i-got-crushed-in-the-mosh-pit-but-survived-the-death-wall-my-first-concert-experience-20221121-p5c02f.html?ref=rss&utm_medium=rss&utm_source=rss_culture I got crushed in the Bring Me the Horizon mosh pit at my first concert

"I guess I'm a mankadder now"

City is set to overtake Sydney as Australia's largest by 2031

Humans are the real plague