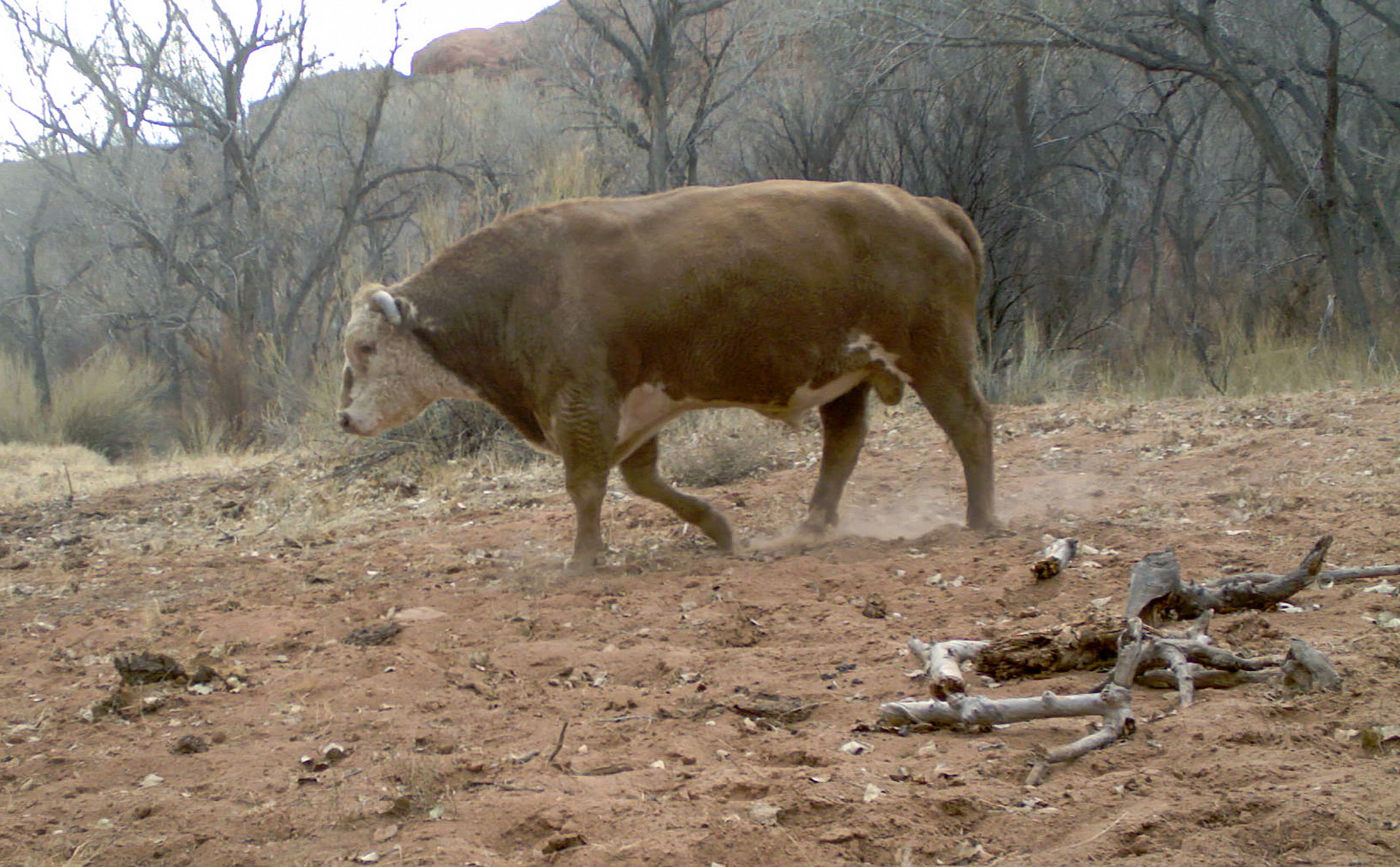 In recent years, a herd of at least 30 wild cattle have settled in the remote lower canyons of the Escalante River, a fragile desert riparian zone in two of Utah’s protected landscapes.

These cows, or their mothers, likely once belonged to ranchers who held permits on neighboring lands, but the animals escaped their native herds and are now happily breeding in sensitive areas closed to grazing, Bureau of Land Management officials said. But the agency is reluctant to unilaterally rid the lands it administers of stray cows, which are technically county property.

In this case, Garfield County reluctantly took on the complicated task, contracting with wranglers to get the cows back to civilization as safely as possible.

Harry Barber, manager of BLM’s Paria River District, commended Garfield for working with federal land managers and taking the lead, but district leaders remain upset that an easier solution was not found.

“The Escalante River is pretty wild, pretty remote. We have legitimate permits that allow livestock to graze in the area,” said Harry Barber, manager of BLM’s Paria River District. “The Escalante isn’t open to grazing and these people know that, so they do their best to keep their cattle out of there, but when cows escape and wander in there, it’s difficult to get them out.”

According to Mike Popejoy of the Grand Canyon Trust, the cows move between Grand Staircase-Escalante National Monument and Glen Canyon National Recreation Area. The lands in question are federal grazing land that the Trust paid into retirement about 20 years ago to allow these lands along the Escalante to return to a natural state.

Some of the cows monitored with trail cameras appear to be tagged or branded, but many are unbranded, Popejoy said.

The group is frustrated that there was a great expense in closing these allotment gardens, only to see cattle visitors roaming fragile riparian areas again, this time unsupervised. Environmentalists are dismayed because most of the national monument is grazed. Cattle-free areas allow state land managers to compare the health of grazed and ungrazed land within the monument.

This advantage is lost with the presence of stray cattle. In a recent interview, Popejoy made it clear that the Trust has never asked anyone to shoot the cattle, but he wants the animals out.

“There shouldn’t be any cows,” Popejoy said. “It’s been over a year, maybe a few judging by the number of unbranded cows. Obviously they are reproducing and the herd is getting bigger.”

County Commission Chairman Leland Pollock, a Panguitch businessman descended from generations of ranchers, is frustrated with the whole situation, which he attributes in part to the Grand Canyon Trust’s unwillingness to preserve the miles of fences that have stretched back decades long been built by previous licensees.

“One of the problems you have with these allotments that are bought up by these people who use them for political reasons or whatever, they have to maintain the fences,” Pollock said. “We are talking about kilometers of fencing here. If you don’t maintain fencing, you won’t keep livestock. They will go where they want.”

Those locations include Harris Wash, Fence Canyon and Horse Canyon, according to Popejoy, who denies that fences are the trust’s responsibility.

“These areas are closed and cows are coming down from both sides of the river,” he said. “It’s a challenge to have fences that work when there’s flooding every year.”

Pollock would have preferred to allow ranchers on adjacent plots to mix their cattle with the wild and pull them out all together later that year.

“The way you do that with wild, feral cattle is to put them together with other domesticated cattle. You are calm. They don’t all have problems with wild cattle,” Pollock said. “It’s hard to catch wild cattle, let’s face it. It’s like going out and catching moose.”

Ranchers had volunteered to retrieve the feral cows, but the BLM rejected their proposal, according to Pollock.

“They wanted to go there and house these cows with their cows for a couple of months and then just sort of get them out of there. Easy. Period. Problem solved,” he said. “You didn’t accept this offer. For whatever reason, I don’t know why they don’t use common sense on an issue like this.”

As part of his contract with Garfield County, Grover covers most of the cost of finding strays and driving them out of the backcountry. Much of the work has to be done on horseback as the cows are in areas where motorized use is not allowed. Grover will return tagged cattle—for a fee—to the ranchers whose tags the cows bear. Unbranded cattle will be owned by Grovers to keep or sell as he sees fit.

“Several trips will be required. It might be a year or two before we can get them all out,” Grover said. “It’s so far away from everything. It’s very isolated. It will be a daunting task.”

He won’t start until the fall so the work can be done in cooler weather. Summer temperatures would be too harsh for the cattle and the dogs and horses Grover uses.

The cattle are to be freed from Escalante’s side canyons, about a dozen miles from the nearest access road off the Burr Trail. The round trip for the dogs and horses would take up to 24 miles.

“They won’t get much money if we invest. That’s not why I do it,” Grover said. “I’m doing this for the adrenaline.”

https://www.sltrib.com/news/environment/2022/06/01/how-few-feral-cows-are/ How some wild cows in Utah cause a big headache

Should I name my spouse or trust as the beneficiary of my 401(k) and IRA?

Man puts egg on stage. is this art

How secure is my pension and will it be affected by economic turmoil?