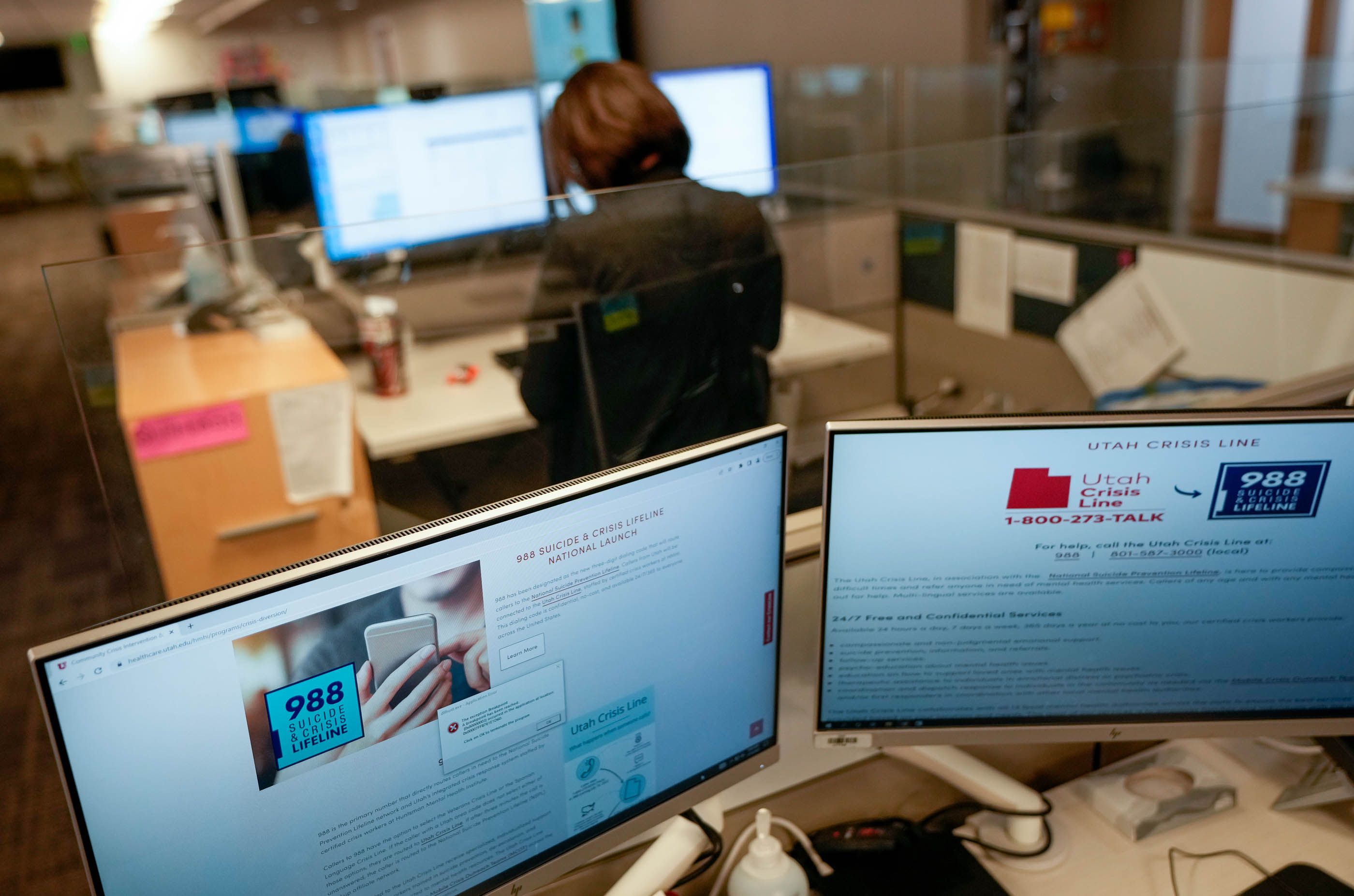 Dina Nielsen works with young people struggling with their mental health and suicidal thoughts for her job as Crisis Intervention Manager for an online college.

When a friend turned to Nielsen for help finding resources for her daughter’s mental health, Nielsen’s first instinct was to call 988, the national three-digit suicide and crisis rescue line.

Instead of hearing a human voice, Nielsen was surprised when she was greeted by an automated voice.

Nielsen waited about three minutes before handing her over to a crisis responder. She says once connected she explained the situation and the crisis center reached out to her friend who received the help her child needed.

“My friend got really good service from this and I’m confident they’re doing what they need to do,” Nielsen said. The only thing that bothered Nielsen was the longer than expected wait time.

She wishes there was more information on what to expect when calling 988, so those in crisis know it can take a few minutes to reach someone, but once they do, they get the support they need.

“If you build that expectation, you’re prepared and not deterred,” Nielsen said. “That’s the only thing missing.”

It’s been five months since the National Suicide & Crisis Lifeline switched from a seven-digit number to the simple and easier to remember 988. The Tribune spoke to the people leading the state lifeline, leaders campaigning for the changes, and mental health professionals about their hopes for the service and its future in improving mental health care in Utah.

Overall, Utah’s 988 rollout has gone well, but progress is still being made in increasing staffing levels, closing the gaps between rural and urban supplies, and building crisis reception centers.

“I think we were already ahead of the curve,” said Rachel Lucynski, director of community crisis intervention and support services at the Huntsman Mental Health Institute. “Obviously there’s still a lot to do, but I think we’ve just had a lot of support that has helped us gradually grow and prepare to meet the demand for these services.”

Why the comparison with 911?

The move to 988 was more than just a number change. Some dreamed that 988 would become the “mental health system equivalent of 911,” said Republican Senator Dan Thatcher, who represents Magna and other areas in western Salt Lake County. Thatcher was one of the main proponents of the crisis line.

But the system isn’t quite the 911 for mental health advocates like Thatcher envisioned. Some are concerned that early promotional efforts to compare the two numbers so closely may have created confusion.

(Francisco Kjolseth | The Salt Lake Tribune) Pictured on Friday, November 4, 2022 are tools used to spread the message at the 988 Suicide & Crisis Lifeline call center in Salt Lake City, where all calls in Utah are routed. The call center, one of many across the country, continues to grow as they provide immediate access to crisis intervention and behavioral health support.

“It’s a double-edged sword because we want people to remember, yes, it’s a three-digit number starting with a nine for a mental health emergency,” Lucynski said. “That’s actually where the comparison with the 911 should stop.”

When someone calls the lifeline, there is an option for veterans, Hispanic speakers, and those who identify as LGBTQ. If you don’t choose one of these options, simply wait on the line for the first available responder.

Listing these options takes time, but “there are many benefits of receiving specialized care for people in these specific populations,” Lucynski said.

The longer wait times for 988 are also a feature of the service — unlike 911, people who answer the phone don’t quickly initiate services, instead taking the time to listen to and understand each individual caller.

“When you connect to the 988 suicide and crisis lifeline, it’s a different experience,” Lucynski said.[Our team] works to provide compassionate, empathetic listening and support, to de-escalate an emotional crisis, and to assess the level of active suicide risk or safety someone is currently experiencing.”

The Huntsman Mental Health Institute also runs a “warm line” staffed with peer support specialists for times when someone is emotionally seething rather than boiling, Lucynski said. “If you just need someone to listen and offer that reassurance and support, talk about some life challenges.”

What are the response rates?

On average, lifeline calls last around 20 minutes and between 86% and 90% of calls are resolved over the phone. According to Lucynski, around 6% to 8% result in mobile crisis response deployments. Mobile crisis teams that respond to crises in person include a master-level clinician and a peer specialist.

“It would take so many more staff and so much more money in Utah and across the country to really have the capacity that 911 has,” Lucynksi said.

If calls are not answered by the Utah Crisis Center within two minutes, they are routed to the national center and answered by someone out of state.

Huntsman data from September 2022 showed that crisis line workers had an 85% response rate in the state, and 90% of those calls were answered within 30 seconds.

“We usually respond very quickly,” Lucynski said. “However, you cannot predict when people will hit a crisis. So having a flood of calls coming in at the same time can impact response rates.”

How are rural needs met?

The pursuit of mental health care in Utah isn’t just about someone answering the phone.

The state has long had mobile crisis response teams, made up of licensed mental health professionals, who can go out and assess a situation rather than have the police show up. These services can be crucial as interactions between people with mental health problems and the police can lead to real harm. A 2021 Tribune study found that at least 42% of police shootings over the past decade involved a person in crisis or suicidal.

Forward-looking plans include the creation of more “crisis reception centres”, a place next to the prison or hospital emergency room where people with mental health crises can meet with psychiatrists, social workers or peer specialists. Davis, Utah, Weber, and Salt Lake counties all currently have reception centers.

(Francisco Kjolseth | The Salt Lake Tribune) The 988 Suicide & Crisis Lifeline call center in Salt Lake City, where all calls in Utah are routed, is pictured Friday, November 4, 2022. The call center, one of many across the country, continues to grow as they provide immediate access to crisis intervention and behavioral health support.

The Huntsman Mental Health Institute has operated a small reception center for the past 12 years, but an expansion to a 78,000-square-foot facility is underway. The facility will have 30 chairs, 24 private inpatient units and a floor with a wealth of resources from a free dental clinic to intensive outpatient programs, said executive director Ross VanVranken.

“We hope to have the interior completed by the end of January and be able to receive customers there,” she said. The facility will be open 24 hours a day, all year round.

“We don’t want people who go to prison who could really be better served with mental health intervention,” she said. “And we don’t want people going to emergency rooms, where they might find well-intentioned doctors who might not have all the answers to intervene with someone who is going through a crisis like this.”

In the coming months, the center plans to expand 988’s chat and text capabilities — which will require more staff. Huntsman wasn’t immune to a tough hiring market, although offering benefits and a starting wage of $20 an hour helped. The center also wants to hire a more geographically representative workforce and is scrambling to hire crisis workers who live across the state — they’ve hired their first fully remote worker outside of St. George.

Hiring more staff will be key to expanding the center’s capacity as demand and awareness of 988 grows. As of October, Lucynski’s department had 130 employees and was expected to reach about 200 by the end of the year.

Overall, nationwide promotion of 988 has been slow to avoid overloading call centers. A nationwide analysis of call volume by the Kaiser Family Foundation found that July 2022, the month that 988 launched, saw a 28% increase in calls, texts, and chats. But the following month, that growth slowed to just 2%.

But in the summer of 2023, Lucynski expects to launch more national public awareness campaigns.

“If you’re on hold for five minutes, you’re not allowed to call anymore,” she said. “So it’s really a delicate balance of making sure people know about the service, but that marketing doesn’t push occupancy so high that it exceeds capacity.”

(Francisco Kjolseth | The Salt Lake Tribune) The 988 Suicide & Crisis Lifeline call center in Salt Lake City, where all calls in Utah are routed, is pictured Friday, November 4, 2022. The call center, one of many across the country, continues to grow as they provide immediate access to crisis intervention and behavioral health support.

Even lawmakers like Thatcher are still working to improve mental health care in Utah.

Thatcher, who is now chair of a national mental health group, plans to assemble a team of like-minded lawmakers “to essentially create a blueprint for how to create a fully operational, robust, and proven continuum for mental health crises.

“My expectation,” he said, “is frankly to get society to where it’s accepted that mental health and behavioral health are treated the same as physical health.”