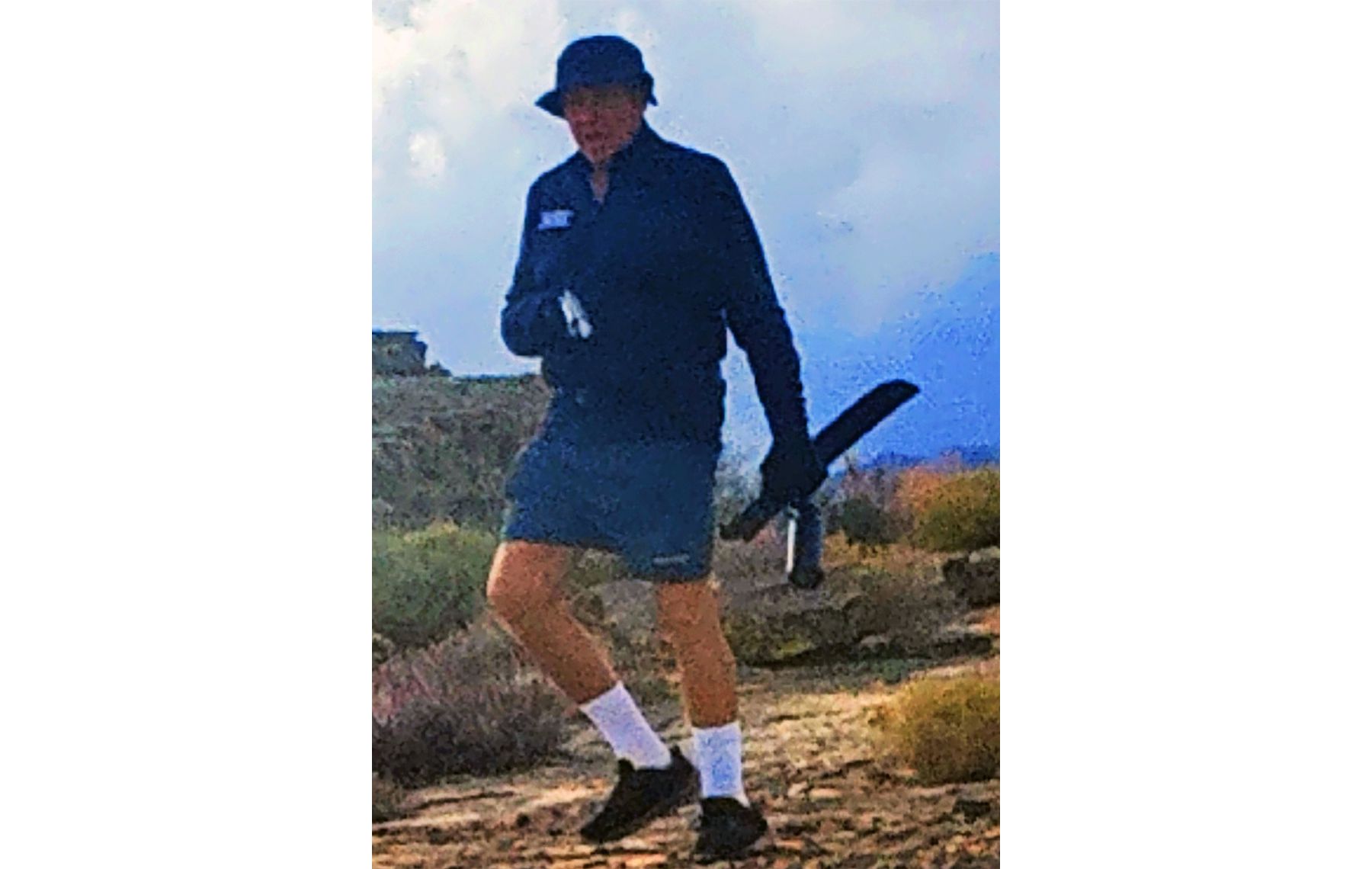 St George • A gunman soliciting hikers who walk their off-leash dogs on the Bureau of Land Management (BLM) trails in the area is either a mad vigilante who poses a threat to others, or someone legitimately concerned about his Security fears and exercises its fundamental right to bear arms and defend oneself.

Hikers who have bumped into the man believe the former, while the Washington County Sheriff’s Department so far leans toward the latter. That enraged Jaden Turner, who says her December 5 altercation with the man on BLM land on the Santa Clara reservation left her devastated and feared he would kill her and her dog.

Turner was walking along the cliffs of Land Hill, not far from the Tukupetsi Trailhead, that afternoon with her dog, Baz, a cattle dog she rescued from a Texas kill shelter, when she saw a man climbing the hill in front of them briskly walk into her Direction.

No sooner had the St. George resident shouted “hello” and told the older man that Baz was being friendly, she said, than he began yelling at her, calling her the “C-word” and unleashing a barrage of other profanity. She said the man – who wore a Second Amendment on his blue warm-up jacket and was armed with a machete – also started reaching for something.

“I was speechless,” she recalls. “He pulls out a gun, points it at both of us and says, ‘I’ll shoot you and your dog if you don’t leash him.’ “

Turner recalls stepping in front of her dog to protect him and trying to get him on a leash while simultaneously telling the man that her dog posed no threat and that a leash was not required on BLM land.

(Jaden Turner) This cellphone photo shows a Second Amendment patch worn by an unidentified man during a hike near Santa Clara on December 5, 2022. Turner and others allege the man used guns to harass hikers with dogs unleashed.

Officials say the county’s leash laws are in effect on BLM land, but even as she put the leash on, she said, the man kept coming and pointing the gun at her and the dog.

“He kept rampaging and said, ‘I’m going to shoot you and your dog,'” she said, adding that she fiddled with her phone but managed to snap a few pictures of her verbal attacker.

When she tried to veer off the trail to let him pass, Turner said he followed her and continued his non-stop threats, but ended up holstering his gun. She then told him she would call the BLM rangers, who would be waiting for him at the trailhead, and arrest him for brandishing a gun and threatening her with a gun on federal land.

“Well,” Turner recalls saying, “I’m just going to wait for you down in the parking lot and shoot you there because Washington County law says I could shoot you both.”

Turner recalls walking her dog backwards to the top of the hill, afraid to turn her back on him as he descended in the opposite direction to the trailhead. Eventually, she and Baz made it back to their vehicle, which had an index card attached with the county’s leash ordinance attached to it by the man, and drove home.

After emailing the BLM about the incident the next morning, Turner said she was visited by two sheriff’s deputies that evening, who informed her that they were aware of her incident and another incident on December 5 responded, in which the man allegedly wielded a machete and threatened another woman who was walking her dog off-leash. They asked her for information that might help them locate the man and asked her if she would be willing to press charges if they arrested the man, she said.

While the BLM has law enforcement officers patrolling reserve land, the Washington County Sheriff’s Department assists the federal agency in patrolling the areas. The BLM has not yet commented on this topic.

Turner said she posted her pictures and a description of the incident on the Washington County Community Watch Facebook page and relayed several tips she received from group members about other incidents involving the man to investigators, but never anything from them heard.

Washington County Sheriff’s Spokesman Sgt. Joel Hafoka told The Tribune on Wednesday that deputies were able to track down the man, an Ivins resident who is in his 70s. He said the man, whose identity is being withheld, told deputies he told Turner to put the dog on a leash because it appeared the dog was going to bite him and that he had a gun and she did would use if necessary to protect himself.

“It was… ‘He said, she said’ at that point,” Hafoka told investigators. “There was evidence that a firearm … was involved by the other party, but that it was not pointed or pointed at anyone. It was used more as a defense mechanism [toward] the dog that was off the leash.”

(Jaden Turner) A hiking trail near Santa Clara. Turner and others allege an unidentified man used guns to harass hikers with dogs unleashed.

The MPs’ conclusion on the incident contradicts several leads Turner received from people who saw her Facebook posts. She said several people told her they encountered the man on the trails while walking their dogs off-leash and were threatened with a machete or gun, but were afraid to go to the police or publicly about it to speak the incident fear of retribution.

One who isn’t is St. George resident Lance Snarr. He has not seen the man draw a gun or machete, but the two encounters he has had with him have convinced him that the man is mentally ill and poses a serious threat to public safety.

Snarr had his dog on a leash a few months ago on the Paradise Rim Trail in the Red Cliffs Reserve Area near Snow Canyon. He was about 30 yards behind a young woman walking a well-behaved off-leash dog when he saw a man approach her.

“He totally freaked her out,” Snarr recalled. “He called them the ‘C-word’ and ‘MF-in’ this and that. It was a brutal verbal assault on this young lady… and I thought I might have to step in for her safety because he was so insane. I wasn’t sure if he was going to get physical. Luckily he didn’t. As he kept walking towards me, he said, ‘I’m glad to see your dog is on a leash, not like that, c— down there.’ ”

Two weeks ago it was Snarr’s turn. He was walking his dog off-leash along the same path when he saw a man approaching in the distance and quickly put the leash on, unaware that the person was the same man he had encountered before.

Snarr said other walkers he spoke to had had almost identical encounters. For her part, Turner is furious with the Washington County Sheriff’s Department, arguing that they haven’t thoroughly investigated the issue or spoken to everyone who had arguments with the Ivins man.

Sergeant Hafoka said the department could not speak to the other alleged victims Turner was referring to without speaking to them.

“As far as I can see, none of them have called the sheriff’s office,” he said. “I find [the Turner incident] is the only one we’ve heard of so far. And so we can only examine and process this one [case] that we have. Well, if this is a concern of others who feel that there is a violation of the law, they can contact us [the] Sheriff’s office so we can investigate.”

https://www.sltrib.com/news/2022/12/15/hikers-want-protection-armed/ Hikers want protection from armed “vigilantes” who allegedly abuse them for letting their dogs off-leash

Must-pack pieces for your winter holiday