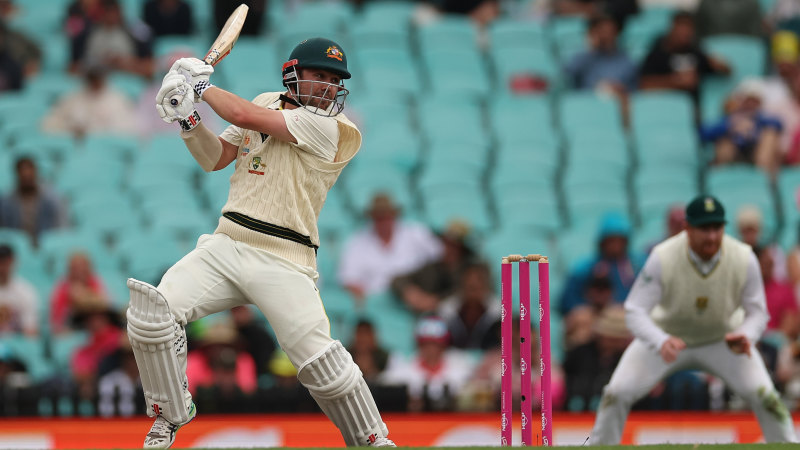 The discrepancy between Head’s record at home and away is well documented. He has an average of 57.4 in Australia and 21.69 in tests away.

“It was pretty entertaining, wasn’t it?” Smith said when asked about heads innings after the game. “I love to sit back and watch him do it. Right now he’s just hitting with so much confidence and so much freedom. It’s incredibly difficult to bowl, especially when you already have a decent score on the board and we’ve drained the bowlers a bit.

“All summer he’s been playing innings when the bowlers were fresh and they were countering, so he’s a great No. 5 for us at the moment. He plays wonderfully and may it stay that way for a long time to come.”

While securing a clean series win over South Africa is essential to qualifying for the Test World Cup final later this year, a four-Test tour of India starting next month is for the Pat Cummins’ crew as tough a task as it gets.

Thursday’s heads innings were important for a number of reasons related to the upcoming India Series.

Of all the spots this summer, the SCG strip comes closest to what Australia expects in India.

While it’s by no means a frenzied gymnast, it’s a field that’s expected to become more and more spinner-friendly as the game progresses.

While Proteas tweaker Simon Harmer returned numbers of 1-109 after 31 overs, they certainly don’t reflect his promise with the ball.

Head continued to use his feet, as evidenced by his six on the ground, and his offside play against spinning balls has improved. In India, his technique is being tested in every possible way.

The South Australian left-hander has yet to compete in a Test in India but if he can repeat his home form on the subcontinent it could have what it takes to shape him as a player.

For all the faint optimism about Australia’s chances of winning a series in India for the first time since 2004, it’s worth remembering that their opponents have lost just two home tests in the last 10 years.

There was the Test against Australia in Pune in 2017, remembered by Steve O’Keefe with 12 wickets, and a loss to England in 2021 in Chennai.

Head is an under-the-radar trump card for Australia in India and judging by the evidence over the last few weeks he will give himself every chance to flourish.

https://www.smh.com.au/sport/cricket/long-may-that-continue-head-extends-golden-summer-with-india-exam-on-horizon-20230105-p5calt.html?ref=rss&utm_medium=rss&utm_source=rss_sport Head extends the golden summer with India trial on the horizon