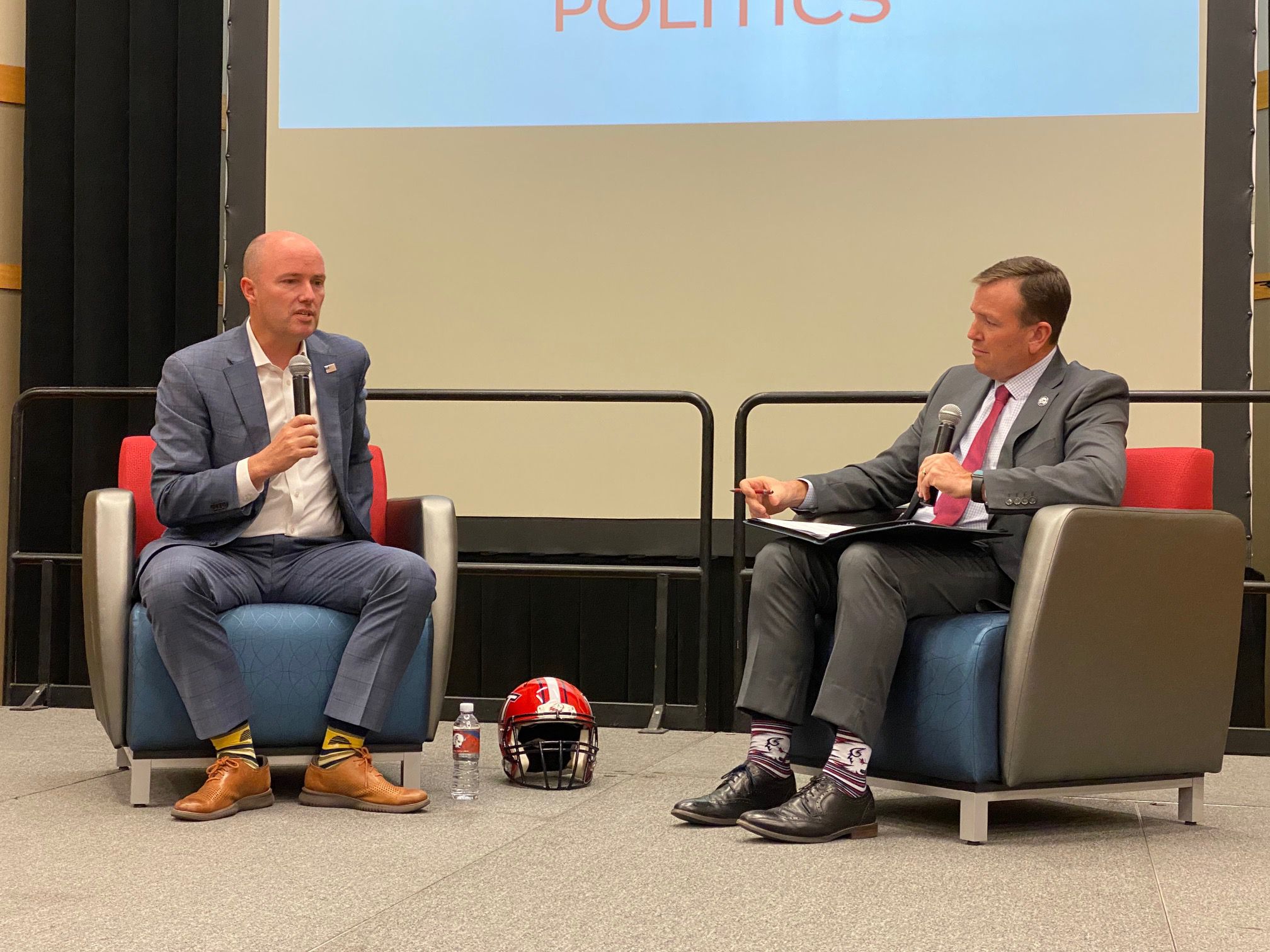 The governor of Utah also addressed the mega drought, saying, “Our climate is changing.”

St George • While he remains hopeful about the long-term prospects of the proposed Lake Powell pipeline, Utah Gov. Spencer Cox told faculty and students at Utah Technical University on Thursday that the near-term focus must be on managing the mega-drought that is wreaking havoc state haunted.

“Our climate is changing,” Cox told the estimated 300 people who packed the university’s Kenneth N. Gardner Student Center. “There isn’t an expert on the planet who can tell me if this is a 20-year drought, a 50-year drought, or a 100-year drought. All I know is that we have to deal with the water we have right now. And right now our reservoir level is very low, the Great Salt Lake is drying up and there isn’t enough water in the Colorado River or Lake Powell for what we want to do.”

During his hour-long visit, Cox answered a handful of questions from students and UTU President Richard Williams, which covered everything from the nation’s drought and broken politics to social media rudeness and the ills of cable news.

Of all the questions he’s asked, the governor said the most common is the water question. He said Utahns must work together to conserve water and find and provide new water resources so the state can continue to grow.

“If we can’t build houses, if we can’t let people live here, I’ll tell you right now what’s going to happen. The only people who will end up living in St. George are billionaires from California,” he warned.

As severe as the water issues in the St. George area are, Cox’s message to local residents is that they don’t have to face the drought alone.

“It’s not a St. George problem,” the governor added. “This is an issue in Utah and we are committed to working with you to resolve this issue.”

Asked later what that help might entail, Cox said it would primarily be about supporting Washington County’s solutions, saying local officials know what is best to address the water situation. When and if the Lake Powell Pipeline could become a reality, he said the state is “all in it” provided it has sufficient resources and gets the necessary approvals from decision-makers at the federal and state levels.

“But that’s not up to us,” he said. “We know about the drought and where the Colorado River and Lake Powell are right now, that [pipeline] will be a heavier lift… so I don’t know if it will happen or not, it’s entirely up to me. It’s probably more to do with Mother Nature.”

As for the nation’s political divisions, Cox called the polarization dangerous and unsustainable, attributing much of the problem to social media, a lack of participation in church and service organizations, and the relentless negativity and cynicism of the media, especially cable news shows .

“Cable media is evil,” he said. “CNN, Fox News, MSNBC … they’re all evil. They have psychologists to help them program things that get you hooked [Harvard professor] Arthur Brooks calls it contempt.”

Cox said the best decision he ever made was when he decided to shut down cable news broadcasts nine years ago. “And I haven’t turned it on since. I’m nine years sober,” he said.

To bridge the political divide and encourage more civility, Cox said it’s important to look for “the builders,” not the “dividers or destroyers.”

“There are people on the far right and the far left who are builders who want to make their community a better place and are willing to work with others to try and find solutions,” he said. “I’m not interested in owning the libraries. I’m interested in convincing the libraries that there is another and better way. Many will disagree with me. But if I can at least start having a conversation and listening to them, then I have an opportunity to show them why I believe what I believe and they’re more likely to listen… I think that’s how we solve the problem [our] Politics.”

Despite the drought, recession and other problems, Cox told students it was important not to give in to cynicism and naysayers.

“There has never been a better time in world history to live in the state of Utah,” the governor said. “And those voices trying to convince you that everything is collapsing around you, those aren’t the builders.”

Still, he added, there are some issues that need to be addressed. One of them is the family, which he says is in decline and at the root of societal problems such as homelessness, drug addiction and mental health. That’s why, according to Cox, the state created the first-ever Office of Families, headed by Salt Lake County Councilman Aimee Winder Newton.

Cox said the new office will promote policies that support families and help them get through tough times, saving billions in taxpayers’ money that would otherwise be spent on prison cells and drug treatment, among other things.

Cox’s visit to UTA is part of his nationwide tour, Utah 360, to visit and listen to Utah residents in communities across the state.