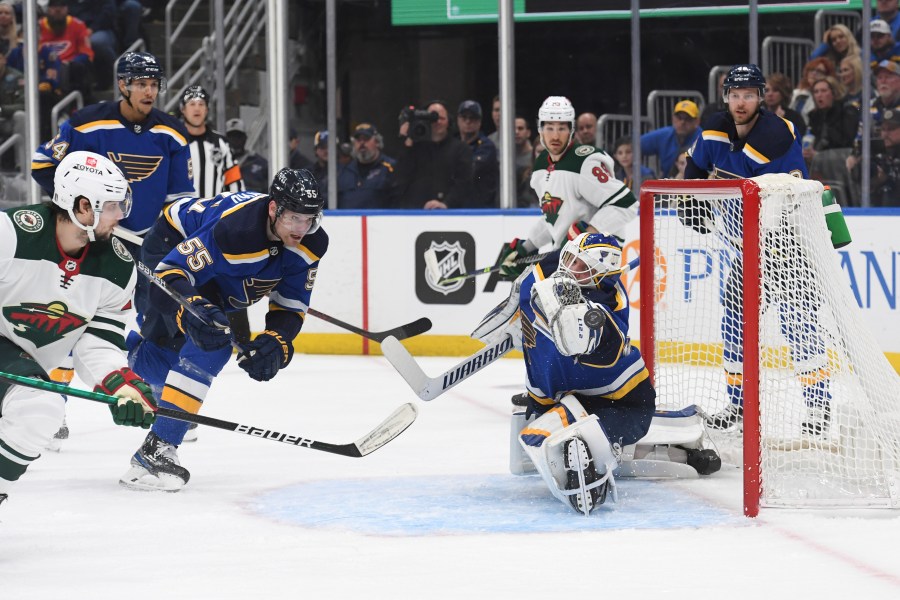 ST. LOUIS (AP) — Kirill Kaprizov had a goal and an assist, Marc-Andre Fleury had 29 stops and the Minnesota Wild beat the St. Louis Blues 5-1 on Friday night to go 2-1 in their Western Conference playoffs to take the lead series.

Joel Erickson Ek had a goal and an assist, and Jordan Greenway, Mats Zuccarello and Jonas Brodin also scored as the Wild improved to 8-8 all-time in Game 3.

Ryan O’Reilly scored a power play goal and Ville Husso made 28 saves for the Blues.

St. Louis lost Torey Krug early in the first half due to a lower body injury. Krug is the third Blues defenseman to be injured on the series.

Game 4 of the best-of-seven series takes place in St. Louis on Sunday afternoon before heading back to St. Paul, Minnesota for Game 5.

The Wild wasted no time in calming the crowd, using the Blues’ aggressiveness to score two early goals.

St. Louis defender Colton Parayko was caught chipping in the offensive zone, leading to a 2-on-1 break that resulted in Greenway’s goal after 39 seconds.

Zucarello’s 16th career playoff goal gave the Wilden a 3-0 lead in the second period, and Erickson Ek scored his third straight goal 22 seconds into the third period. Marcus Foligno collected his second assist of the game for Erickson Ek.

The Blues gained some momentum after O’Reilly’s goal at 2:17 of the third, but Fleury made several hard saves to prevent the rally from gaining more traction.

Brodin’s 7:29 left goal prompted a significant portion of the sold-out crowd to head for the exits.

Blues D Nick Leddy and D Robert Bortuzzo were both scratched after suffering upper body injuries in Game 1 and Game 2 respectively. On Thursday, the Blues recalled D. Steven Santini of Springfield, the team’s AHL affiliate. Santini was a scratch after Marco Scandella, who has missed the last three games with a lower body injury, was given the green light to play.