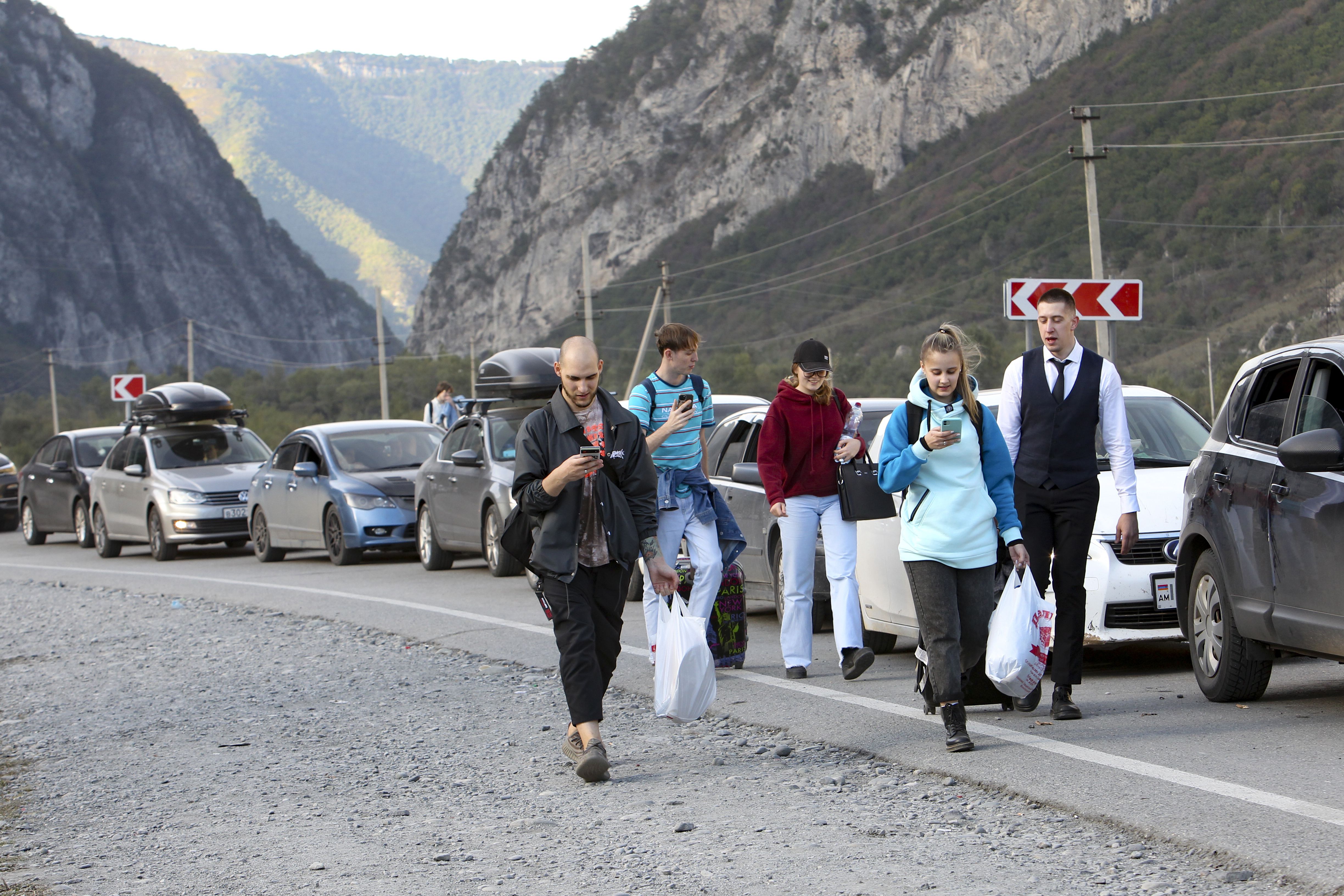 Tallinn – Fewer Russians have entered neighboring countries in recent days, according to local authorities, despite ongoing concerns over the partial mobilization the Kremlin launched less than two weeks ago to bolster its forces fighting in Ukraine.

The mass exodus of Russian men — alone or with their families or friends — began on September 21, shortly after Russian President Vladimir Putin announced the partial call-up of reservists. In Russia, the vast majority of men under the age of 65 are registered as reservists, so international plane tickets sold out in a matter of hours. Shortly thereafter, long lines of cars formed on the roads leading to Russia’s borders.

As of Tuesday, over 194,000 Russians had entered Kazakhstan, Georgia and Finland. How many of them fled the military operation and how many traveled for other reasons could not be ascertained, but the numbers were much higher than before the operation.

According to officials from all three countries, the influx had dropped by the end of the week. It was not clear whether this was related to the temporary military recruitment centers the Russian authorities hastily erected along land borders, or to a policy of turning men away from the borders invoking mobilization laws.

Finland on Friday banned Russians on tourist visas from entering the country, and only 1,688 Russians were able to enter the Nordic country by land that day, compared with 5,262 on Thursday and over 8,000 each day the previous weekend, according to the Finnish Border Patrol.

Fewer Russians also came to Georgia: just 6,109 between Thursday and Friday, compared with 9,642 between Wednesday and Thursday, the country’s interior ministry reported.

The slowdown in the flow of Russians to Georgia, which along with Kazakhstan are two of the most popular land crossing destinations, may also have to do with restrictions. On Wednesday, officials in Russia’s southern region of North Ossetia, home to the only land crossing checkpoint to Georgia, barred cars from other regions from entering in a bid to stem the exodus.

But officials in Kazakhstan also noted a drop, despite no official restrictions being enforced on either side of the border with Russia.

Kazakh Interior Minister Marat Akhmetzhanov on Saturday pointed to a “continued downward trend” in the number of Russians entering the country: just 22,500 entered on Thursday, and even fewer – 14,100 – entered Kazakhstan on Friday. It wasn’t immediately clear what caused the numbers to drop.

The Kremlin has said it will convene around 300,000 people, but Russian media reported the number could be as high as 1.2 million, a claim Russian officials have denied.

The Russian Defense Ministry has promised to conscript only those with combat or service experience, but according to multiple media reports and human rights activists, men who don’t meet the criteria are also being rounded up, including protesters.

The official mobilization decree signed by Putin is terse and vague, fueling fears of a more comprehensive draft.

In an apparent attempt to reassure the population, Putin told Russia’s Security Council on Thursday that some mistakes had been made in mobilization and said Russian men who were mistakenly called up for duty should be sent home.

Other efforts to stem the national panic included promising high wages and benefits for those mobilized.

Russian authorities have also begun turning some men away from the border, citing mobilization laws that bar certain categories of men from leaving the country. They also set up several enlistment offices at border crossings and threatened to serve enlistment papers to those wanting to leave the country.

https://www.local10.com/news/world/2022/10/01/fewer-russians-cross-border-to-flee-despite-military-call-up/ Fewer Russians are crossing the border to flee despite the military call

'Karen' lashes out at rental car clerks for refusing to work