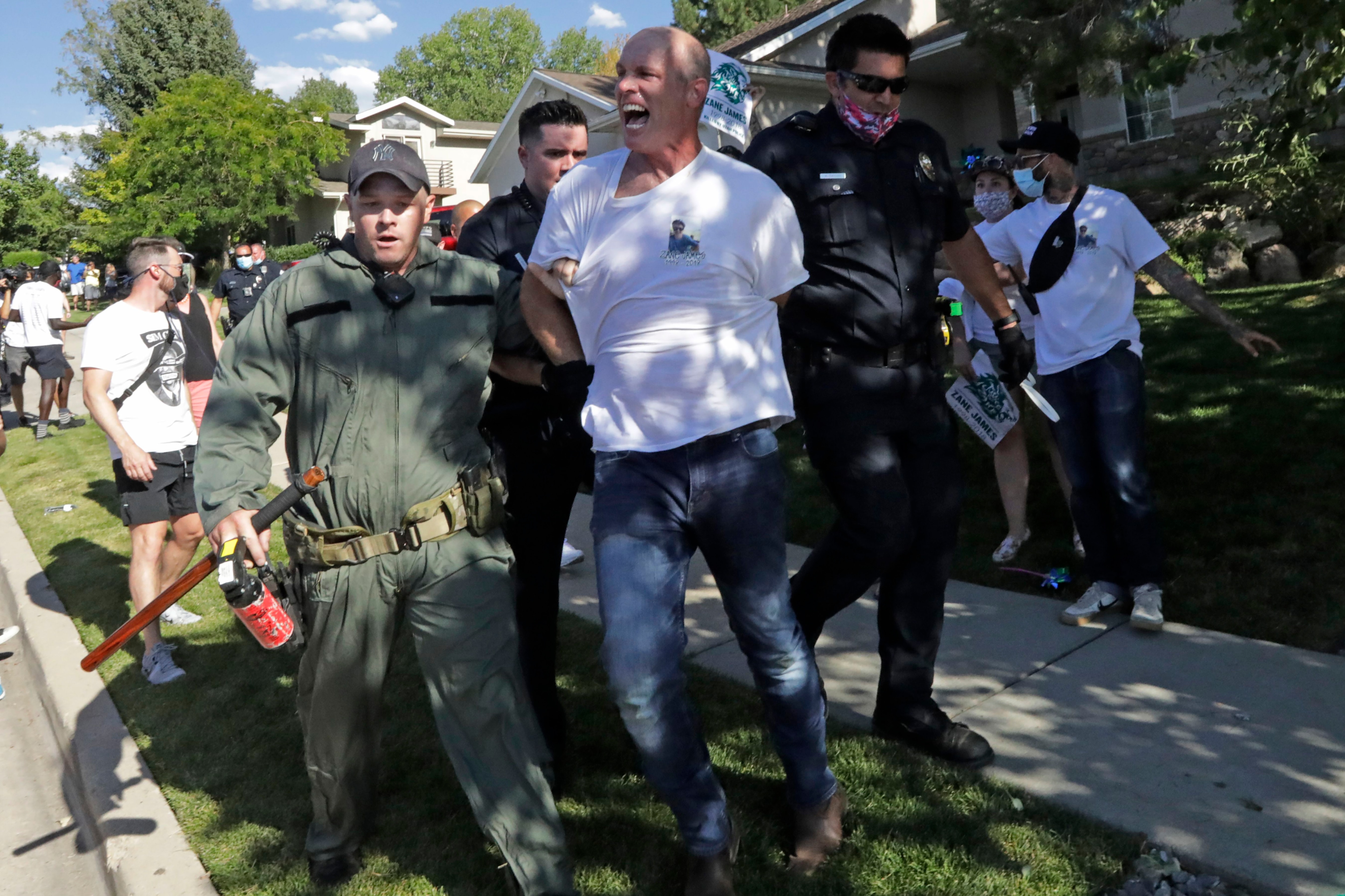 (Rick Bowmer | AP) Aaron James is arrested by Cottonwood Heights Police Department during a march Sunday, August 2, 2020, in Cottonwood Heights, Utah, after police said he tried to assault an officer. A jury acquitted him on Wednesday of attempted assault but found him guilty of two counts.

Aaron James had attended a protest in Cottonwood Heights on August 2, 2020 to commemorate his 19-year-old son Zane, who was shot dead by police in 2018 after allegedly robbing two grocery stores.

The march was intended as a peaceful celebration of Zane. But it ended in a confrontation between police and protesters – and Aaron’s arrest after police said he tried to assault an officer.

A jury acquitted the father of attempted assault on Wednesday. He was found guilty of the misdemeanor of disturbing an arresting officer and walking on or along a road and sentenced to three months’ probation. He was also fined $730.

Nine people were arrested at the Cottonwood Heights police brutality protest on August 2, 2020, when police clashed with protesters. Among those arrested were Aaron James and his son Gabe Pecoraro.

At the time, Cottonwood Heights Police Chief Robby Russo said three of his officers were injured.

Although there were no problems at the start of the march, after about an hour “hundreds” of people joined, took to the streets and began “blocking the streets and not letting people go to and from their homes in the neighborhood ‘ Russo said. and interactions between officials and protesters escalated.

According to a lawsuit filed by Aaron and his wife Tiffany against Cottonwood Heights, officers ordered protesters to move and said they would block roads, but there was no traffic affected by the protest.

Video footage from the protest shows police and protesters yelling at each other after police tried to force the protesters off the street. Police can be seen attacking and pepper spraying protesters during the confrontation.

During the commotion, an officer grabbed Pecoraro’s head and neck from behind, according to the indictment. Unaware that the person “who assaulted him” was an officer, Pecoraro did not “submit” to the officer, according to the lawsuit. He was then stunned with a taser.

The arrest left Pecoraro with a concussion, a broken nose, deep abrasions, damage to his esophagus and post-traumatic stress, according to the lawsuit.

When Aaron James approached officers for an explanation of what happened to his son, police tased him and hit him with a baton, the lawsuit says.

Russo said the actions of the large group of protesters prompted calls for officials to respond. He described the protesters as “rioters” and said some were there to “cause havoc”.

In May 2021, the Utah Attorney General’s office ruled that the Cottonwood Heights police response during the protest was “moderate and appropriate.”

Aaron and Tiffany James’ lawsuit remains in the District Court.

In February, Salt Lake County prosecutors reopened the investigation into the fatal 2018 shooting of Zane James, six months after court documents revealed that the Cottonwood Heights firing officer, who fled on a motorcycle, killed Zane before the shooting caused the accident.

It was the first time District Attorney Sim Gill had formally reopened a police shooting case in his 12-year tenure as Salt Lake County’s chief prosecutor.

In May, Gill concluded the officer had no legal authority to hit the teenager with his police car. But Gill said he would not press charges against the officer because he did not have enough evidence to show Davies “deliberately, knowingly or recklessly” punched James.

https://www.sltrib.com/news/2022/06/10/father-man-killed-by/ Father of man killed by police found not guilty of attempted assault after confrontation at protest in 2020

Even wealthy buyers are feeling the heat, with luxury home sales plummeting nearly 18%

Buddies become rivals in the fight for the west