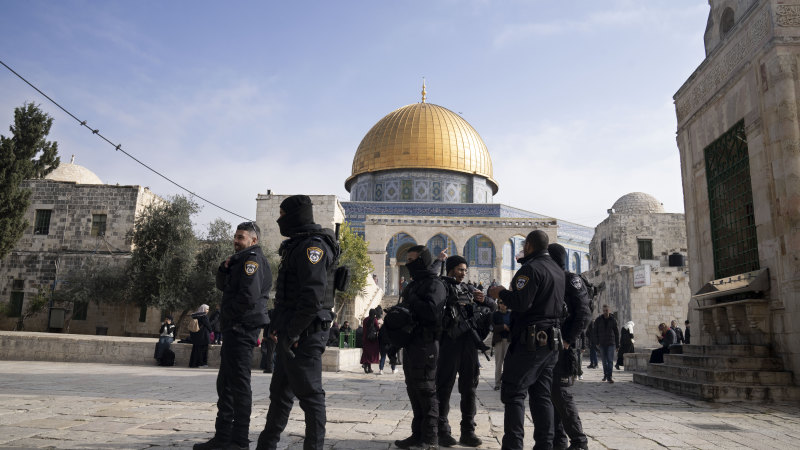 An Israeli official said the 15-minute visit by Ben-Gvir, a senior member of Netanyahu’s new nationalist-religious cabinet, was in accordance with an agreement allowing non-Muslims to visit but not pray.

Ben-Gvir once advocated lifting the ban on Jewish prayers in the sensitive site, but has been non-committal on the issue since he aligned himself with Netanyahu. Other members of Ben-Gvir’s Jewish power party still advocate such a move.

Jordan, the administrator of Al Aqsa and whose 1994 peace deal with Israel is unpopular at home, summoned the Israeli ambassador and said the visit violated international law and “the historical and legal status quo in Jerusalem.”

Palestinian Prime Minister Mohammad Shtayyeh called on Palestinians to resist what he described as raids on the site and accused Ben-Gvir of staging the visit as part of an attempt to move the shrine “to a Jewish temple”. transform.

Israel denies having any such plans. An official in Netanyahu’s office said “claims of a change in the status quo are unfounded”.

A spokesman for Hamas, a Palestinian Islamist group that opposes coexistence with Israel and controls the Gaza Strip, said of the visit: “A continuation of this behavior will bring all parties closer to a major clash.”

The leader of Lebanon’s powerful Hezbollah armed group, Hassan Nasrallah, said any violation of the status quo would lead to an explosion across the region.

The rise of Ben-Gvir in Netanyahu’s government, one of the most right-wing in Israeli history, has deepened Palestinian anger at their long-failed efforts to secure a state on territory Israel seized in the 1967 Middle East War.

Hours before the visit, Israeli forces shot dead a Palestinian teenager in a clash in nearby Bethlehem, medical officials and witnesses said, the latest death in a growing body of victims in the West Bank. Israel’s army said troops fired on Palestinians who threw explosives, stones and firebombs at them.

US Ambassador to Israel Thomas Nides “has been very clear in discussions with the Israeli government on the issue of maintaining the status quo,” the US embassy said in a statement.

Egypt and the United Arab Emirates, both among the few Arab states to have recognized Israel, condemned the visit. Saudi Arabia, with whom Netanyahu wants to forge a peace agreement, also criticized Ben-Gvir’s actions.

Turkey, which recently ended a longstanding diplomatic row with Israel, also condemned the visit as “provocative”.

The Al-Aqsa compound, known to Muslims as the Noble Sanctuary, is the third holiest site in Islam. It is also Judaism’s holiest site, a remnant of two ancient Jewish temples.

Israel regards all of Jerusalem as its indivisible capital – a status that is not recognized internationally. The Palestinians want East Jerusalem, where the compound is located, as the capital of a state that also occupies the West Bank and Gaza Strip.

On Tuesday, devout Jews fasted to ward off a Babylonian siege of the first of these temples in the 6th century BC. to commemorate.

Ben-Gvir oversees the Israeli police, which are formally tasked with enforcing the ban on Jewish prayer at the compound. He said freedom of movement was upheld there without mentioning freedom of religion.

Not far from the site, Israeli police said Tuesday they were investigating the destruction of tombstones at the Protestant Mount Zion Cemetery.

Surveillance camera footage circulating on social media showed two young men, one dressed in Orthodox Jewish robes, entering the cemetery, tearing down a cross-shaped tombstone and smashing it with rocks. Reuters could not immediately verify the footage.