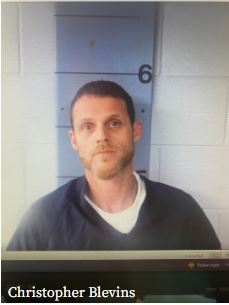 MILLS, WY. – According to KSN in Wichita, one of the inmates who escaped from the Barry County, Mo., jail last Friday was found in Wyoming.

Barry County inmates are said to have been driven to Salina, Kansas, the sheriff says

Christopher Allen Blevins was found in Mills Wyoming and is being held at Natroma County Jail in Casper, Wy.

A woman with blevins was released because Wyoming had no reason to hold her, according to Wallace County, KS Sheriff Marshall Unruh.

Her name has not yet been released, but the Barry County and Wallace County, KS authorities are working to get a warrant out for her, according to Sheriff Unruh.

Salina Police told KSN that this vehicle was stolen between 7:45 p.m. and 8:45 p.m. Saturday night. They say it was found in Greeley County, Kan., and another vehicle was reported missing there.

According to online court records, Stephen was in prison for drug-related offenses, Crawford was charged with theft and Belvins faced various charges including resisting arrest and driving during revocation.