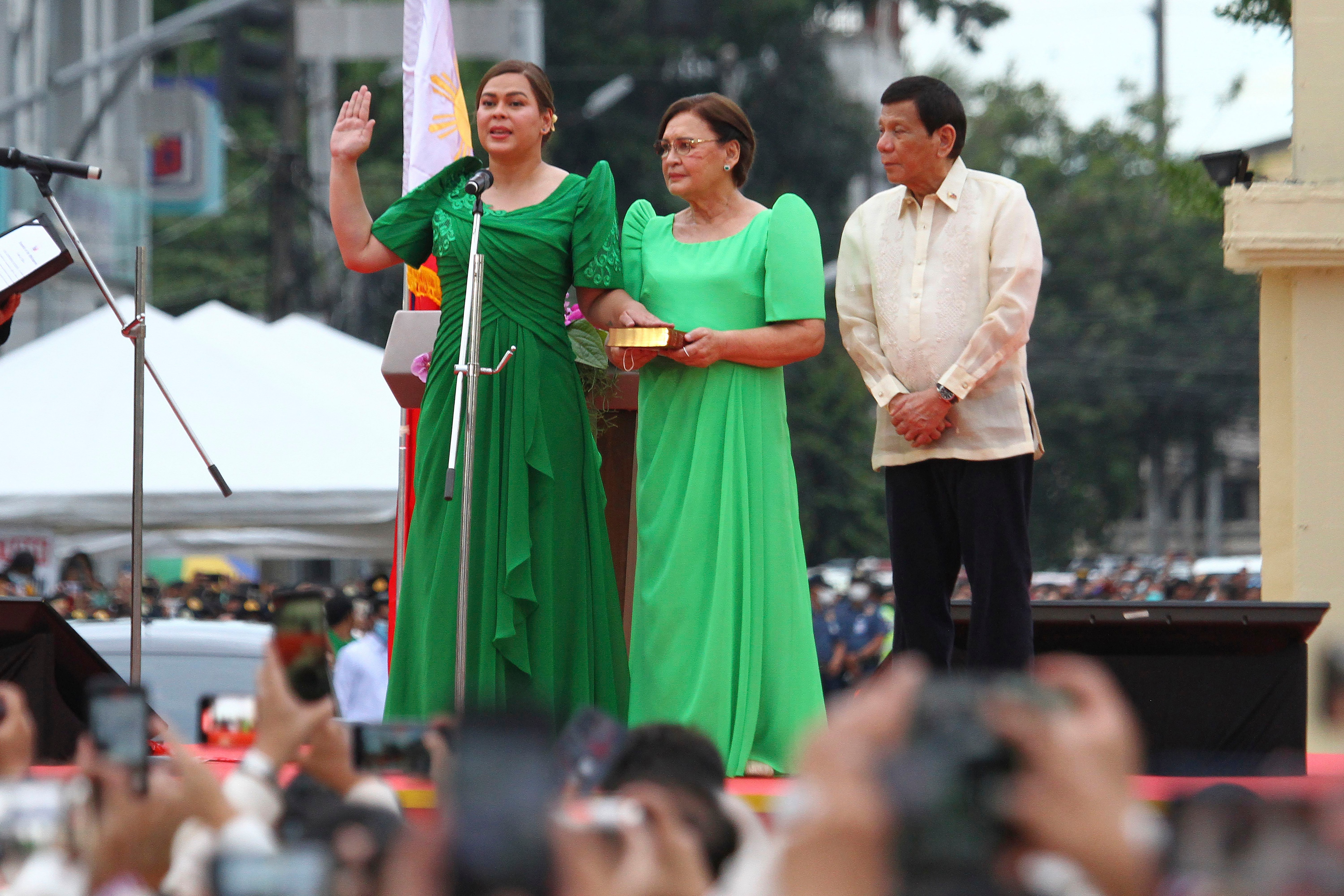 MANILA – Sara Duterte, the daughter of the Philippines’ outgoing populist president, was sworn in as vice president on Sunday after winning a landslide election victory despite her father’s human rights record that has seen thousands of drug suspects gunned down.

The inauguration in her southern hometown of Davao, where she is the outgoing mayor, will take place two weeks before she takes office on June 30, as stipulated in the Philippine constitution. President-elect Ferdinand Marcos Jr.Duterte’s comrade-in-arms will take the oath of office on June 30 in Manila.

“I’m not the best or smartest person in the Philippines and the world, but no one can surpass the toughness of my heart as a Filipino,” Duterte, who wore a green traditional dress, said in a speech after taking her oath in front of a Associate Justice of the Supreme Court, her hand resting on a Bible her mother is holding.

“The voice of 32.2 million Filipinos was loud and clear – with a message to serve our motherland,” Duterte said, referring to the votes she received, to applause from thousands of supporters.

Affectionately dubbed “Inday Sara” by supporters, the mother-of-three called for national unity and devotion to God, and urged Filipinos to emulate the patriotism of the country’s national hero, Jose Rizal. She cited longstanding social ills faced by Filipino children, including poverty, family dysfunction, illegal drugs, bullying and online misinformation, and asked parents to instill in them the values ​​of integrity, discipline, respect for others and compassion.

President Rodrigo Duterte, 77, led VIPs at the heavily guarded ceremony in a public square near City Hall in the port city of Davao, where he has also served as mayor since the late 1980s. His family, from a humble middle-class background, built a formidable political dynasty in the troubled southern region, long plagued by Communist and Muslim uprisings and violent political rivalries.

Duterte’s presidency has been marked by a brutal anti-drug campaign that has resulted in thousands of mostly minor suspects being shot dead by police or vigilantes. The drug killings are being investigated by the International Criminal Court as a possible crime against humanity.

Sara Duterte and Marcos Jr.’s electoral successes have alarmed left-wing and human rights groups for their failure to recognize the massive human rights atrocities that took place under their fathers, including the late dictator Ferdinand Marcos.

Marcos Jr. and Sara Duterte fought on a vague platform of national unity, without clearly addressing activists’ calls for steps to prosecute the elder Duterte if he retires from politics.

One of the president’s sons, Sebastian Duterte, will succeed his sister as mayor of Davao, and another son, Paolo Duterte, won a seat in the House of Representatives in the May 9 election. The outgoing president’s late father was a former governor of Davao.

Philippine elections have long been dominated by politicians belonging to the same bloodlines. At least 250 political families have monopolized power across the country, even though the constitution prohibits such dynasties. Congress – long controlled by members of powerful clans affected by the constitutional ban – failed to pass the legislation needed to define and enforce the provision.

While Sara Duterte, 44, has dismissed calls from her father and supporters to seek the presidency, she has not ruled out a future candidacy. She topped the presidential primary polls last year, winning by a huge margin as did Marcos Jr.

Aside from the vice president, she has agreed to serve as education secretary, although there have been talks that she would initially prefer to head up the Department of Defense, a traditional stepping stone to the presidency.

Still, the education portfolio would provide her first national political platform, particularly with plans to resume physical classes soon after the country was hit hard by two years of outbreaks and lockdowns from the coronavirus pandemic.

Thanking her supporters in Davao on Saturday, she said she decided to hold her inauguration in one of the country’s most developed cities to show her pride as the southern province’s politician who has risen to a top national post.

Duterte completed a medical degree and originally wanted to be a doctor, but later turned to law and was pushed through to enter politics from 2007, when she was elected vice mayor and mayor of Davao three years later.

In 2011, she garnered national attention when she was caught on video beating and assaulting a court sheriff who was helping police demolish a shantytown despite pleading for a brief respite. The court clerk suffered a black eye and facial injuries and was taken to a hospital by her bodyguards.

Despite her public feuds with her father, Sara Duterte shaved her hair a year before the 2016 election to show her support for his candidacy.

He won the only six-year mandate by a wide margin on a bold but failed promise to eradicate illegal drugs and corruption in three to six months and constant public threats to kill drug dealers.

If you can see two faces in this optical illusion, you're in the top 1% - do you see the sad man or the angry man?