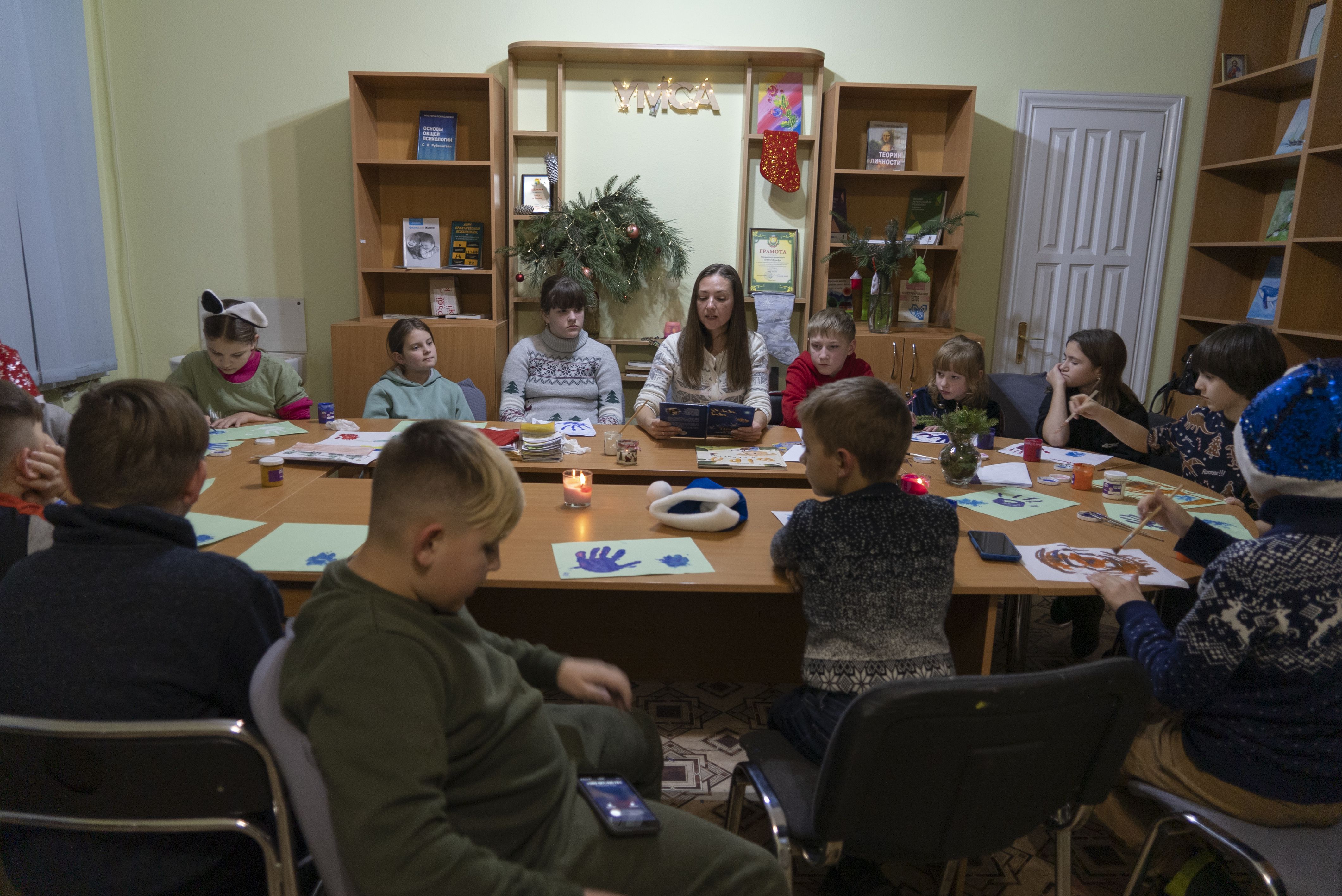 BOYARKA – Bice is an American pit bull terrier with an important and sensitive job in Ukraine – comforting children traumatized by Russia’s war.

The playful 8-year-old gray dog ​​arrived on time at a rehabilitation center on the outskirts of the Ukrainian capital this week, ready to go to work.

As Bice waited in a corridor, in what looked like a school classroom with paintings and some books, a dozen children sat around a table and listened to Oksana Sliepora, a psychologist.

“Who has a dog?” she asked, raising several hands at once as shouts of “Me, me, me!” filled the room.

A youth said his dog’s name was Stitch; “Tank,” said another boy, adding that he had five in all, but had forgotten all their names. Everyone burst out laughing.

At first glance, the seven girls and nine boys – ranging in age from a 2-year-old boy to an 18-year-old girl – look like school children enjoying their lessons. But they have special stories: some witnessed how Russian soldiers broke into their hometowns and beat their relatives. Some are the sons, daughters, brothers or sisters of soldiers who are on the frontlines or have been killed on the frontlines.

They gather at the Center for Social and Psychological Rehabilitation, a state-run community center where people receive help coping with traumatic experiences following the Russian invasion in February. Staff provide regular psychological therapy to anyone affected in any way by the war.

In the past they’ve worked with horses, but now they’re adding support from another four-legged friend: canine therapy.

The center in Boyarka, a suburb about 20 kilometers southwest of Kiev, was set up in 2000 as part of an effort to provide psychological support to people who were directly or indirectly affected by the Chernobyl nuclear power plant explosion in 1986.

Now she focuses on people affected by war. Today, when some areas are without electricity after Russian attacks on Ukraine’s energy infrastructure, the two-storey building is one of the few places with light and heating.

When the children were gathered, some wearing festive blue or red Santa hats, Sliepora mischievously asked if they wanted to meet anyone. Yes they have, came the reply. The door opened. The children’s faces beamed. they smiled.

And then along came Bice, the tail-wagging therapist.

Darina Korozei, the pooch’s owner and handler, asked the children to come one by one and ask him to perform a trick or two. He sat. He stood on his hind legs. He stuck out a paw or turned around. Then a group hug – followed by some yummy treats for him.

For more than 30 minutes, Bice let everyone touch and hug him without ever barking. It was as if nothing else mattered in that moment, like there was nothing to worry about – like a war ravaging their country.

This is the first time Sliepora has worked with a dog as part of her therapies. But she said, “I’ve read a lot of literature about how working with dogs and working with canine rehabilitators helps kids reduce stress, increase stress resistance, and reduce anxiety.”

The kids didn’t seem stressed but of course the reality is still out there.

She observed how some children are afraid of loud noises, such as someone closing a window or hearing the sound of an airplane. Some drop to the ground or ask if there is an air raid shelter nearby.

Among the children were a brother and sister from Kupyansk, a city in the eastern Kharkiv region, who witnessed Russian soldiers burst into their house with machine guns, grabbed their grandfather, put a bag on his head and beat him, Sliepora said .

“Every child is psychologically traumatized in different ways,” she said.

The mothers of some of the children stayed by one of the walls for most of the time, watching and listening from afar. When Bice came, some took pictures of their children.

Lesya Kucherenko was here with her 9-year-old son Maxim. She said she couldn’t stop thinking about the war and what might happen to her eldest son, a 19-year-old paratrooper fighting in the city of Bakhmut in the eastern Donetsk region – one of the most active fronts these days.

Maxim smiled as he played with Bice, but he was always checking on his mother, turning his head every now and then to see her.

Kucherenko said that sometimes she bursts into tears when she thinks of her soldier’s son. Shortly before this session, she received a call from him. He told her he was fine and just remembering that made her cry. In the next second Maxim was there and asked why.

As for the comforting dog, what’s the best message Bice offers to the kids?

Owner Korozei only has to think for a few seconds and replies: “Freedom.”

“Freedom from problems and happiness,” she adds.

https://www.local10.com/news/world/2022/12/12/dog-therapy-for-kids-facing-the-trauma-of-the-war-in-ukraine/ Dog Therapy for Children Confronted with the Trauma of War in Ukraine