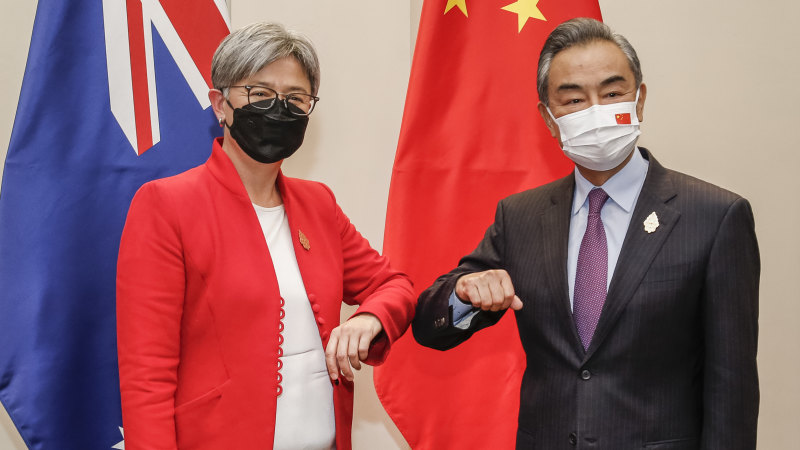 Beyond persistent sources of tension, new and serious obstacles to the relationship threaten.

Alongside Chinese company Landbridge’s re-examination of Darwin Port’s 99-year lease, there is an ongoing possibility that the Australian government will reject a major Chinese investment.

Then there is the potential use of Australia’s Magnitsky-style sanctions against senior Chinese officials implicated in human rights abuses in Xinjiang and elsewhere.

Warmer diplomatic sentiment could therefore prove to be a false spring – any of these developments could reverse or at least halt recent trends.

What can Canberra do to solidify the rebound in ties? So far Prime Minister Anthony Albanese and his ministers have been picking low-hanging fruit.

Gone are the comparisons between the security challenges of today’s China and the threat of Nazi Germany in the 1930s. It was one of the former defense minister’s favorite rhetorical flourishes, unsurprisingly angering the Chinese government.

The Albanian government is also toning down the language it uses to describe China’s trade restrictions. Instead of the rhetorically charged criticism of “economic coercion,” the prime minister and his team have dampened the diplomatic heat by protesting China’s “sanctions.”

These shifts are part of the new government’s effort to seek a “change of tone” and avoid “chest hits,” as Defense Secretary Richard Marles put it. And that shift has probably been noticed and welcomed in Beijing.

After Australia’s general election, China’s so-called “wolf warrior” diplomats are sounding more like puppies. Talk of Australia as the US ‘cat’s paw’ has disappeared, replaced by expressions of hope that ‘bilateral relations [can be handled] in a spirit of mutual respect and mutual benefit.”

But warm words don’t make a committed relationship. To add additional baggage to bilateral relations, the Albanian government should start considering new initiatives that appeal to China without jeopardizing Australian interests and values.

The logical starting point is climate change. As a first step, the Albanian government should propose reviving the Australia-China ministerial dialogue on climate change, which has fallen into disuse in recent years.

Such a dialogue would not only allow Australia and China to explore additional practical ways of working together on a shared existential challenge, but would reinvigorate and institutionalize ministerial engagement between Beijing and Canberra.

The Chinese government is likely to be particularly receptive given Beijing’s prioritization of responding to climate change and the rare alignment of Australian and Chinese interests on the issue.

As the Chinese ambassador to Australia said recently when referring to the “Labour government”. [strong] Focus on addressing the problem of climate change”: “This offers even greater opportunities for cooperation between China and Australia.”

The re-establishment of a formalized ministerial-level dialogue could also be used to directly address a broader range of critical concerns for Canberra, including consular cases, human rights, military developments and other matters.

There is no guarantee that Beijing will accept this initiative. But such a proposal is a low-risk option for Canberra. Unless the Chinese government is receptive, the cost to Australia would be little more than a small portion of diplomatic pie.

Crucially, such an initiative would not involve compromising Australia’s security and economic interests or its commitment to human rights, the rule of law and liberal democratic values.

Wong’s meeting with the Chinese foreign minister, who has been separated from him for a long time, is not a reset. But Canberra can build on that diplomatic rapprochement by proposing new mechanisms to manage one of Australia’s toughest and most critical relationships.