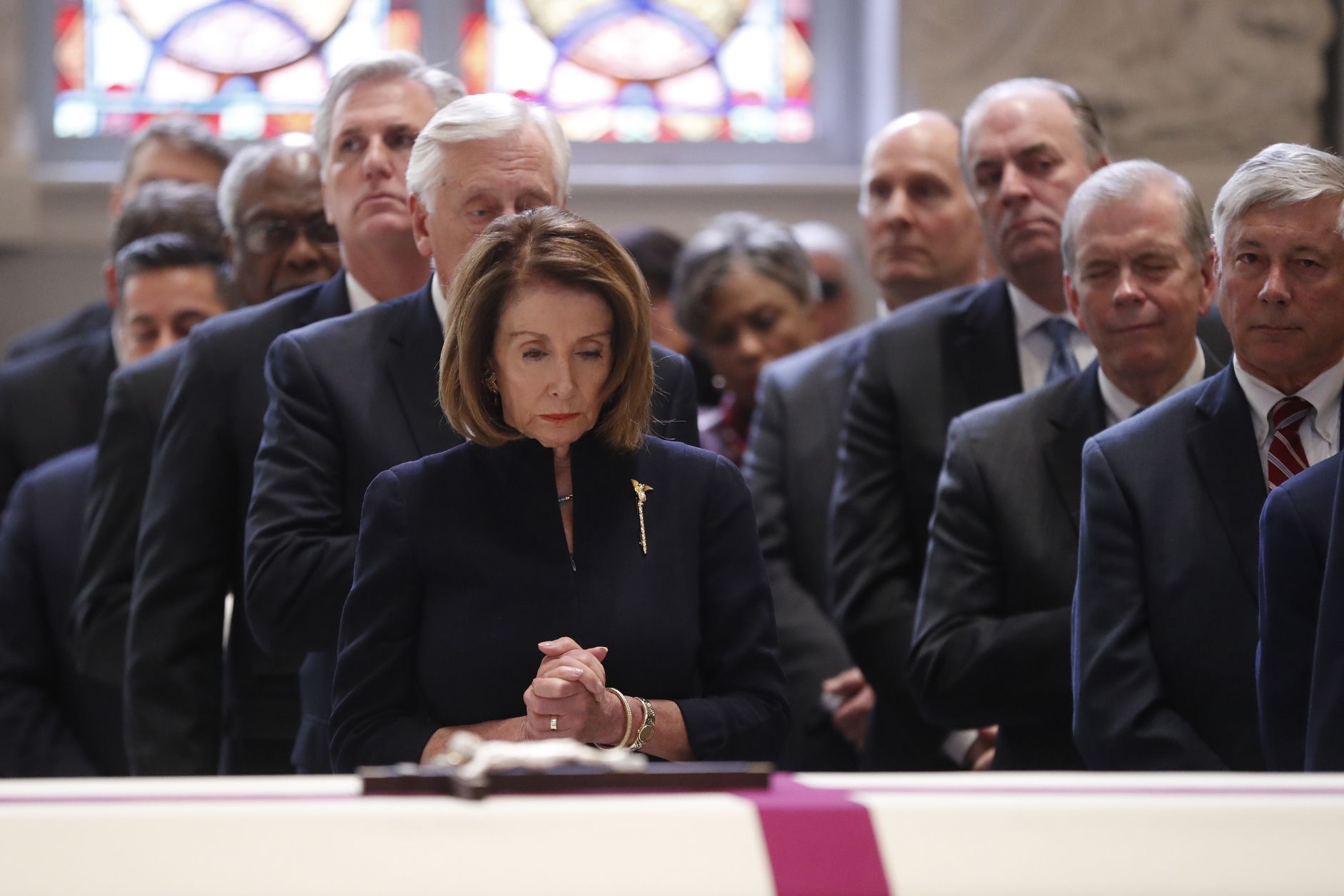 Nancy Pelosi, Abortion and the Sacrament

This raises a question: Could or should a Latter-day Saint bishop do the same if one of his parishioners, perhaps an elected leader, takes a vocal stance on the sensitive issue that runs counter to the teachings of the Church?

Of course, the lay leaders of the faith can forbid members from taking the sacrament (as Latter-day Saints call it) for disciplinary reasons. But to do so to take a public position on abortion would seem too far-fetched.

For starters, Church policy, as detailed in the General Handbook, already provides for “possible exceptions” that would allow abortion.

More importantly, the Declaration of Faith on Political Neutrality recognizes that elected Latter-day Saints can sometimes stand on opposite sides of their religion.

“Elected officials who are Latter-day Saints make their own decisions and may not necessarily agree with one another or even with a publicly stated position of the Church,” the statement said. “While the Church may express its views to them as it does to any other elected officer, it recognizes that such officers must make their own decisions to the best of their knowledge and belief, taking into account the constituencies they have been elected to represent.”

(The Church of Jesus Christ of Latter-day Saints) A young priesthood holder administers the sacrament to a family during a pandemic-altered service in Washington, DC, August 2020.

On other sensitive issues — including same-sex marriage — Apostle D. Todd Christofferson said members have “a variety of differing opinions, beliefs, and positions on these issues.”

A member’s standing in the church “doesn’t really become an issue unless someone attacks the church and its leaders,” he said, “when that’s a deliberate and persistent effort, trying to get others to accept them.” to follow is trying to draw others away and trying to pull people out of the church, if you will, or out of its teachings and doctrines.”

Nonetheless, Wheat & Tares blogger Dave B. warned, “There is nothing to prevent an activist and conservative LDS bishop from taking disciplinary action against an elected LDS official who is a member of the bishops’ congregation on the basis of public statements about abortion limited reach of LDS abortion policy and the church’s earlier tacit hands-off policy.”

A woman who was part of the Mormon MomTok network recently told her millions of followers that she is getting divorced. The reason? She said she and her husband took part in what she called “gentle swinging.”

Though unconfirmed, the video went viral and was widely — and salaciously — reported on social media. Many questions remain about the story, but whether true or not, it sheds light on the Church and its teachings on sexuality in marriage.

On this week’s show, Jennifer Finlayson-Fife, a licensed therapist in Chicago who specializes in working with Latter-day Saint couples on sexuality and relationship issues, discusses these topics and more.

What church leaders should address but are not doing

Top Latter-day Saint leaders face many challenges when it comes to overseeing a global denomination of 16.8 million members. They must balance doctrine (think of the plan of salvation), policies (like the 2015 LGBTQ policy and its 2019 reversal), and practices (like the two-hour Sunday gathering block).

Of course, not all challenges are mastered. Apostle Jeffrey Holland acknowledged this at the last general conference.

“If some are not resolved to everyone’s satisfaction,” he said, “perhaps they are part of the cross that Jesus said we must take upon ourselves to follow.”

But some important issues need to be addressed, argues Ziff, the pseudonym for an author at the Zelophhad’s Daughters website. Here are questions the blogger believes should be a priority for Latter-day Saint leaders:

• How Church Singles Could Be More Welcome. Two apostles mentioned at the April 2021 conference that they make up the majority of members, “but is there any doctrinal innovation or even a church program or even a rhetorical change to try to help single people feel more welcome?” asks Paragraph “Not that I saw it.”

• How the church could be more welcoming to LGBTQ people. “[General authorities] spend a lot of energy talking about the threat posed by LGBT people without realizing that these people are actually part of the church,” the blogger writes. “…Hell, they don’t even seem to be aware of the existence of anyone except maybe gay men.”

• How women could have a voice in church leadership. Executives undertook “to tinker around with the edges. … They also changed some rhetoric to tell women that everything they do in the church is under the authority of the priesthood, so it’s kind of alongside the priesthood and therefore very important,” says Ziff. “…The supreme Leadership…remains purely male. … And we still have the conflicting lines in the [family proclamation] about husbands presiding, but husbands and wives are ‘equal partners’.”

• How to enlighten the value of woman in the afterlife. Apostle Dale Renlund confirmed the official essay of faith that confirmed the existence of the Heavenly Mother, but then cautioned against speculating about her. “Saying something specific about Heavenly Mother,” the blogger suggests, “would be an easy way forward for [general authorities] to make it clear that women will not be subject to men forever.”

Ziff wonders if these “pressing” concerns would be more easily addressed if the faith’s leaders were more diverse.

“It needs to include women and people with different life experiences (please stop being executives for a while),” says the author, “and more racial diversity and more age diversity (maybe 72 would be a good retirement age) and people from different economic backgrounds.”

(Michael Stack | Special to The Tribune) The first chapel built by The Church of Jesus Christ of Latter-day Saints in the Middle East, in Abu Dhabi, United Arab Emirates, April 7, 2022.

• We visited the United Arab Emirates, where the Church is building its first meetinghouse in the Middle East and where its first temple will soon be built in the Muslim-dominated region.

• On last week’s Mormon Land podcast, a Latter-day Saint scholar posed an intriguing question. if President Russell M. Nelson stood at general conference and instructed the members to put down their arms. What would happen? Would some members accept and heed the message? Would others ignore and hate it?

Read the story. listen to podcast

• Gunfire erupted at or near the Hill Cumorah Visitor Center on Wednesday. Nobody was hurt.