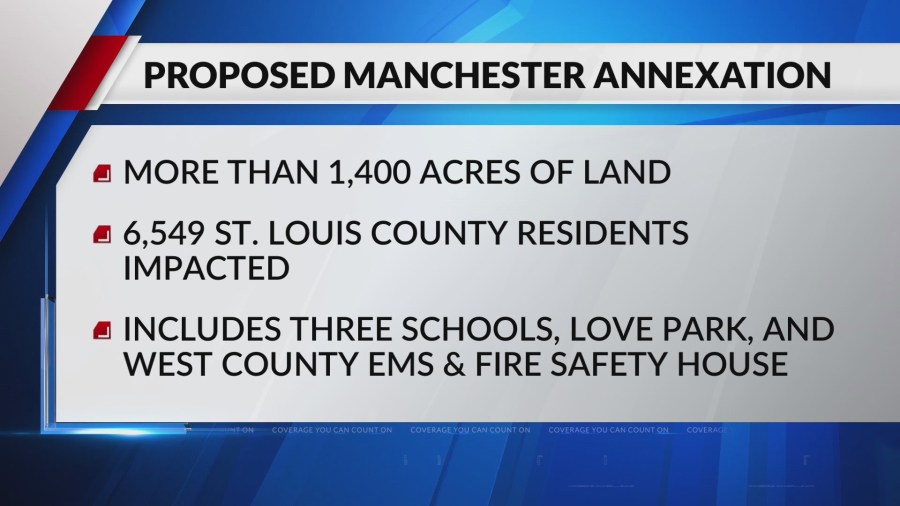 County Executive Sam Page will address the issue later Wednesday morning at a news conference at the Main County Building. Page spokesman Doug Moore said Page would oppose the plan. The City of Manchester intends to annex more than 1,400 acres of land.

Moore stated that more than 6,500 St. Louis residents would be affected. Details of the plan, detailed on the City of Manchester’s website, said the annexation would include three schools, Love Park and a West County Rescue and Fire Protection House.

There is a map of the planned annexation area. The area in brown is the existing Manchester city limits, while the area in gray is what Manchester wants to annex. It is an area east of Glyn Cagny Road near Highway 141, north of Carman Road, west of Barrett Station Road and south of Queeny Park. If the plan goes through, Manchester would expand into Border Town and Country and Des Peres.

The Manchester website said the move is a natural and logical next step in strengthening the community and infrastructure shared by people in the area. But Page is expected to say on Wednesday morning that annexing the land would mean more costs for residents, with no guarantees the new services they would receive would be as good as those they have now.

Voters in that area would have the final say on the plan. That could happen in April next year. Page’s press conference is scheduled for 8:30 am

Jan. 6 rioter apologizes to officials after testimony from House of Representatives