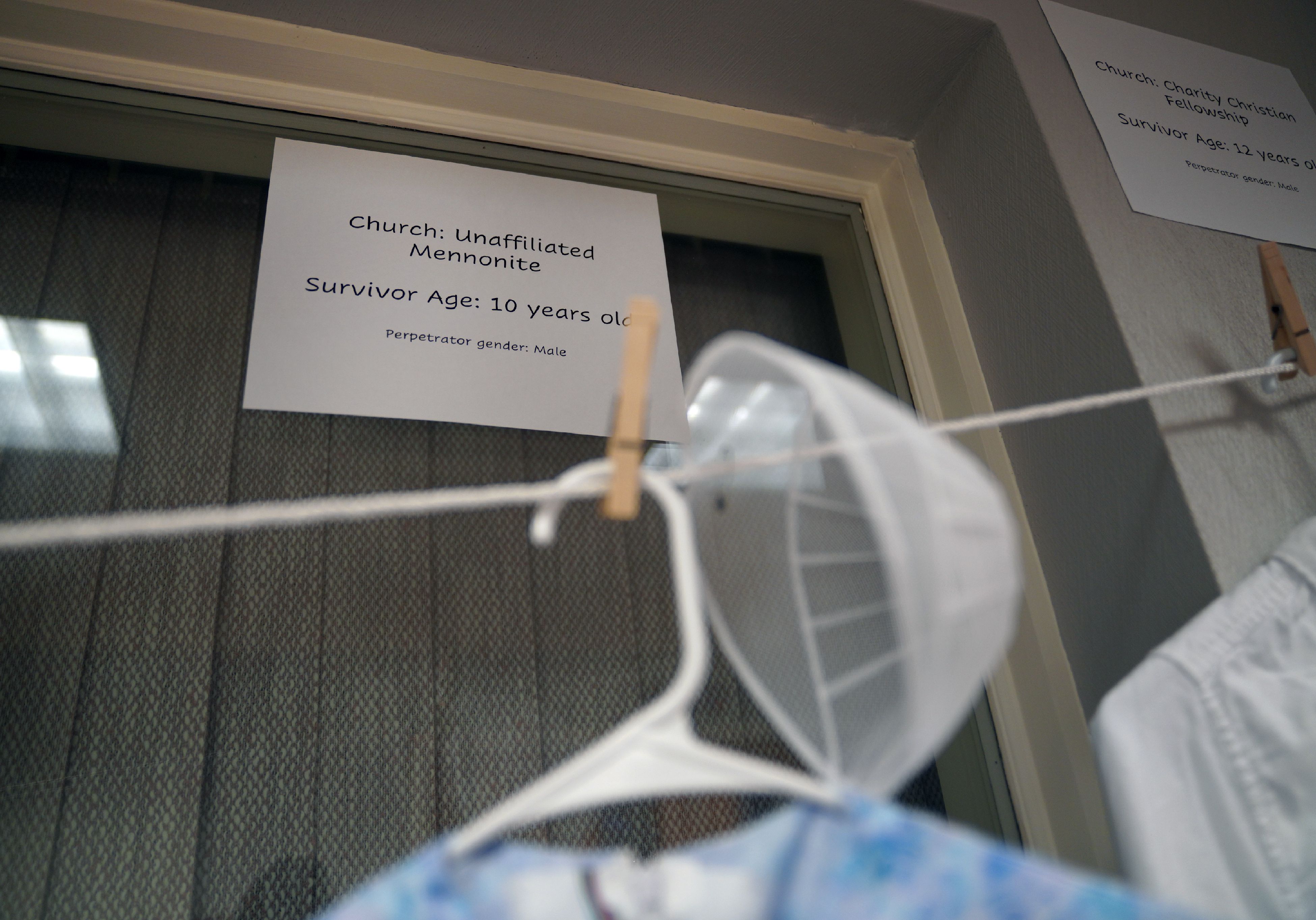 LEOLA, Pa. – Clotheslines with billowing linens and long dresses are a common sight on the off-grid farms of Lancaster County, Pennsylvania, home to the nation’s largest Amish settlement. For many tourists, they’re just as iconic a part of the bucolic Amish Country landscape as the country lanes and wooden bridges.

But for two days at the end of April, a clothesline with a different purpose was stretched here in a small indoor exhibition. Hanging from it were 13 outfits depicting the trauma of sexual assault suffered by members of the Amish, Mennonite and similar groups, a reminder that the modest clothing they need, especially of women and girls, is not protection.

Each garment on display was either the original worn by a survivor at the time of the attack, or a replica assembled by volunteers to meet the strict dress codes of the survivor’s childhood church.

One was a long-sleeved, periwinkle-blue Amish dress with a simple high collar. The accompanying sign read: “Age of survivor: 4 years”.

Next to it was a 5-year-old’s heavy coat, hat, and long, hunter-green dress, flared over sturdy black shoes. “I was never safe and I was a kid. He was grown up,” a sign quoted the survivor as saying. “No one helped me when I told them he hurt me.”

There was also a romper for toddlers.

“You get angry when you get a tiny outfit in the mail,” said Ruth Ann Brubaker of Wayne County, Ohio, who helped set up the exhibit. “I didn’t know I could be that angry. Then you start to cry.”

The garments on display represented various branches of the conservative Anabaptist tradition, including Amish, Mennonite, Brethren, and Charity. Often referred to as Plain Churches, they emphasize separation from mainstream society, church discipline, forgiveness, and modest dress, including headgear for women.

It was part of a larger conference on sexual abuse awareness in the Plains churches held April 29-30 at Forest Hills Mennonite Church in Leola and sponsored by two advocacy organizations: Zanesville-based A Better Way, Ohio, and Safe Communities Lancaster, Pennsylvania.

Hope Anne Dueck, executive director of A Better Way and one of the organizers of the exhibition, said many survivors report being told things like, “If you had been wearing your hat, you probably wouldn’t have been attacked” or “You could not being decently dressed.”

“And as a survivor,” Dueck said, “I knew that wasn’t the truth.”

“You can get hurt no matter what you wear,” she said. Those who contributed to the exhibit “wore what their parents and the church dictated, and wore correctly, and were still attacked.”

The exhibit was based on similar exhibits held on college campuses and elsewhere in recent years called What Were You Wearing. They display a wide range of clothing with the aim of dispelling the myth that sexual assault can be traced back to a victim’s clothing.

Current and former members of plainclothes religious denominations — not just Anabaptists, but others like Holiness, an offshoot of Methodism with an emphasis on piety — agreed last year that it was time to host their own version.

“At the end of the day, it was never about the clothes,” said Mary Byler, a survivor of child sexual abuse in the Amish communities in which she grew up. Byler, who founded the Colorado-based group The Misfit Amish to bridge cultural differences between the Amish and wider society, helped organize the exhibit.

“I hope it helps the survivors to know they are not alone,” she said.

Survivors were asked to submit their outfits or descriptions of them. All but one provided children’s clothing, mainly girls and one boy, which reflected their ages when attacked. The lone adult outfit belonged to a woman who was raped by her husband shortly after giving birth, Dueck said.

The organizers plan to create high quality photos of the garments to be displayed online and in future exhibitions.

Ordinary church leaders have recognized in recent years that sexual abuse is a problem in their communities and have held seminars to raise awareness.

But proponents say they need to do more, and that some leaders continue to treat abuse cases as a matter of church discipline rather than a crime to be reported to civil authorities.

Researchers and conference organizers said they are surveying current and former members of the Plain community to gather concrete data on what they believe to be a pervasive problem.

But the exhibit alone made a powerful statement, said Darlene Shirk, a Mennonite from Lancaster County.

“We’re talking stats … but when you have something physical here and the dress is from the plain community, it screams, ‘Look, this is happening in our community!'” she said.

Proponents say that in male-led Plains Churches, where forgiveness is taught as the highest virtue, people are often pressured to reconcile with their abusers or their children’s abusers.

Byler said that in the 18 years since she reported her sexual assaults to civil authorities, she has heard more stories of abuse in the Plains churches than she can count. Survivors are often isolated from their communities and confronted with “very sacrificial statements,” she said.

https://www.local10.com/news/national/2022/05/06/what-they-wore-clothes-spotlight-sex-abuse-in-amish-others/ Clothing sheds light on sexual abuse among Amish and others

Want to catch a $29 flight to Las Vegas? This Utah-based airline just announced a new service.