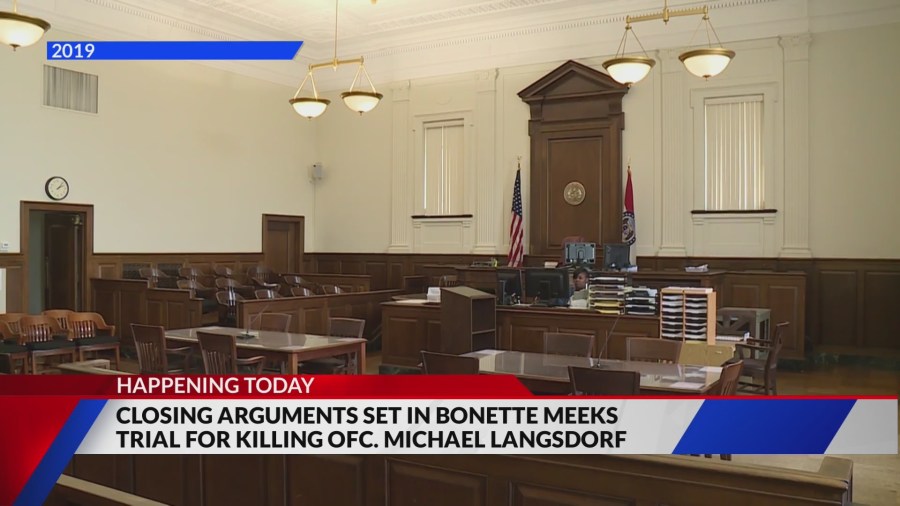 ST. LOUIS – The trial is taking place at the St. Louis County Courthouse.

Testimony began on Tuesday. The closing arguments were originally scheduled to begin on Thursday but have been postponed. Now they are scheduled for Friday morning at 9am.

North County Co-op Officer Michael Langsdorf was 40 years old when he was shot on duty in June 2019. Langsdorf was responding to a complaint about bad checks at a Wellston grocery store when he lost his life.

Investigators said Bonette Meeks, 29, shot Langsdorf in the head during a fight at the market. Meeks was charged with first-degree murder, armed criminal activity, unlawful possession of a firearm and resisting arrest.


During the trial, prosecutors told the jury that Meeks attempted to cash two suspicious checks valued at more than $6,000. Langsdorf attempted to handcuff Meek, resulting in a scuffle and a shootout. Meeks’ attorney argued that Langsdorf did not identify himself as a police officer and that only his hat identified him as a police officer. The officer who pursued and arrested Meeks said he saw him running east from the market onto Page, gun in hand.

There’s no word on how long the closing arguments are expected to last or when the jury will officially receive the case.

https://fox2now.com/news/missouri/closing-arguments-set-for-man-who-killed-officer/ Closing arguments on the alleged murder of Officer Langsdorf

Daily Dot Newsletter: Have you been ripped?