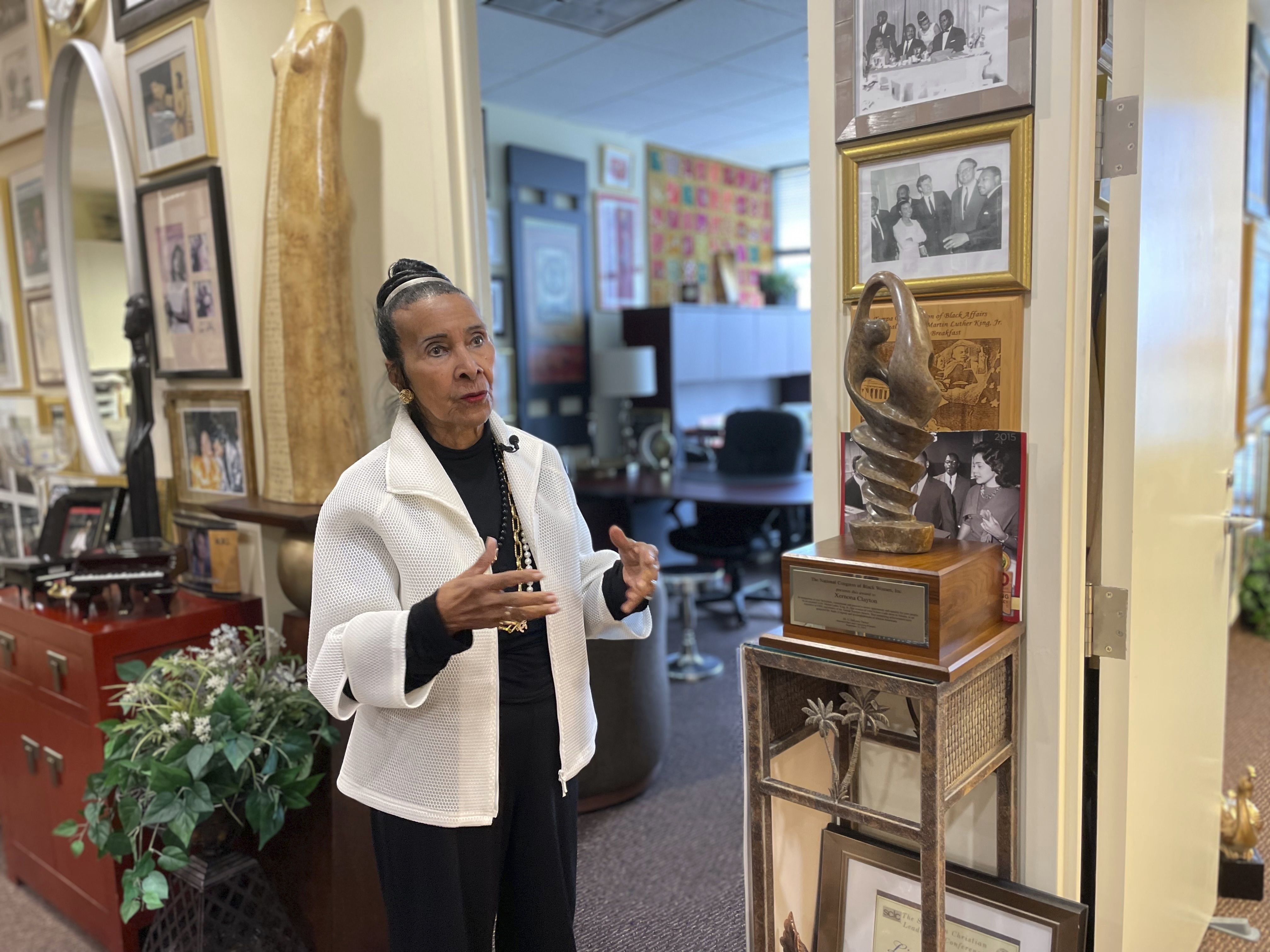 ATLANTA – A key associate of the Rev. Martin Luther King Jr. who helped sustain the civil rights movement in the 1960s says she is deeply saddened by the hate crimes aimed at terrorizing people across America.

But Xernona Clayton has worked for racial harmony since the beginning of the movement and refuses to accept mass killings as routine.

“We have too much racial conflict,” Clayton, 91, told The Associated Press during an interview at her Atlanta office. “It’s so idiotic that we had this racism in the first place. Because none of us had a say in how we got here.”

“My mind always goes back to what Martin Luther King would have said,” she said. “He always said, ‘You know, we CAN love each other.’ He said, ‘There’s just no reason why we can’t.’ And it was difficult for him to understand why we don’t.”

But the two women bonded when Clayton organized Ms. King’s national singing tour. She was soon making sure bloody protesters were taken care of, calling her friends Sidney (Poitier), Harry (Belafonte) and Bill (Cosby) for bail.

In 1966, Clayton learned that black doctors in Atlanta were limited to one facility, Grady Hospital, and only one day a week. “Wednesday was the day black people had their babies,” she recalled. “So I organized the doctors and told them, ‘We can do something about it.'”

She found a government ally to share how much federal money was pouring into Atlanta’s separate hospitals and took the doctors to Washington to score a White House visit. President Lyndon Baines Johnson had tacitly encouraged such grassroots lobbying and surprised them by insisting that hospitals across the country must desegregate before receiving Medicare funds.

“I’m mostly fearless. You know, I’m not afraid to tackle an issue,” Clayton said. “I will fight for what is right.”

At a time when national news organizations — including the AP — were using all-white staff to report on civil rights, her friend Ralph McGill, editor of the Atlanta Constitution, had her speak at a television industry convention. She took her to task for her attitude. Atlanta’s CBS affiliate WAGA responded in 1967 by making her the South’s first black female talk show host.

While King’s assassination shook the nation just months later, Clayton and her guests provided audiences with a model for racial harmony. She even persuaded a Ku Klux Klan Grand Dragon to renounce the white terrorist organization. They too became friends.

Barbara Walters recruited her for a network role, but Ted Turner instead hired her to set an inclusive tone at the Turner Broadcasting Service, which launched CNN. She was Turner’s corporate vice president for urban affairs for many years.

Clayton also founded the Trumpet Foundation to celebrate African-American achievers, and still works there amid memories of a life of activism when not working with her second husband, Paul L. Brady, the nation’s first black federal magistrate is. Her first husband died in 1966.

Clayton started out as an “undercover agent” for the Chicago Urban League in the early 1950s, arranging job interviews that were only turned down when they saw the color of her skin. Faced with evidence of racism, Marshall Fields hired his first black market employees.

“There’s something about winning – winning is fun,” she recalled. “He gave me the certainty that I could change something.”

She was born on August 30, 1930 to her twin sister, Xenobia, and grew up in segregated Muskogee, Oklahoma. Her father was a minister and agent for Native American affairs, so respected that the white chief of police and the mayor often asked for advice on Black and Native American communities.

“He was a quiet man, but quietly he could change a person’s life. And he did it to the authorities: the police, the mayor, whatever. I often wonder if maybe I had some of that in my blood.”

She felt the sting of racism at what later became Tennessee State University, where she and her friends went out for hamburgers one night in 1950.

“This guy was standing at the counter, he had a butcher knife, probably 3 feet long. I had never seen a knife that big. But he said to us as we walked in the door, ‘If you n(star)(star)(star)(star)(star)(star) don’t get out of here, I’ll cut your heads off! You know you don’t belong here!’ Scared us to death,” she recalled.

“There was a sign outside that said ‘hamburgers for sale’ and ‘you don’t belong here?'” she said. “I still feel the pain, the embarrassment, the ridicule. I still feel it.”

Clayton earned a master’s degree in education from the University of Chicago, where her marriage to the editor of Jet placed her at the center of black culture and politics. She was by Edward Clayton’s side when he heard that the mother of Emmett Till, who was lynched in Mississippi, wanted the world to see his brutal body. He stopped the printers from putting the image on the cover, shocking the nation’s conscience and stirring widespread support for civil rights.

The couple then moved to Los Angeles, where Clayton said she did something “monumental.” As she volunteered with 100 early school leavers, she found that some just needed new clothes or curlers to get back to class. Others committed crimes, so she talked herself into gang meetings and urged them to study for a corporate career instead.

“And guess what? To this day, my pride and chest are big. Because I took 100 kids and got 82 of them back to school.”

It became her motto: “One person can make a difference. So don’t run away when you see a problem. See if there’s a way you can help,” she said. “I tell people all the time these days, look around — there’s something you can do.”