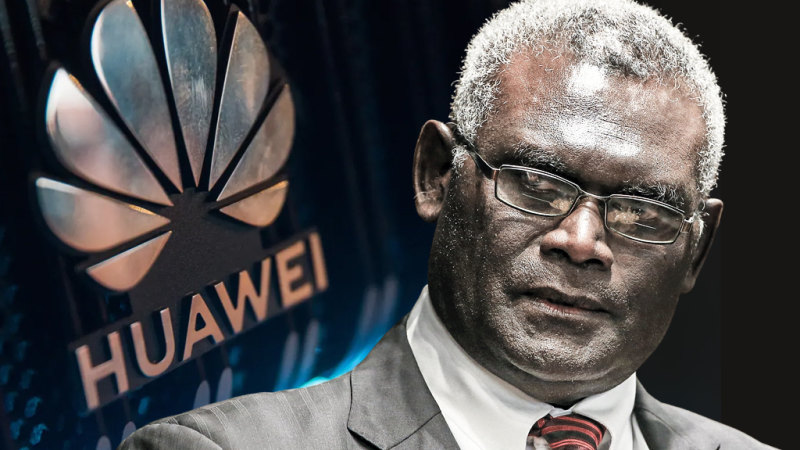 “Expect more surprises in the future,” Sora said. “[The security deal] is certainly not the end of China’s efforts.”

The Australian Foreign Office said international investment is a matter for the Solomon Islands government.

The Sogavare government said the RMB448.9 million (US$97 million) Huawei deal would be funded by a loan from the Exim Bank of China and “the project would generate sufficient revenue for the government to support both the principal loan amount as well as the interest cost within the loan period”.

But a KPMG report provided to ABC reportedly found the project would cause a financial loss of nearly $144 million. The Kiel institute found that since 2008 there have been 71 debt restructurings involving Chinese creditors from 39 developing countries, giving Beijing financial and diplomatic clout over local governments.

Sora said mobile telecom infrastructure is critical in the Pacific, which suffers from poor connectivity over long distances.

“Sogavare can package this to demonstrate that the switch in diplomatic relations is beneficial for the Solomon Islands,” he said.

“It also fits well with China’s increasing presence in the broadcast and media production space in the Pacific.”

China is in the midst of digitizing East Timor’s television network and is expanding its media education work across the region. Australia has slashed its Pacific programming by $35 million under the former coalition government as part of a funding cut for international broadcasting.

“[The Huawei deal] seems to be about infrastructure development, but maybe there could be a content element later that takes advantage of the fact that Australia has withdrawn from that media space,” Sora said.

“This is important for China because it suffers from community sentiment. You have to build the infrastructure, and then you start delivering the messages you want people to hear.”

battle in the west? Parramatta and Penrith are like different countries

Harry and Meghan ‘concerned’ about being ‘loosened from royal picture’