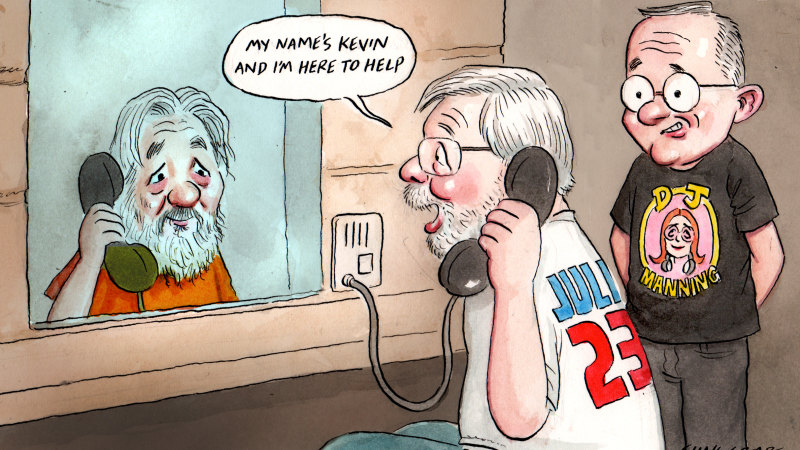 The main reason for the growing optimism is that Australia has a prime minister who is actively working to secure Assange’s release, even if it means spending diplomatic capital with our key ally. The Morrison government took a no-nonsense approach, arguing that Assange’s case should be allowed to take place in the UK and US legal systems.

Albanese, on the other hand, said he believed Assange’s case had dragged on too long and needed to be brought to an end. In his first months as prime minister, he remained silent on the issue and vowed not to engage in “megaphone diplomacy”. That changed in November, when he gave a strikingly candid response to a question from independent MP Monique Ryan.

“I have personally raised this with officials from the United States government,” Albanese told Parliament. “My position is clear and has been made clear to the US government. I will continue to advocate for this, as I have recently done in meetings I have held.”

Albanese essentially confirmed that he had raised the issue directly with Biden, as the two had met for 45 minutes in Phnom Penh just a fortnight earlier.

Then, just before Christmas, came Albanese’s decision to appoint former Prime Minister Kevin Rudd as Australia’s ambassador to the US. As far back as 2010, when WikiLeaks published the war cables, Rudd repeatedly insisted that the US government and Manning, rather than Assange, should be held responsible for leaking classified material.

When Priti Patel, then UK Home Secretary, certified Assange’s extradition to the US in June, Rudd tweeted: “I do not agree with this decision. I do not support Assange’s actions and his reckless disregard for classified security information. But if Assange is guilty then so are the dozens of newspaper editors who willingly published his material.”

Assange’s supporters are also seeing promising signs in the American media, where his case has received surprisingly little attention despite its high-profile and controversial past. In a joint open letter published at the end of November The New York Times and four European news outlets called on the US government to drop the charges because prosecutors are setting “a dangerous precedent” that threatens to undermine freedom of the press.

“The acquisition and disclosure of sensitive information when necessary in the public interest is a core part of the daily work of journalists,” the letter reads. “If this work is criminalized, our public discourse and democracies will be significantly weakened.”

Since WikiLeaks was founded, Assange has done some questionable — even despicable — things. Robert Mueller’s report on the 2016 US election found that Assange had fueled dangerous conspiracy theories by falsely claiming that assassinated Democratic Party staffer Seth Rich, rather than Russian hackers, leaked damaging information about Hillary Clinton’s campaign to WikiLeaks. Brad Bauman, a former Rich family spokesman, said at the time the report showed Assange was a “monster, not a journalist.”

But one need not regard Assange as a noble figure – or even as a journalist – to support his release after so many years in captivity.

“It’s very easy for people to understand the hypocrisy behind it,” says Shipton. “Why is the Australian publisher in jail while the US whistleblower is free? It fails the pub test.”

There is no indication that Biden or his attorney general, Merrick Garland, are interested in seeing Assange punished. The charges against him are a holdover from the Trump administration. The Obama-era Justice Department declined to prosecute Assange because it could set a precedent by jailing journalists for doing their job.

Still, the notion that asking Biden to halt extradition would require no more than a simple phone call needs to be tempered with reality.

“It’s not a simple stroke of the pen,” says a senior government source, speaking on condition of anonymity. “The idea that Biden can just wave a wand here is nonsense. It’s hard and complicated.”

One of Trump’s litany of sins during his tenure was attempting to transform the Justice Department into his de facto personal law firm. Biden has said one of his priorities as president is to restore “the reputation and integrity” of the Justice Department, which he says has been “corrupted” by Trump.

Biden had to backtrack quickly in October after saying he wanted people prosecuted for defying subpoenas from the House of Representatives investigating the Jan. 6 Capitol riots. “I have, have not and will not pick up the phone and call the attorney general and tell him what to do or not to do regarding the indictment,” Biden said.

Ordering Garland to drop the charges against Assange would be a clear breach of that vow. A more realistic hope is that Garland will quietly revisit the case and decide that he is claiming resources that could be better spent elsewhere.

Importantly, by the time Obama granted Manning clemency, the court case was well underway; With Assange, it’s a different story altogether. Those within the US security apparatus – who claim that Assange’s conduct, including the alleged conspiracy with hackers, went beyond normal journalistic practice – want him to be held accountable. And many Democrats still regard Assange with contempt for his role in putting Donald Trump in power by releasing Hillary Clinton’s emails during the 2016 campaign.

The argument to drop the charges against Assange has always been valid on press freedom grounds. It only gets more convincing with time. He’s suffered long enough in prison.

Albanese should be commended for campaigning for his release. Achieving this goal, however, requires sensitivity and patience. If Assange is a free man by the end of the year, let alone the next two months, it will be a foreign policy triumph.