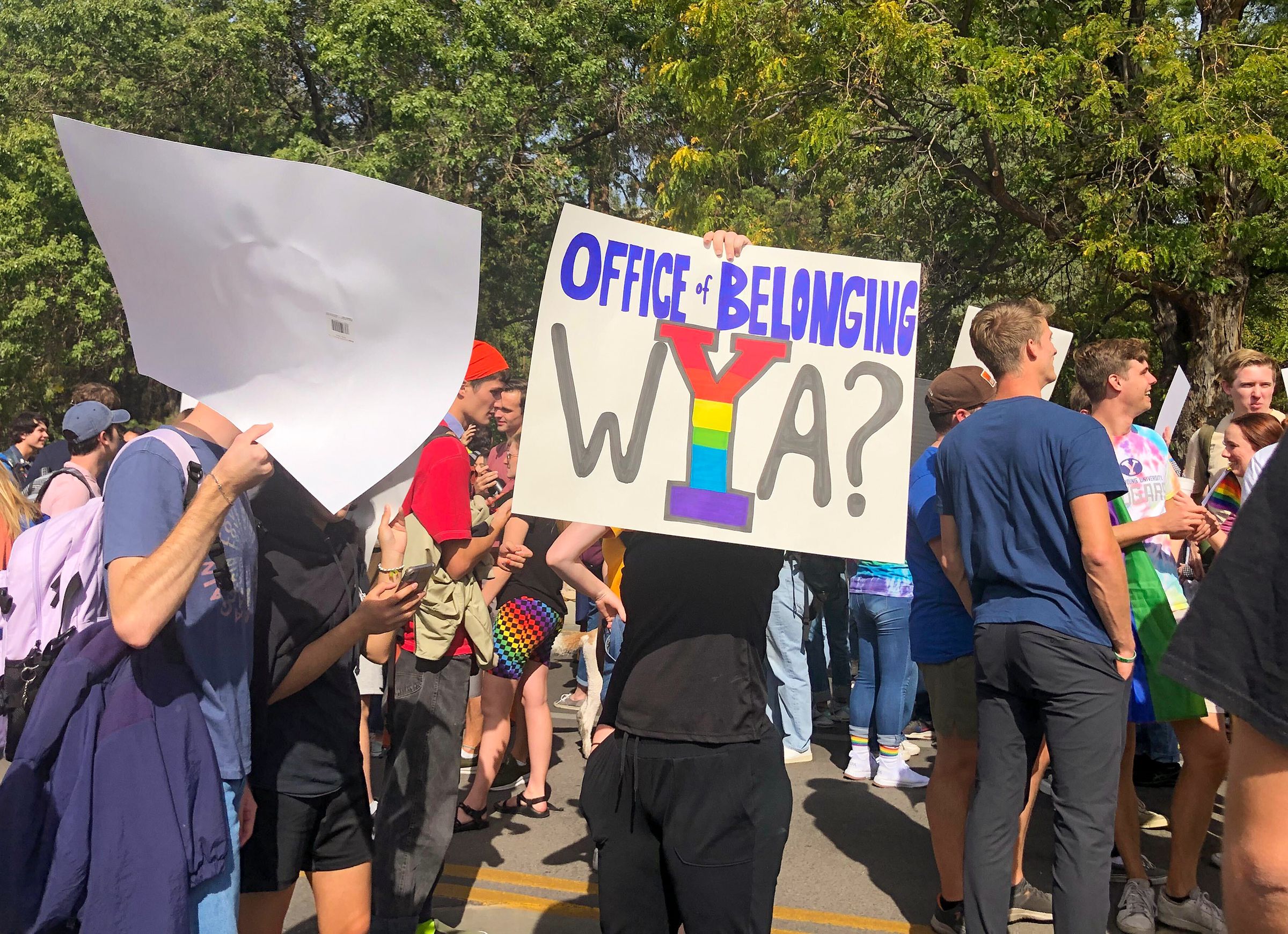 Dozens of students and a few allies staged a strike at Brigham Young University on Tuesday, joining a national protest against restrictive LGBTQ policies at religious-affiliated colleges.

“We hope it will be really big for us to change religious exceptions at Title IX-exempt universities,” said Ryn Butler, vice president of Understanding Sexuality, Gender and Allyship (USGA), the longest-standing queer group at the BYU. “It’s such a big deal that queer people don’t have the same rights as straight people.”

The “Strike Out Queerphobia” national protest aimed to shine a spotlight on Title IX, the federal antidiscrimination laws that govern college campuses — and the exceptions to Title IX, the religiously affiliated colleges and universities like BYU, which in the Possession is to be granted by The Church of Jesus Christ of Latter-day Saints.

Tuesday’s protest, which was expected to involve around 100 colleges and universities across the country, was timed to coincide with National Coming Out Day, a celebration of allowing LGBTQ people to live openly and authentically.

Around 100 students – dressed in rainbow-colored clothing, holding signs and various types of Pride flags – gathered at the south edge of the Provo campus, along 800 North between 400 and 500 East. Sebastian Stewart-Johnson, one of the organizers of activist group The Black Menaces, has been planning the event since June, said group member Kylee Shepherd, and worked with the Provo Police Department to get a permit to march on the streets.

Police cars cordoned off traffic in the area, and police reminded participants in the strikes not to step on the sidewalks, which are considered BYU campus property.

The protesters warmed up with a series of speaker-led chants from the crowd, such as “Hey hey ho ho, queerphobia must” and “two, four, six, eight stop exceptions, stop the hate”. Perhaps the loudest was “I’m weird and proud”.

As people came out of their classes they were given posters and markers to make their own signs. A man brought two large boxes of “rainbow” bouquets to give to attendees. Written in brightly colored ink, the messages on the signs included statements such as “God’s love is universal,” “We are queer, we are here and we will not change,” and “Acceptance saves lives.”

One participant dressed as Jesus held a sign that read, “What happened to love yourself?”

The protest began with four minutes of silence — one for each of the four years most students spend at a Title IX-exempt university, organizers said.

Many of the speakers read anonymous letters they said were from queer BYU students too afraid to step forward and put a face to their words. In one letter, one student said she was so “afraid” of being queer that she learned all the “ins and outs” of “LDS doctrine, policies, and cultural norms regarding queerness” to find out what she was could and could not say about themselves at BYU.

But despite what she went through at university, the letter writer continued, BYU is “pretty fond of her.” She said she “found God in the school, in the cracks between the teachings… I see the God in BYU, but it can be so much better.” I love BYU so it needs to be held accountable.”

(Palak Jayswal | The Salt Lake Tribune) Students and activists participate in a protest advocating for LGBTQ rights outside of Brigham Young University in Provo on Tuesday, October 11, 2022.

Another speaker, identified only as JJ, said the event was the latest part of a “queer revolution” that has been seeping through at BYU since 2016, calling it a sign of “progress in Provo.”

Some faculty members observed the protest; two of them declined to be interviewed by The Tribune. Someone posing as a school administrator just said, “I can’t speak to you,” when approached by a Tribune reporter.

Nathaniel Call, a BYU senior who sits on the side of the strike, said he finds the way BYU officials are navigating and targeting queer students “disappointing.” He said he hopes Tuesday’s event can get school officials to “notice” and “acknowledge” the existence of queer students.

Call also noted that events like this seem to draw slightly larger crowds each year.

Call said he watched the students walking by without stopping and wondered if those students didn’t know anyone who was gay. The students who don’t quit may see the protest as “a misguided endeavor,” Call said. [Those students] They should reach out and try to get to know someone and their experiences, and maybe they can love them.”

The strike ended with a call for protesters to take to Instagram to sign a petition to President Joe Biden urging him to ensure equality for LGBTQIA+ students. As of Tuesday afternoon, the petition had garnered nearly 1,300 signatures.

Shepherd of The Black Menaces said the event is an extension of the group’s mission: to start conversations on campus.

“It shows that maybe not BYU as an institution, but some of the people and faculty are trying to see differences and make an impact,” Shepherd said.

Spire and Rebuilding work together to renovate the St. John home

UberEats Customer Tips $4 on $17 order, no driver to pick it up