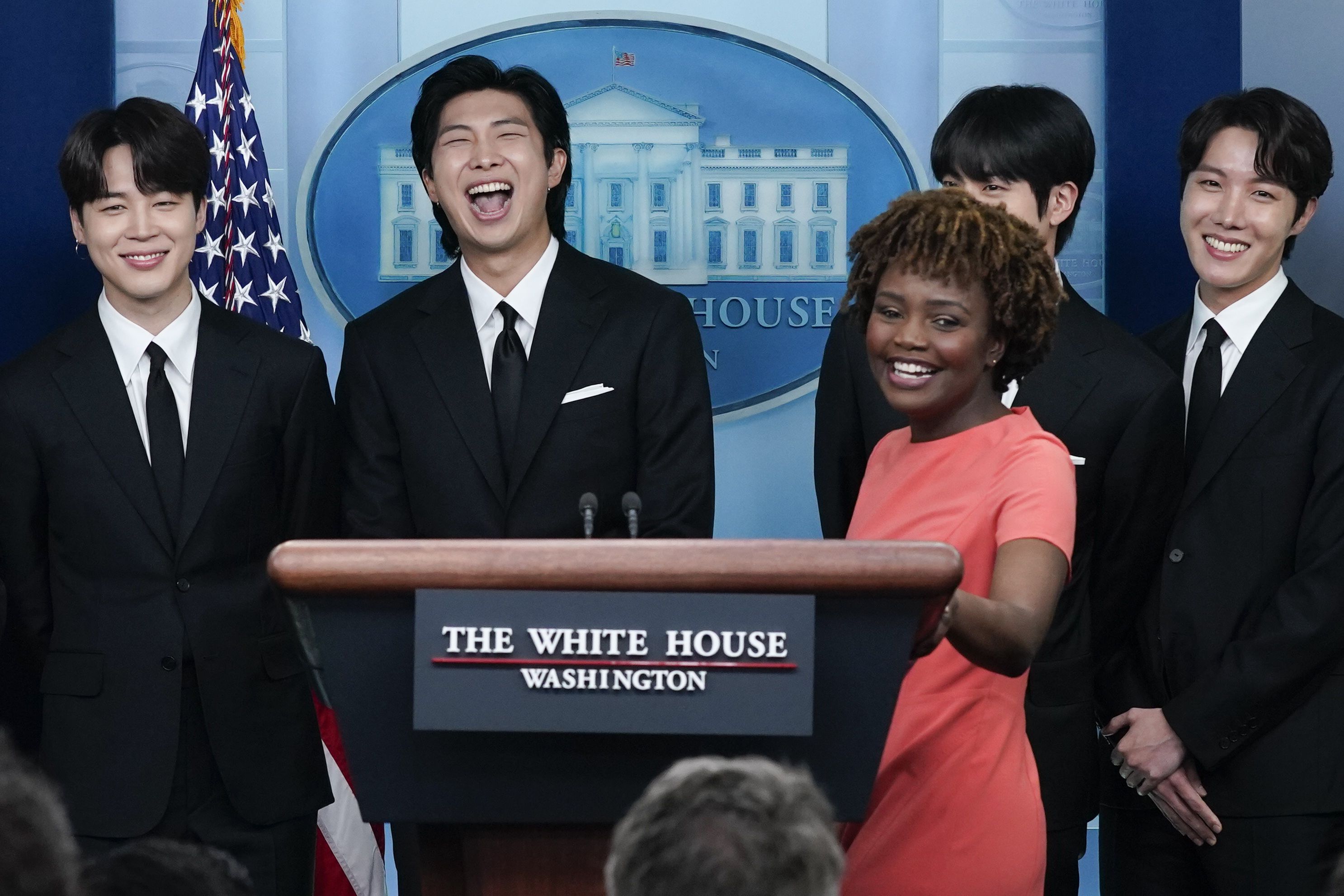 WASHINGTON – K-pop sensation BTS visited the White House on Tuesday to speak with President Joe Biden about tackling the rise in hate crimes against Asian Americans – and making an otherwise sad and scary subject hiss from superstars.

Band members J-Hope, RM, Suga, Jungkook, V, Jin and Jimin joined White House Press Secretary Karine Jean-Pierre in her briefing with reporters on the final day of Asian American and Pacific Islander Heritage Month. Jimin said the band was “devastated by the recent surge.” Crime and intolerance towards Asian Americans that has existed since the beginning of the coronavirus pandemic.

“There’s nothing wrong with being different,” Suga said through an interpreter. “Equality begins when we open up and embrace all our differences.” V said that “everyone has their own story.”

“We hope that today is a step forward in understanding and respecting each individual as a valuable person,” added V.

The band members wore black suits and ties and took turns making brief appearances on the podium. They were given a tour of the White House before the briefing and then held a closed meeting with the President in the Oval Office. Biden administration officials have held roundtables and other meetings with Asian-American leaders in recent weeks to discuss the violence.

Since its debut in 2013, BTS has received global recognition for its members’ self-produced music and activism, including an appearance at the United Nations. The band topped the Billboard Hot 100 chart three times in 2020 and have been nominated for prominent music awards such as the Grammys, Billboard Music Awards and MTV Video Music Awards.

The normally cramped White House briefing room was even busier than usual as journalists ready for BTS coverage filled the aisles adjacent to the rows of seats assigned to regularly participating outlets. The White House livestream – not known for a large afternoon audience – drew more than 230,000 viewers before the event even began.

After the band members spoke and translated their comments, reporters began asking them questions, but Jean-Pierre — who previously said the members wouldn’t be answering questions — chimed in and said, “We’ll go.” That prompted BTS members to say “Sorry” as they walked away from the podium.

The volume followed Brian Deese, director of the White House National Economic Council, who was there afterwards to speak to reporters Federal Reserve Chairman Jerome Powell meets with Biden earlier in the day.

“I can go home and tell my kids that BTS opened for me,” Deese joked, adding that he’s sure the room is “just as excited” about the impact of inflation on the US economy speak like they were for the band.

The scene was funny, but the problem that brought the group to the White House wasn’t. That Rise in anti-Asian hate crimes and discrimination since 2020 includes the March 2021 killings of eight people at Atlanta-area massage parlors, including six women of Asian descent.

After these shootings, Asian-American organizations across the US held unity events and took to social media to call for an end to the racist attacks. Within days, BTS tweeted, “We stand against racial discrimination,” adding the hashtags #StopAsianHate and #StopAAPIHate.

“We condemn violence. You, me and we all have the right to be respected,” BTS wrote at the time. “We will stand together.”

On Tuesday, the band thanked their fans, with Jungkook saying, “We are still amazed that the music of South Korean artists is reaching so many people around the world, breaking down language and cultural barriers in the process.”

“We believe that music is always an amazing and wonderful unifier of all things,” he added.

Jean-Pierre said BTS hopes to “combat racism, xenophobia and intolerance” faced by Asian communities. She noted that Biden signed legislation to address hate crimes related to COVID-19 and issued an executive order restoring the White House initiative to Asian Americans, Native Hawaiians and Pacific Islanders while helping to advance the research to prevent racism against such communities.