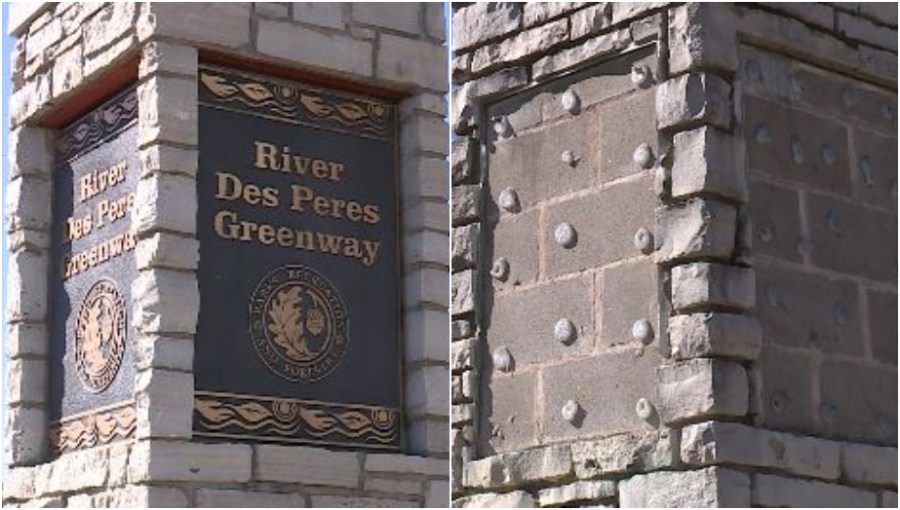 ST. LOUIS – There was a major robbery in South St. Louis with no witnesses or suspects to speak of. The River Des Peres Greenway is missing nine large, heavy bronze way markers.

Two markers are missing from each pillar at the Morgan Ford interchange, Carondelet/Germania, plus one more at the entrance to the pedestrian bridge over the river.

People have loved the $3.5 million greenway since it was built 17 years ago, with ornate neighborhood cornerstones, brick sidewalks with fleur-de-lis designs, and the iconic markers bearing the River Des Peres Greenway name.

A few markers remain, but there are now concerns that someone might steal them as well.

The others apparently disappeared over the weekend. There’s a city surveillance camera directly over one of the thefts, but police haven’t heard anything about the suspects.

“It’s always a shame to see something like this gone. Fortunately, they weren’t critical signposts,” said Emma Klues, vice president of communications and public relations at Great Rivers Greenway.

Mike DeSha, who lives on the River Des Peres Greenway, says the thefts are not a victimless crime.

Trending: Burglars on probation charged with more than a dozen new burglaries


“It’s our dollars. It’s our taxpayers’ dollars. And they’re supposed to build it all the way to St. Charles, you know, down the river,’ he said.

“We want people to have a good sense of place and be proud of where they are…we’re going to put something up again,” Klues said. “If anyone sees (the stolen markers) or finds them, we can certainly reuse them.”

Klues did not yet have a cost estimate or schedule for replacing the stolen markers.