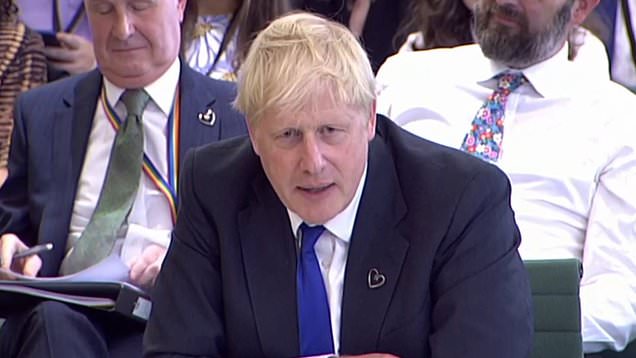 Boris Johnson has said it was not “responsible” to leave the number 10 given the challenges facing the country.

The prime minister was badly wounded by a wave of resignations from senior peers and junior ministers calling for his resignation.

A group of cabinet ministers – believed to include Grant Shapps and Brandon Lewis – are reportedly heading down to Downing Street to tell him to stop. Michael Gove is said to have already done so.

Mr Johnson appeared before the select liaison committee on Thursday, where he was confronted with one of his own earlier quotes about leaders holding on to power long after they have lost all authority.

Labor MP Darren Jones challenged the Prime Minister: “When a regime has been in power for too long, when it has mortally exhausted people’s patience and when oblivion finally beckons – I fear that is what you around the world are counting on allows leaders of this regime to act solely in the interests of self-preservation and not in the interests of the electorate.”

“Who wrote this quote?”

Mr Johnson joked: “They try me. Was it Cicero? Was it Aristotle? Maybe it was Plato? Montesquieu?’

Mr Jones intervened: “Just to let you know, you were Prime Minister. Maybe it was foresight.’


Who has left the government so far?

He continued: “I was joking, but honestly – and this must be difficult for you personally – it’s not funny. It’s not a game, people are fighting across the country.

“It’s not brave of you to continue like this.”

Mr Johnson said: “I think the country is going through tough times. You speak of duty.

He continued: “As I look at the biggest war in Europe in 80 years, I cannot for the life of me see how responsible it is to walk away from it.

“Especially not when you have a mandate like the one we won two or three years ago.”

https://metro.co.uk/2022/07/06/boris-johnson-says-it-wouldnt-be-responsible-for-him-to-resign-16955107/ Boris Johnson says it would not be 'responsible' if he resigned

Brilliant British brand MG are back with THREE new models