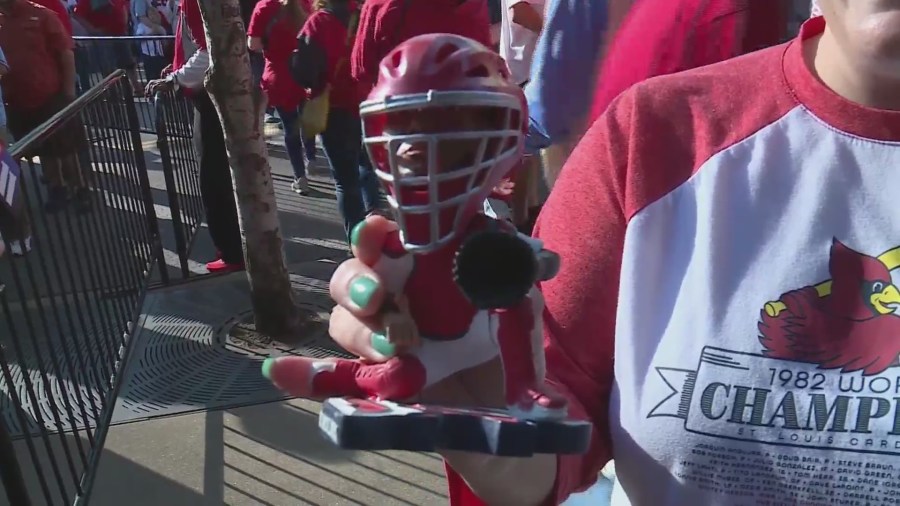 ST. LOUIS — Thousands of lucky St. Louis Cardinals fans walked out of the game with a bobble head from Yadier Molina, the third of three in a Cardinals Legends stadium giveaway set this season.

“I’ve been to all three, so I got the right grouping, it was fun,” said Jen Simon.


For the second straight day, long lines formed on the streets of St. Louis before the gates opened, and many fans waited several hours to ensure they ended up bobbing. As a set, the bobble heads sell for hundreds of dollars online, but many fans at Saturday’s game said they weren’t selling their giveaway.

“I’m sure it’s a valuable cause for a lot of people, but I mean this is farewell season. Why not take all of those memories and have something to cherish,” Simon said.

“No price. I get one my wife gets one so we usually have a pair. They will go to the children after we die,” said Tom Deyot.


Fans said Saturday’s bobblehead is a piece of history from a season they’ll never forget.

“Between Yadi and Waino’s feats and Pujols and everything else. This was the definition of magic for anyone who loves the Cardinals,” said Simon.

“We love it. It’s the last chance to see Yadi and Waino and the group together. Pujols, we want to see them together,” Gwen Allen said.

Molina and Pujols will play their last home game of the regular season on Sunday and will be honored in a pre-game ceremony. Wainwright has yet to announce his plans beyond this season.

https://fox2now.com/sports/st-louis-cardinals/bobblehead-craze-again-as-cardinals-give-out-molina-gifts-third-in-the-set/ Bobblehead madness again as Cardinals hand out Molina gifts, the third in the set

The 10 Quirkiest Small Towns in the U.S. — Best Life