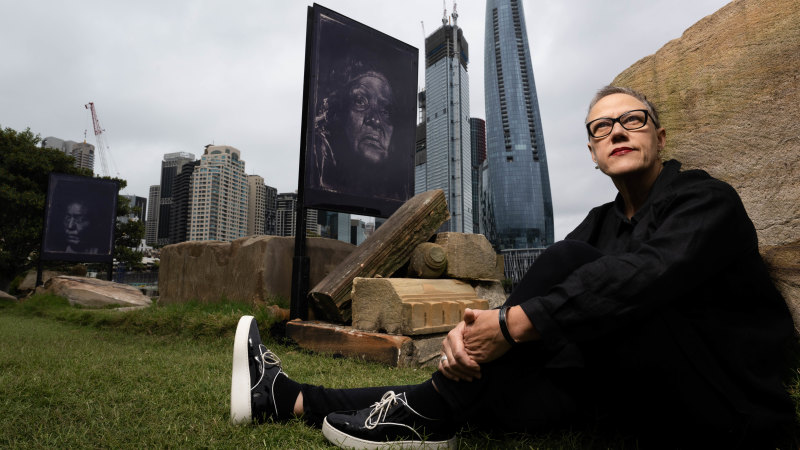 Croft’s subjects are photographed up close, some with their eyes closed in contemplation, gazing skyward or mid-distance.

Historical records describe Barangaroo as a difficult, feisty, and even intimidating figure in the tales of early contact after the arrival of the First Fleet in 1788. Bennelong was her second husband. She died shortly after birth in 1791 and is said to be buried in the grounds of the Royal Botanic Gardens.

“She breaks Bennelong’s spears and they have heated arguments, allegedly due to his close relationship with [Governor] Phillip, and she chastises resource overtaking and challenges the idea that the colonizers can take as many fish as they want.

“She always pushes back. I won’t look at this period from a feminist point of view, but she asserts herself, she knows her country. It stands at the interface of irreversible change. She can’t help it, but she does everything to make her presence felt, and for me it was about honoring that person.”

Other portraits in the series, begun by Croft in 2019, are set to music by Emma Donovan and will be projected at Old Government House in Parramatta for three days from January 19th.

Among the portraits on display is Croft himself. In July she departs for Harvard University, where she becomes the first First Nations woman – Gurindji/Malngin/Mudburra by her father’s people – to take up the prestigious Gough Whitlam and Malcolm Fraser Chair of Australian to undertake studies.

The temporary exhibit was commissioned by Lendlease and funded in part by the developer’s $20 million contribution to public art on the site – a condition of its development proposal. Infrastructure NSW is co-sponsor of the exhibition.