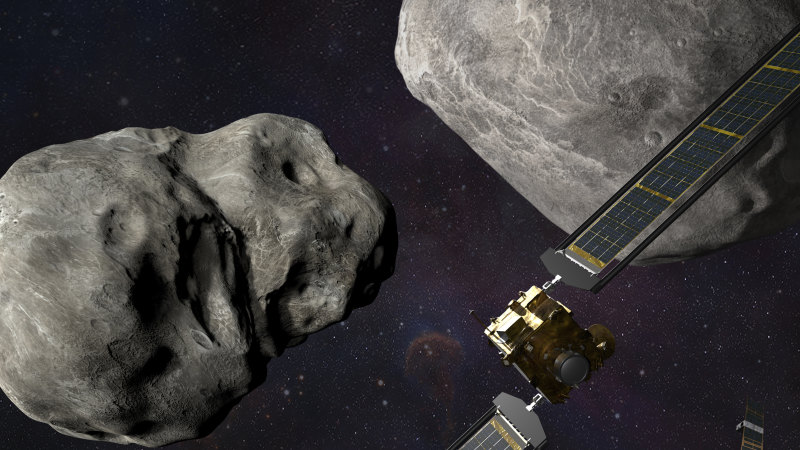 NASA’s asteroid-hunting spacecraft has successfully crashed head-on into an asteroid.

NASA’s Double Asteroid Redirection Test spacecraft, known as the DART, was scheduled to intentionally collide with the asteroid Dimorphos – which is about the size of the Great Pyramid of Giza – at 9.15am Australian time on Tuesday, achieving its mission on time.

On the live streamed video feed, Dimorphos slowly grew from a white pixel on a black background to a rock and finally a boulder covered in shadows and rocks. DART’s camera rolled all the way in as the spacecraft hit the rocks – before the feed eventually died.

DART is a test of NASA’s planetary defense plans. The hope is that an asteroid in danger of hitting Earth could be deflected by a spacecraft impact.

The asteroid is massive – 160 meters across, about the size of a soccer field – and dwarfs the tiny 570-kilogram spacecraft. In order to move it, you have to hit it really really hard – about 4 miles per second.

The blow still wasn’t hard enough to knock the asteroid the other way. The hope was to move it just slightly away from its orbit around its larger sister asteroid, Didymos. A second ship, LICIACube, flew alongside DART to monitor the collision and aftermath, and beamed all data back to Earth.

Australia played a key role in the mission, monitoring the vehicle’s data during its final moments.

https://www.smh.com.au/national/nasa-s-mission-successfully-strikes-an-asteroid-20220927-p5bl8e.html?ref=rss&utm_medium=rss&utm_source=rss_national Australia to control the final moments of the asteroid impact

Commemorative stamps featuring portraits of the Queen issued in her memory