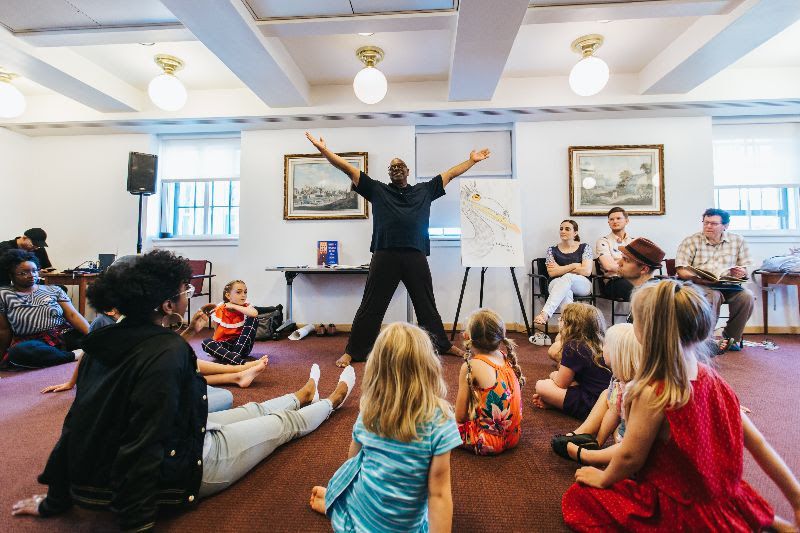 The Center for the Latter-day Saint Arts, an independent non-profit organization, is bringing LDS artists of color and their works to downtown Salt Lake City for a June 18 performance and exhibition at the Convention Center.

The event, which coincides with the closure of the Center’s New York gallery, represents the culmination of the organization’s ongoing efforts to support and highlight diverse Latter-day Saint performers, dancers, writers, musicians and visual artists from around the world.

Tickets are free and available through the Temple Square event website.

The showcase, titled “I AM: The Journey,” will feature performances by Alex Boyé and the Debra Bonner Unity Gospel Choir, as well as winners of the Center’s grant program for artists and scholars affiliated with the Church of Jesus Christ of Latter-Tag Saints and identifying as Black, indigenous or colored.

Kevin Giddins, co-producer and co-chair of the center’s Diversity and Inclusion Committee, designed the event in response to Church President Russell M. Nelson’s recent calls to stand against racism and “build bridges of understanding.”

“In today’s culture, different perspectives are viewed as division,” Giddins said in a press release, “but art allows us to see diversity as perspectives to activate inclusion.”

Connection of identity, faith and art

Kwani Povi Winder sits on the same committee with Giddins and was a judge on the grant program and curator of the freestanding art exhibition associated with the June event.

Winder, a local oil painter whose heritage is from the Santa Clara Pueblo tribe, described the grant selection process as a deeply meaningful experience.

“Everyone’s story was so unique,” she said, and yet “I was judging these applications and I kept thinking, ‘Oh my God, they have the same experience as me.'”

She said she particularly refers to the applicants’ descriptions of their own efforts to merge their identity and beliefs with their art.

Early in her career, Winder was sitting in a Temple Square seminar when she had what she called an “aha moment” as it dawned on her that she had erected a wall between her faith and her art. She immediately set about finding a way to unite the two.

The upcoming exhibition represents the same efforts by artists whose work, according to the grant call, is intended to reflect “the difficult-to-articulate complexity” of each artist.

Visitors can view the gallery during business hours on June 18 in the lobby in front of the conference center’s small theater. It will also be on display in the Deseret Book at the nearby City Creek Center from June 20 through July 31.

Overall, the experience has convinced Winder that Latter-day Saint religious art is on the cusp of a sea change, as more and more attention and resources flow toward diverse art and artists.

“There’s really amazing stuff coming,” she said, “now that there’s support and awareness and eyes are on these artists.”

In a speech at the center’s New York gallery in 2019, Mexican-American painter and illustrator Michelle Franzoni Thorley emphasized the need for additional funding for minority artists, particularly minority women, who are disproportionately affected by poverty.

“You may be wondering why there aren’t more LDS wives of color artists, particularly oil painters,” Thorley said. “Lack of educational opportunities and lack of money to buy supplies are important reasons. … Groceries, bills and medicines always come before art supplies.”

Closure of the Big Apple Center

Meanwhile, the center’s gallery in New York City will close on May 31, when its one-year, non-renewable lease expires.

Adjacent to the Church’s Manhattan Temple and across from Lincoln Center and Julliard, the one-room gallery has hosted multiple art exhibitions, lectures and speakers since it opened its doors to the public in June 2021.

Glen Nelson, co-founder of the center, described the space as a place for members and non-members of the faith to come together and connect with art and each other during the difficult and isolating days of the pandemic.

“I’ve seen it over and over again,” Nelson said. “People would come in and just bare their souls,” a development that surprised the New Yorker, who wasn’t used to this level of vulnerability from his fellow citizens.

“I would know all about the people that they lost during COVID and deaths and suicides and divorces and breakups and sometimes funny things that happened to them,” he said. “And they always insisted on knowing my name and giving me their name before they left.”

Overall, Nelson estimated that an average of 400 people attended each week, of which 70% to 90% were people from the community with no ties to the faith.

“That was one of the biggest surprises,” he said, “and the happiest for me.”

For now, Nelson said the center has no plans to recreate a similar space elsewhere, instead focusing on the type of events like the upcoming Temple Square presentation.

The organization has also teamed up to co-sponsor this year’s Mormon History Association annual conference, “Landscape, Art, and Religion: West Between the Mountains and the World,” being held June 2-5 in Logan.

https://www.sltrib.com/religion/2022/05/31/center-latter-day-saint/ As the Center for Latter-day Saint Arts closes its NYC gallery, it’s gearing up for a diverse exhibit at SLC