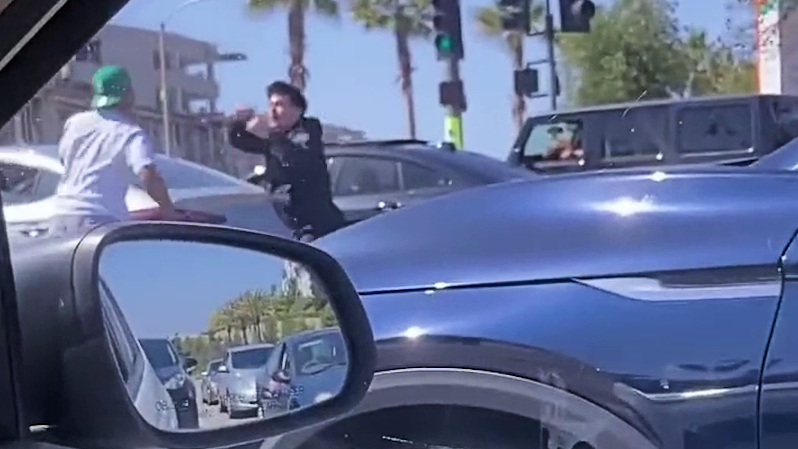 CHULA VISTA, Calif. — Two people are in custody Friday after they were shot at a South Bay intersection where one person was shot, the Chula Vista Police Department said.

At approximately 10:00 am on May 4, CVPD responded to reports of a shooting at the intersection of Olympic Parkway and Town Center Drive in Chula Vista.

Video obtained by FOX 5 shows that two men who got out of their vehicles began a physical fight, resulting in one of the men being shot dead in the altercation.


Gillio Repetto, 19, was arrested on Friday on suspicion of attempted murder and assault with a deadly weapon, CVPD captain Phil Collum said. 19-year-old Serenity Nieblas, who is believed to be the driver of the vehicle, was also arrested for allegedly helping to escape from the scene.

Police detectives were searching the Bonita area for the silver Hyundai shown in video when they located the two suspects on Friday in the Bonita area. Officers initiated a traffic stop and took both suspects into custody without incident, Collum said.

The gun used in the shooting has not yet been located and there are currently no outstanding suspects in the incident, according to the CVPD.


The man who was shot during the altercation was eventually taken to a nearby hospital with non-life-threatening injuries. It is unclear at this time if there is any relationship between the two parties involved.

Authorities did not immediately attribute the violence to “road rage” because it was not initially clear if the men had a previous relationship. But it was one of many violent confrontations on local roads and freeways, from an assault on a California Highway Patrol officer to a street rage shooting on Interstate 8 in Mission Valley.

British Airways is canceling 16,000 flights and staff are threatening wage strikes, raising fears of travel chaos in the summer