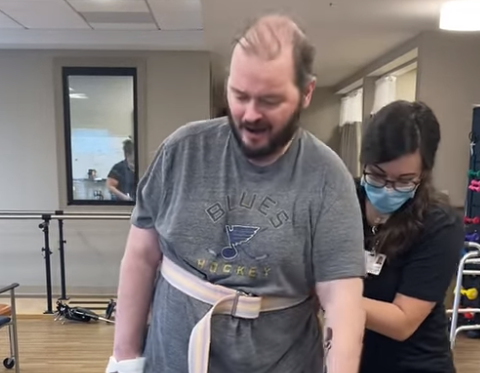 ST. LOUIS — An Arnold police officer was battling severe COVID-19 symptoms earlier this year after being shot on duty in 2017. Now he is making significant progress in his recovery.

Ryan O’Connor spent 46 days in hospital earlier this year while battling COVID-19 and double pneumonia. He was discharged from hospital in March and has recently shown some encouraging signs in his physical therapy program.

A video of earlier this week shows O’Connor’s crushing therapy, getting up from a wheelchair and walking steps with the help of a walker and an assistant. Wearing a St. Louis Blues jersey, O’Connor takes inspiration from Laura Brangian’s song “Gloria,” the anthem for the Blues’ 2019 Stanley Cup playoff heat. He also wishes mothers a Happy Mother’s Day while taking some steps.

An inspiration for O’Connor’s recovery was a sign with a quote by Christopher Reeve that read, “A hero is an ordinary human being who, in the face of overwhelming odds, finds the strength to persevere and persevere.” O’Connor’s wife Barbara tells FOX2, “That’s the quote I kept hanging in Ryan’s room.”


O’Connor was shot on duty and nearly killed in December 2017. He was shot in the back of the head by a burglary suspect. The suspect, 29-year-old Chad Klahs, shot himself in the head after shooting O’Connor and later died. O’Connor was taken to St. Anthony’s Medical Center with life-threatening injuries, but he survived his early treatment.

Earlier this year, O’Connor had been unable to breathe on his own due to his COVID-19 and double pneumonia diagnoses. His recovery from the illnesses was also complicated by a traumatic brain injury he suffered while on duty.

O’Connor continues his recovery at Craig Hospital. Branigan’s social media manager also shared a message of support on Friday via twitter in O’Connor’s recovery: “You got this Ryan!!!”

https://fox2now.com/news/arnold-officer-makes-strides-in-therapy-while-cheering-on-blues/ Arnold Officer advances in therapy while cheering on the blues