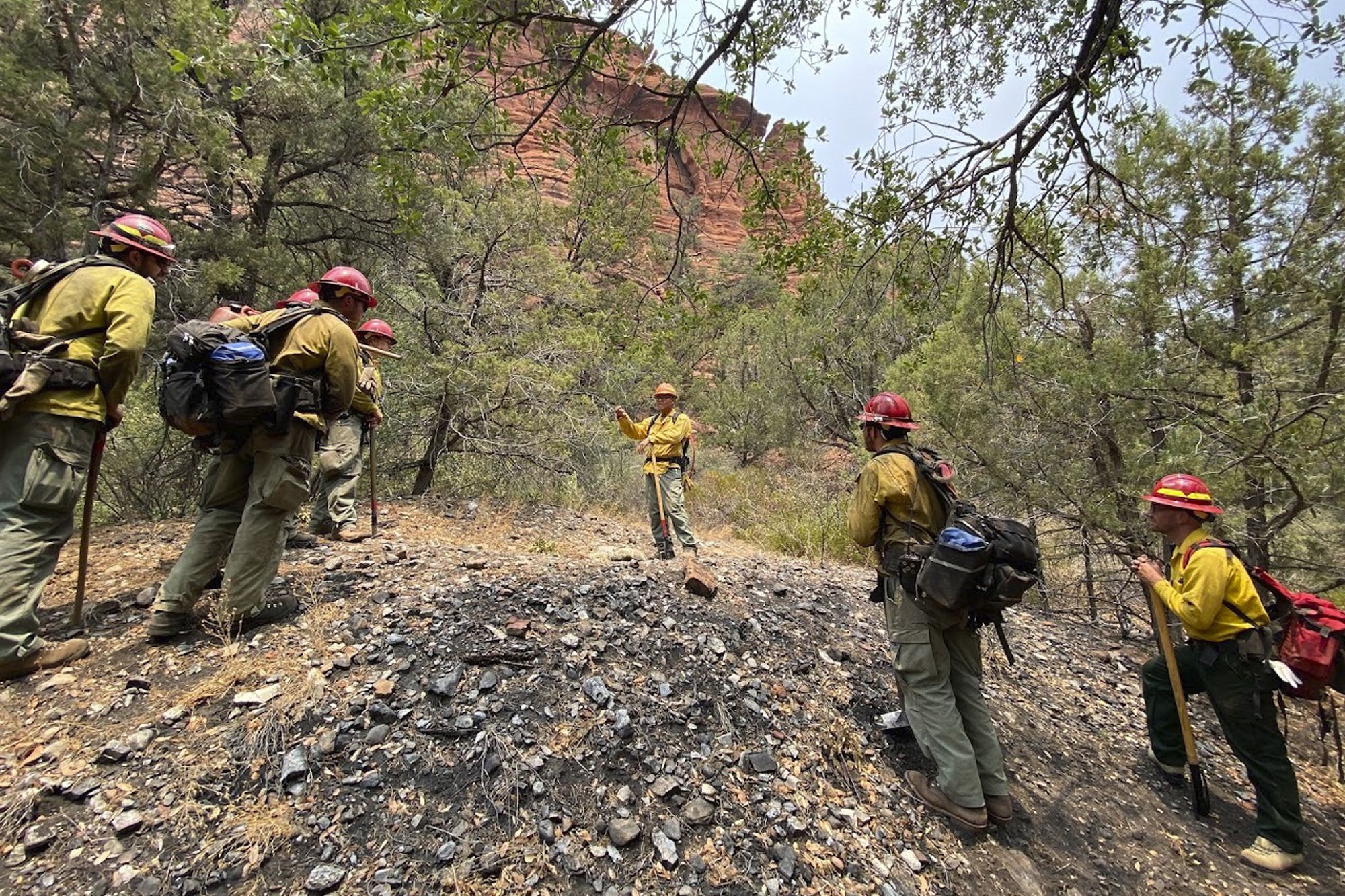 FLAGSTAFF, Ariz. – As Jason Nez searches rugged mountains, high deserts and cliffs for clues to ancient tools and dwellings only found in the American Southwest, he keeps in mind that they are part of a larger whole.

And fire is not new to them.

“They’ve been burned many, many times, and that’s healthy,” said Nez, a Navajo archaeologist and firefighter. “We see many of our cultural resources as living, and living beings are resilient.”

As two wildfires lap this mountainous northern Arizona town, the blazes traverse land teeming with reminders of human existence through the centuries — multi-story stone homes, rock carvings and pieces of clay, and pottery pots that have survived well in the arid climate since long before fire suppression became a tactic.

Today, firefighting crews are increasingly working to prevent or minimize damage from bulldozers and other modern tools to archaeological sites and artifacts, and to protect those on public display to ensure history is not lost for future generations.

“Some of these arrowheads, some of these pottery shards that you see out there have this power to change the way we see people were here,” Nez said.

Crew efforts include recruiting staff to advise them on wildlife and habitats, air quality and archaeology. In Arizona, a handful of archaeologists have walked miles in recent months to find evidence of significant past human activity in and around burned areas and map it for protection.

“We know that this area is really important to the tribes and that it’s the land of their ancestors,” said Jeanne Stevens, US Forest Service archaeologist and tribal relations specialist. “As we do more survey work, it helps add more pieces to the puzzle of what’s in the landscape.”

It’s not just the scattered ruins that need protection.

The nearby Wupatki National Monument – a trading center for indigenous communities around 1100 – has been evacuated twice this year because of wildfires. The exhibits there contain priceless items, including 800-year-old corn, beans and squash, along with intact Clovis tips or stone arrowheads that are around 13,000 years old.

Before the first wildfire broke out in April, forcing the evacuation of the memorial and hundreds of homes outside of Flagstaff, there was no set plan for how to quickly retrieve the artifacts, said Lauren Carter, the memorial’s lead ranger.

“The tunnel fire made it a — excuse the pun — burning issue to complete the plan,” she said.

Monument curator Gwenn Gallenstein assembled nested boxes with cavities for larger items and foam pockets for arrowheads and other smaller artifacts. She had photos of each item so anyone tasked with packaging knew exactly where to put them, she said.

Gallenstein was able to train one person how to pack ceramic pots, bone tools, sandals, textiles made from locally grown cotton and other items before another large wildfire broke out on June 12 and the memorial was closed again. No one expected to put the plan into action so quickly.

The fires have avoided the plant so far. Several boxes containing items dating back to what archaeologists call various indigenous cultures have been moved to the Museum of Northern Arizona for safekeeping.

Some Hopi clans consider those who lived in Wupatki as their ancestors. Navajo families later settled the area but slowly abandoned it, either willingly or under pressure from the National Park Service, which attempted to discourage private use of the land after it was declared a monument in 1924.

“It gives you an idea of ​​the density of cultural history here, extending beyond the boundaries of the National Monument and into the National Forest,” Carter said.

The Coconino National Forest on the southern edge of the plateau has mapped only 20% of its 2,900 square miles (7,510 square kilometers) and logged 11,000 archaeological sites, Stevens said. Forest restoration work involving mechanical thinning and prescribed burning has provided archaeologists with the ability to map locations and log objects. Due to the current wildfires, more discoveries are expected, particularly in the more remote areas, Stevens said.

The dry climate has helped preserve many of the artifacts and sites. But it’s also the type of climate prone to wildfires, particularly with a mix of fierce winds and heat that was all too common in the western United States this spring when climate change was heating up the region.

Stevens recalled working on a 2006 wildfire in the White Mountains of eastern Arizona and a prison crew encountering a large kiva — a circular stone built into the earth and used for ceremonies. “That was something that was really remarkable,” she said. “Where we’ve had fires lately, we’ve got a lot of surveying and a lot of knowledge, but we’re always ready for that new discovery.”

Nez has also made rare finds, including two Clovis points and hillside village squares that he didn’t expect to find.

“There will be pottery shards, there will be projectile tips,” he tells firefighters and managers. “In Aboriginal cultures, those things are out there, and we respect them by leaving them alone.”

https://www.local10.com/tech/2022/06/20/arizona-wildfires-sweep-land-rich-with-signs-of-ancient-life/ Arizona wildfires are devastating a land rich in evidence of ancient life