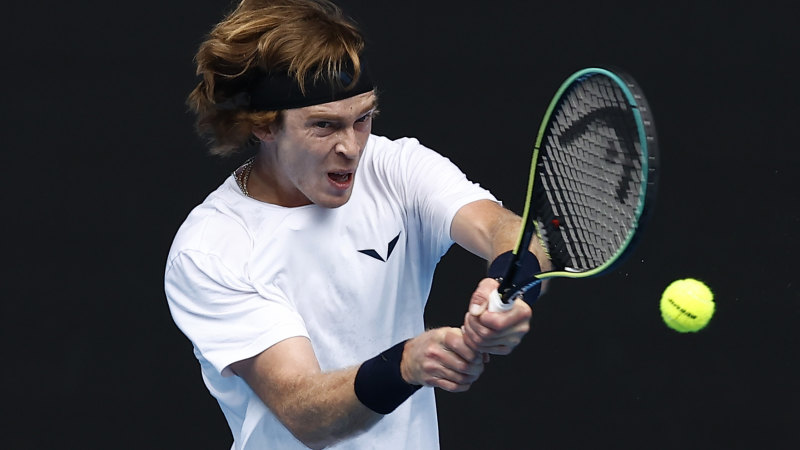 World No. 6 Rublev last year received widespread support for his spontaneous move to post an anti-war message on a TV camera.

But he lamented the flow-on effect of Russia’s invasion of Ukraine and how it “turns into a battle” between tennis bodies.

“[It’s like] In tennis, we start doing things wrong, such as B. Fights between the ATP and the ITF [and other bodies] because of those things,” Rublev said.

“Because there was no point in it… and I don’t think it was meant to be.

“There are other ways that can help the situation.”

A six-time Grand Slam quarterfinalist – including reaching the final eight in Melbourne two years ago – Rublev remains proud of his decision to write “No War Please” on a camera at a tournament in Dubai last February.

“It was right in the moment because they gave me a marker,” Rublev said.

“It was like shocking news so, I don’t know, it comes naturally.”

Teams from Russia and Belarus have been banned from the Davis Cup and Billie Jean King Cup team tournaments, as well as the new United Cup, a mixed-gender event hosted by Tennis Australia that opened the summer.

While Russian and Belarusian players are welcome at the Australian Open and other majors apart from Wimbledon, they are prevented from openly representing their nations. In addition, their profiles on the ATP and WTA websites do not indicate their nationality.

On the pitch, Rublev, the top 10 men’s game in the world, claims “time will tell” if promotion to the grand semi-finals or better will come in 2023.

Regardless, his nightmare draw against Major winner and former Australian Open finalist Dominic Thiem, a tournament wildcard, was front and center in the first round.

“Here I don’t know. Here we’re not even starting the tournament and I’ve got a really tough match from the start so I’m not even thinking that far.

“I’m having a very tough first lap and I’m just trying to focus on that.”

Rublev has also expanded his off-court interests over the past year by launching sportswear label Rublo.