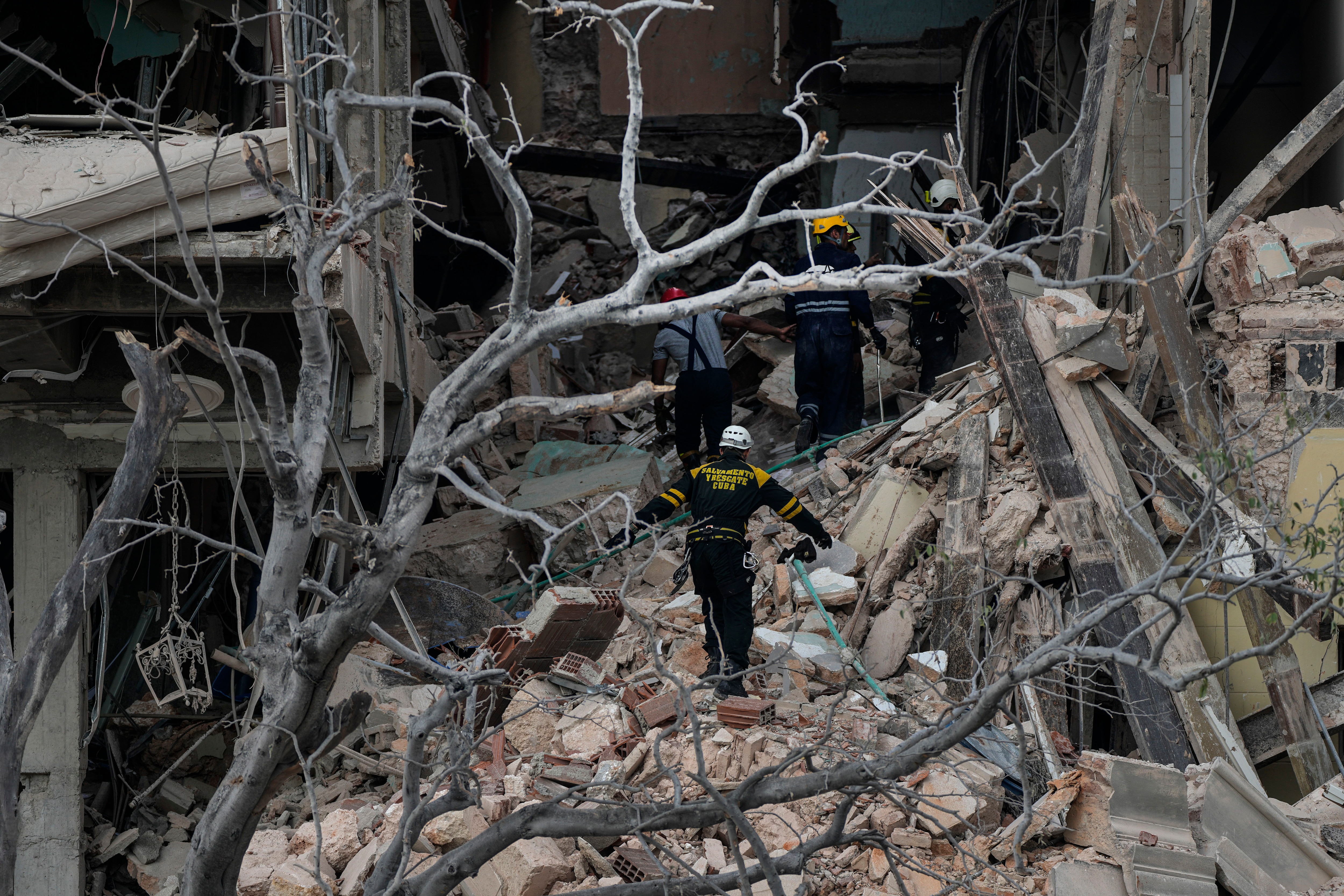 HAVANA – A massive explosion apparently caused by a natural gas leak killed at least 22 people, including a child, and injured dozens on Friday when it blew away the outer walls of a luxury hotel in the heart of the Cuban capital.

No tourists were staying at Havana’s 96-room Hotel Saratoga because it was being renovated, Havana Governor Reinaldo García Zapata told the Communist Party newspaper Granma.

“It’s not a bomb or an attack. It’s a tragic accident,” President Miguel Díaz-Canel, who visited the site, said in a tweet.

dr Julio Guerra Izquierdo, head of hospital services at the Health Ministry, told reporters that at least 74 people were injured. Among them were 14 children, according to a tweet from Díaz-Canel’s office.

Díaz-Canel said families in buildings near the hotel affected by the blast have been moved to safer locations.

Cuban state television reported the explosion was caused by a truck supplying natural gas to the hotel, but gave no details on how the gas ignited. A white tanker truck was removed from the site when rescue workers hosed it down with water.

The blast sent smoke into the air around the hotel, people in the street stared in awe, one said “Oh my God,” and cars honked as they sped away from the scene, video showed. It came as Cuba struggled to revitalize its key tourism sector, which has been devastated by the coronavirus pandemic.

Cuba’s national health minister, José Ángel Portal, told The Associated Press the number of casualties could rise as the search continues for people trapped in the rubble of the 19th-century building in the city’s Old Havana neighborhood could.

“We are still searching for a large group of people who may be under the rubble,” said Lt. Col. Noel Silva of the fire department.

A school with 300 students next to the hotel was evacuated. García Zapata said five of the students suffered minor injuries.

Police cordoned off the area while firefighters and rescue workers worked in the rubble of the emblematic hotel some 100 meters from the Cuban Capitol.

The hotel was first renovated in 2005 as part of the Cuban government’s revitalization of Old Havana and is owned by the Cuban military’s tourism company, Grupo de Turismo Gaviota SA. The company said it was investigating the cause of the blast and did not immediately respond to an email seeking more details about the hotel and the renovation.

The Hotel Saratoga was frequently used by VIPs and political figures, including high-ranking US government delegations. Beyoncé and Jay-Z stayed there during a visit to Cuba in 2013.

Photographer Michel Figueroa said he was walking past the hotel when “the explosion knocked me down and my head still hurts… It all happened very quickly.”

Concerned relatives of people who worked at the hotel turned up at a hospital in the afternoon to look for them. Among them was Beatriz Céspedes Cobas, who was in tears looking for her sister.

“She had to work today. She’s a housekeeper,” she said. “I work two blocks away. I felt the noise and initially didn’t associate the explosion with the hotel at all.

Yazira de la Caridad said the blast rocked her home a block from the hotel: “The whole building moved. I thought it was an earthquake.”

In addition to the pandemic’s impact on Cuba’s tourism sector, the country was already struggling with sanctions imposed by former US President Donald Trump and maintained by the Biden administration. The sanctions limited visits to the islands by US tourists and restricted remittances from Cubans in the US to their families in Cuba.

Tourism had started to revive a little earlier this year, but the war in Ukraine stifled a boom in Russian visitors, who made up almost a third of the tourists who came to Cuba last year.

The blast came as the Cuban government hosted the final day of a tourism conference in the famous beach town of Varadero aimed at attracting investors.

Mexican President Andrés Manuel López Obrador is due to arrive in Havana late Saturday for a visit, and Mexican Foreign Minister Marcelo Ebrard said the visit would go ahead anyway.

Mayiee Pérez said she rushed to the hotel after receiving a call from her husband Daniel Serra, who works in a foreign exchange shop at the hotel.

She said he told her, “I’m fine, I’m fine. They got us out.” But she couldn’t reach him after that.

https://www.local10.com/news/2022/05/06/strong-blast-at-havana-hotel-kills-8-people-injures-40/ An explosion at a luxury hotel in Havana killed 22 and injured dozens

At least 1 dead, 23 injured in tornado in northern Michigan