Nick Kyrgios says he would like to tell his side of the story after being summoned to appear in Canberra court over assault charges.

Instead, the Grand Slam contender let his racquet do the talking after being ordered to bite his tongue, frustrating at least one London tabloid reporter at Wimbledon.

Kyrgios may face a joint charge of assault in ACT Magistrates Court on August 2 after reports he grabbed his former girlfriend Chiara Passari in an incident before Christmas last year.

“Obviously I have a lot of thoughts, a lot of things I want to say, kind of my side on that,” Kyrgios said after overcoming his off-court concerns about reaching the Wimbledon semi-finals for the first time on Wednesday.

“Obviously I have been told by my lawyers that I cannot speak at this time.

“Listen, I understand that everyone wants to ask about this and all, but I can’t tell you too much about it right now.”

Former girlfriend Ajla Tomljanovic said earlier on Wednesday that she had never experienced domestic violence during her two-year relationship with Kyrgios.

Slightly surprised, Tomljanovic said she was unaware of Kyrgios’ previous relationship and the allegations when asked about her time with him between 2015 and 2017.

“It’s been a while since our relationship ended,” said the 29-year-old after her disappointing 4-6, 6-2, 6-3 Wimbledon quarter-final defeat by Kazakhstan’s Elena Rybakina.

“Obviously, I’ve always kept my relationship very private. I would like to keep it that way.

“I am definitely against domestic violence. I hope it gets resolved.

“But yeah, I mean, I didn’t have that experience with him.”

Kyrgios said his upcoming court date didn’t unduly affect him before beating unseeded Chilean Cristian Garin 6-4 6-3 7-6 (7-5) but he was obviously aware of it. 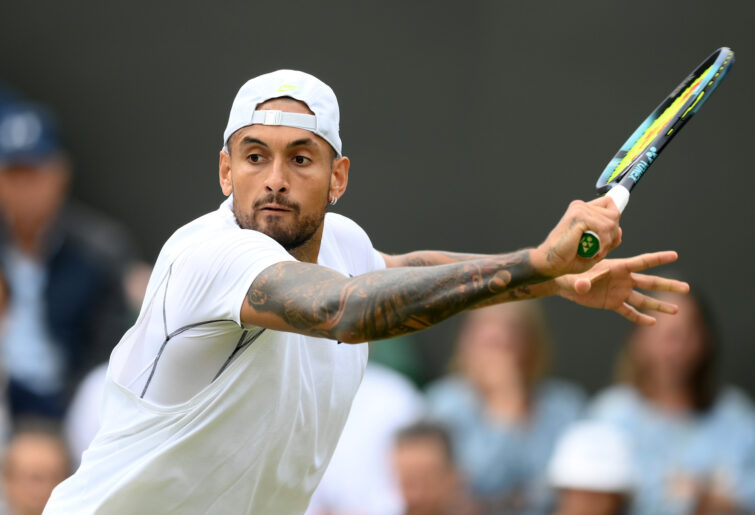 “Obviously I’ve read about it and obviously everyone else has been asking questions. It was hard.

“It was hard to just focus on the mission at hand. Today was the Wimbledon quarterfinals. I know deep down I was prepared for this.

“It didn’t affect my preparation at all. I knew that I stayed true to myself and that I was doing my best today.”

However, his appearance at the press conference did not satisfy a reporter, who continued to question Kyrgios about his upcoming court appearance in Australia.

Asked about the timing of the subpoena – during Wimbledon – and whether he would appear in court as ordered, Kyrgios said: “Look, I understand you want me to give you the answers. I can not. I can no longer speak on this subject.”

He also declined to answer whether or not he knew about the court date ahead of his quarter-finals – and perhaps even before the start of Wimbledon last week.

“Do you want me to sound like a broken record?” Kyrgios said.

“I’d like an answer if you can,” the reporter continued, before the Wimbledon presenter interrupted the conference when Kyrgios said “I can’t”.

“I think he said, sorry, he can’t answer that.”