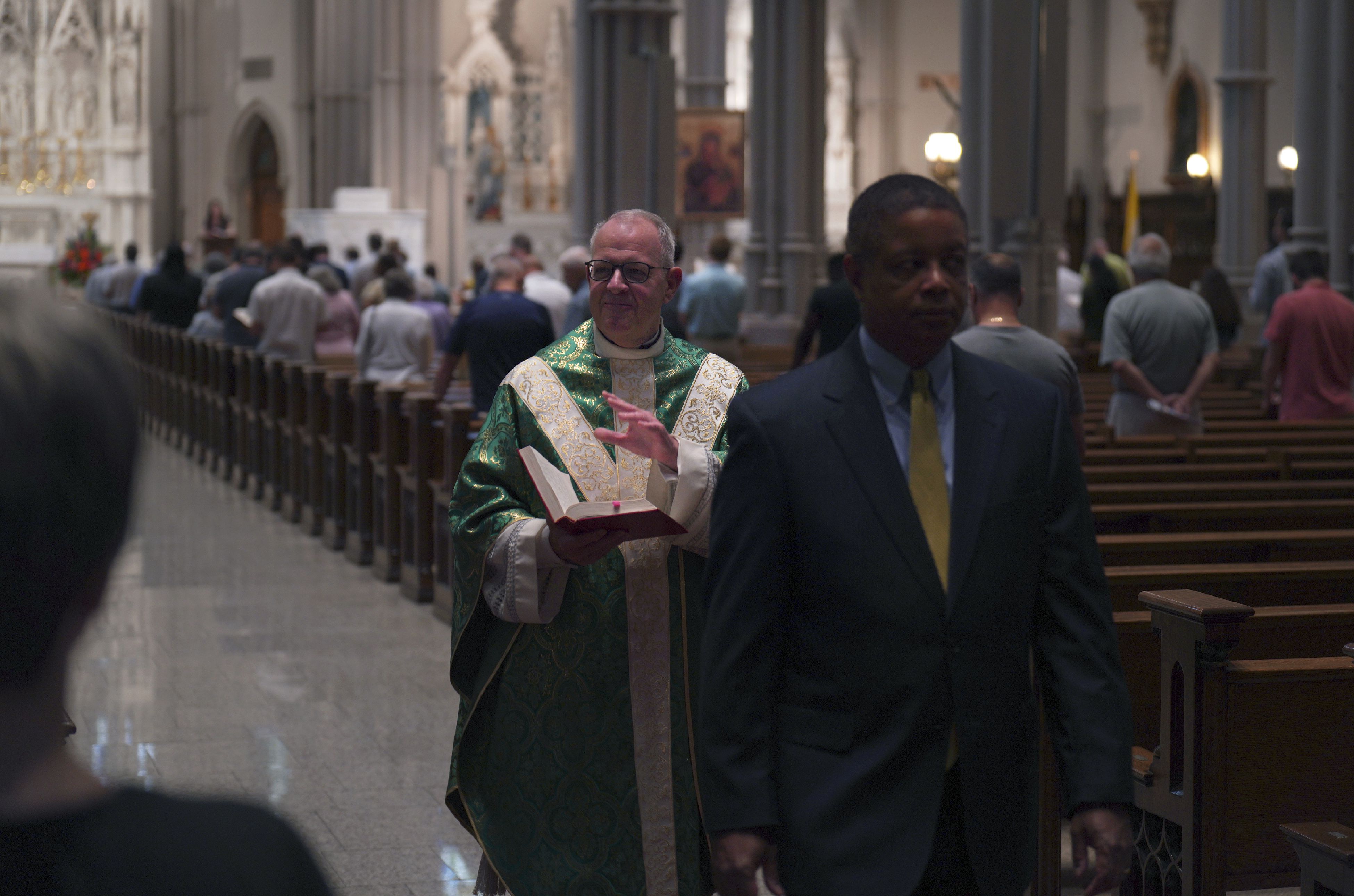 Praise and lament for the repeal of abortion rights filled sacred spaces this weekend as clergymen across the US rearranged worship schedules or rewrote sermons to provide their religious context — and competing messages — about the historic moment.

Abortion is a visceral issue for deeply divided religious Americans. Some are sad or angry after the US Supreme Court’s seismic decision in Dobbs v. Jackson on Friday. Others are grateful and excited.

At St. Paul Cathedral in Pittsburgh, the Rev. Kris Stubna scrapped his planned Sunday sermon and focused on what he called “a day of great joy and blessing.” He said the overturn of the nearly 50-year-old Roe v. Wade is the result of the prayers and efforts of many Catholics and others.

“This law violates the very law of God that every life is sacred,” he said. “A person cannot support abortion and still be a faithful member of the Church.”

Stubna’s comments would be seen by some as divisive as US Catholics disagree over abortion rights. Supporters include high-profile members of the faith like President Joe Biden and House Speaker Nancy Pelosi, who are facing communion restrictions as a result.

Not everyone listened to Stubna’s entire sermon. Though he was unable to ask her reasons, an Associated Press photographer saw a woman leave during the process. Security personnel estimated that three others also got out early.

Views about abortion polarize not only within denominations; the departments span the religious landscape.

Mourning the fall of Roe, she expressed deep emotion during a Sunday service and said: “It has taken safe legal abortions off the table and opened the door for states to come in and destroy reproductive justice. We stagger. Be crazy. So injured we can hardly move. We feel the loss, the pain about it.”

A majority of adults of Buddhist, Hindu, historically black Protestant, Jewish, Protestant, Muslim and orthodox Christian faiths support legal abortion in all or most cases, according to the Pew Research Center’s Religious Landscape Study.

Rabbi Sarah DePaolo took time at the start of Friday night’s Shabbat service at the Shir Ha-Ma’alot congregation in Irvine, California, to express her disappointment and urge congregational members to support one another and make room for the fearful.

Catholics are divided on this issue, while most evangelical Protestants, Jehovah’s Witnesses and members of The Church of Jesus Christ of Latter-day Saints say abortion should be illegal in all or most cases, according to the Pew Research Center study.

Rev. Samuel Rodriguez, president of the National Hispanic Christian Leadership Conference, views the verdict as a moral and spiritual victory. He told his California community at New Season on Sunday that now is the time for an unprecedented adoption movement.

Southern Baptists, who are members of the country’s largest Protestant denomination, are staunch supporters of anti-abortion views. Several pastors praised the verdict from their pulpits on Sunday.

The First Baptist Concord congregation in Knoxville, Tennessee erupted in applause as Pastor John Mark Harrison addressed them. He invited a panel of advocates to explain how everyone can continue to support those experiencing unwanted pregnancies through mentoring, fostering, adoption, treating systemic issues and more.

“There’s so much anger and emotion,” Harrison said. “What we need to understand is that we are not meant to stoke the emotions of either the right or the left. We are called to walk in and through the gospel of Jesus Christ…and to minister to real people in real times of crisis.”

At Central Church in College Station, Texas, Pastor Phillip Bethancourt reiterated that Roe’s fall was not the finish line: “It’s the starting gate of a new chapter. Abortion should not only be illegal, it should be unnecessary and unthinkable.”

David Rhoades, senior pastor at Broadview Baptist Church in Lubbock, Texas, said in an email the court decision is on par with the Emancipation Proclamation and June 16 and will reverberate for years.

He hoped church members would walk away from Sunday service with a clear understanding of what they need to do next, including “taking care of both the baby and his mother and continuing to work on electing pro-life representatives.” .

Other faith leaders redoubled their support for abortion rights.

Women should be able to make their own decisions, Rev. Fletcher Harper preached at the Episcopal Church of Our Savior in Secaucus, New Jersey.

“Baning abortion is a sinful act that perpetuates male supremacy and female subordination,” he said. “It extends the coercive power of the state to a place where it should have no business.”

During a Sunday service at the South Hills Unitarian Universalist Church in Mt. Lebanon, Pennsylvania, music director Mary Pratt read aloud a confessional statement affirming that she would remain “a champion of reproductive justice.”

Pratt said members were shocked and saddened, although they expected the outcome. “They were looking for reminders of why we need to get back out there and fight,” she said.

The beginning of services at the Pilgrim United Church of Christ in Durham, North Carolina included two verses from “We Shall Overcome” and a prayer from Rev. Melinda Keenan Wood for those outraged, heartbroken and anxious about Roe’s death.

“We know this decision will be measured in deaths, incarcerations and life-changing trauma as politicians rush to scrutinize the most painfully intimate decisions of all,” said Keenan Wood.

A prominent black pastor in Columbus, Ohio – Bishop Timothy Clarke of the First Church of God – tried to strike a balance in his Saturday message to the congregation, acknowledging conflicting views on abortion and urging the church to show compassion.

“I know and love people in both camps,” Clarke said. “They are sincere, committed. … They really see this as a life-changing issue.”

The pet alligator escapes from its home in south St. Louis