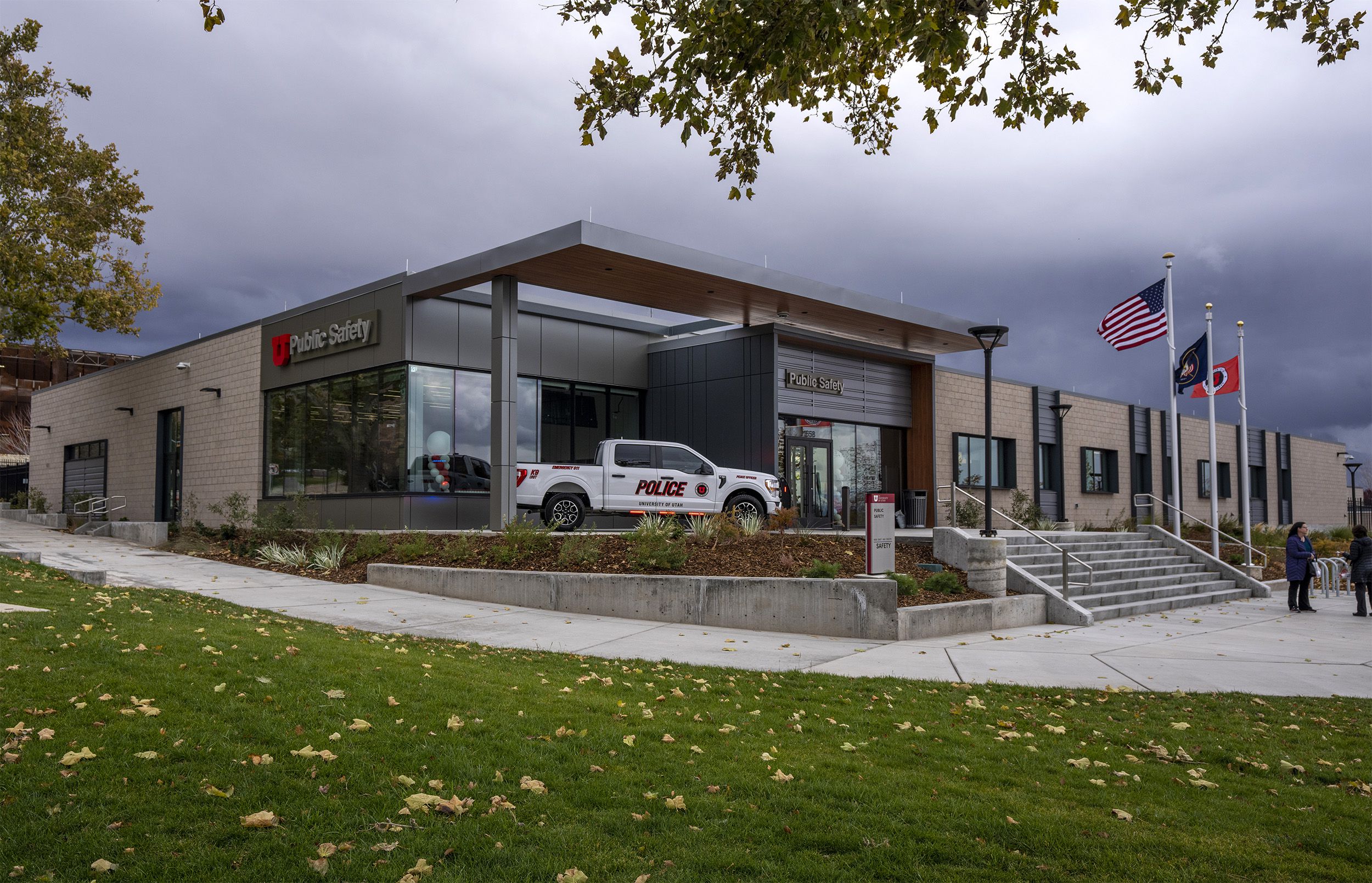 As he stood inside the new, state-of-the-art building for campus police — where balloons were piled high and officers clapped and cheered — University of Utah President Taylor Randall took a moment to acknowledge that the construction and the improvements were spurred by tragedy.

He pointed to the high-profile murder of Lauren McCluskey, a track athlete whose repeated attempts to get help from U. law enforcement went largely ignored. She was later killed in October 2018 by the man she had been trying to report. And her case became emblematic of the entrenched issues within the campus department around taking victims seriously.

“That was a pivotal moment in the history of this university,” Randall said solemnly into the microphone. “We had to admit there were some things we were doing wrong.”

Creating this new space, the president added, is the last of the 30 recommendations to be completed by the university from an independent review of how the school mishandled McCluskey’s case and what it needed to do going forward.

For instance, the $14.5 million building has what’s called “a soft interview room” for officers to talk to victims of sensitive crimes, including assault or extortion. McCluskey was interviewed by officers in the lobby of the old building.

There’s also a bigger dispatch room, where calls for both police and security are heard and responded to together; McCluskey’s first report to security about concerns about the man she’d been seeing was never linked to her later police report.

And there’s an evidence room where police are required to book items for cases, including physical objects and digital files. In McCluskey’s case, the officer assigned to her report showed off intimate photos she had sent in as proof she was being extorted.

The old building for campus police at the U. was 74 years old — and was originally constructed in 1948 to be temporary barracks during World War II.

Keith Squires, now the chief safety officer at the university, said Wednesday that he remembered going to that building, which sat west of the basketball arena, in the early 1990s. When he came back in 2018 as part of the team investigating how McCluskey’s case went wrong, he said, it looked just the same: outdated, dilapidated, lacking.

After handling the review, Squires joined the staff at the U. to oversee the reforms. He choked up as he described how policing on campus has changed, particularly in how victims are treated, and including the new soft interview room.

“That atmosphere of how that’s done makes such a difference,” he said.

[Read more: University of Utah police officers will no longer say these 3 things to victims]

The building sits on the south end of campus at 500 South and 1530 East. That’s just east of Rice-Eccles Stadium next to the tailgate parking lot.

That location was intentional, Randall said, to make the department visible and put it in the best position to quickly respond to the U. community, with roughly 50,000 students, faculty and staff across campus and at the university’s hospital.

Take a digital tour of the new building through these photos and descriptions of the space’s features:

The previous building had one interview room, used to talk to anybody who came in, said Ryan Doyle, the director of security and law enforcement technology, who walked visitors through the space Wednesday.

“Whether you were here as a victim or a suspect, you were treated the same,” he said.

That is not best practice. The new building has five interview rooms; the one specifically for victims has paintings on the wall and lamps and plush chairs. It’s meant to make someone reporting a crime feel as at ease as possible, Doyle said.

The room is specifically located at the front of the building, too, so victims don’t have to walk through the department. It’s also a physical representation of putting victims at the front.

Next to that room is the investigations team, made up of six detectives who work with victims. And there are two victim advocates next door, too.

There are signs throughout this area reminding staff how to be trauma-informed in their work.

Interview rooms for suspects and others

There are two interview rooms for suspects that are bare — and that’s on purpose, Doyle said.

They’re still working to get the final furniture in there. But it will have a stainless steel table bolted to the ground and a handcuff hook. This is called “a hard interview room.”

There are no two-way mirrors in these rooms, but there are surveillance cameras. All of the interviews, he said, are recorded and those in dispatch watch them live as a system check.

The last two interview rooms are for individuals who are neither a victim nor a suspect. They feature a desk and swivel chairs.

Next to those hard interview rooms are two holding cells. The campus department never had those before.

They can be used to detain a suspect for eight hours. They are also monitored with cameras. And there’s an area nearby with height measurements painted on the wall for booking photos if someone is sent to jail.

President Randall stood next to that, measuring about 5-foot-8.

“If you find yourself here, you’re having a bad day,” Doyle told the president.

There’s a restroom by the holding cells that flushes from the outside; that’s so a suspect can’t flush evidence.

That area of the building is accessed from a secure door outside so suspects come directly to that space, Doyle said. The port on the outside locks as soon as an officers drive in, so there’s no way a suspect could run away.

There were two computers in the old dispatch center, because two dispatchers work at a time to provide 24/7 coverage to the campus, said Simone Fanene, the associate director of emergency communications.

The six computers in the new center will allow more staff to work in case of a large event, like a football game or an emergency, she said.

Besides taking calls, Fanene said, dispatchers actively monitor the campus. They watch radiation detectors and fire alarms. They listen to radios and look at surveillance footage. They can see if doors are jammed open. And they call for an officer to respond when someone pushes a panic button.

There’s also a training center for dispatchers to learn new approaches when they’re not on duty. And they now have a room where they can decompress after a difficult 911 call. The center has hired an analyst, too, to compile data on the calls they get.

The campus has a direct police number — 801-585-2677. All 911 calls from the U. are first routed to the dispatch center at Salt Lake City police; they’re transferred to the university when it’s determined the caller is on campus.

The dispatch center is working to integrate its software to the same system that Salt Lake City police use so the departments can share information.

And the radios for security, police and several other departments, such as Facilities Management, are linked to allow communication across campus.

The dispatch center has a 24/7 language interpreter service for those who do not speak English as a first language. Fanene said a large number of those living in the campus dorms are international students, so it’s frequently used.

There’s an evidence intake area where all officers must go to book items recovered in a case.

They book stolen items, drugs, clothes, found property, money, weapons and more, Doyle said, into numbered lockers. Those lockers connect through a wall to a secure room where the evidence technician, John Hodson, works to catalog the items.

There are temperature-controlled areas, too, for items like blood samples.

The U.’s police department has two police dogs, but it’s never had a place for them.

The dogs — Zarah, 9, and Ava, 4 — are trained to sniff out explosives. And they’re often used at football games, the hospital and for any calls involving suspicious packages.

Now, there are kennels, showers and play areas for them.

Officer Matt Feltenberger, who trains with Ava, said she always “want to be out working.”

President Randall said Ava was his favorite part of the new facility. “She won my heart over,” he said with a laugh.

The kennels, while new, have already been retrofitted with new locks after Ava outsmarted them. She got out of her kennel and then also opened the door to the building and ran outside in the fenced parking lot.

The U. has long had a center where it has staff to respond to emergencies, like natural disasters or a chemical spill. That team was in the U.’s law school because the old police building didn’t have enough space. Now, they’re integrated into the new building.

The emergency management team also is responsible for posting evacuation maps in all buildings on campus and creating supply caches around the university in case there’s a need to create a shelter.

They’re currently working to make 3D maps of the buildings, too, to use for police responses in large events. And they send out campus alerts for emergencies. Those are sent to 100,000 email addresses and 75,000 phones via text.

There’s a workout room for the campus police officers and lockers that are twice the size they were in the old building. The area is unisex, Doyle said, as the department tries to recruit more female staff.

There’s also a lactation room for employees. And there’s a resting room with a bed where anyone who needs a break can nap.

The space has a training room and briefing room; officers all have desks and leaders have offices. Before, Doyle said, three sergeants were sharing one room. And there are cubicles for the security staff, too.

“We’ve been spread all over campus and siloed,” Doyle said. “Now, we can bring everyone together.”

The department has several new pieces of technology and is working to integrate more.

It has an electronic scanner, for instance, that takes fingerprints. And it has equipment to track cellphones to find missing persons. That’s usually able to find someone within a 9-meter radius.

The department is hoping to set up a system to be able to extract data off smartphones. It has previously used other departments’ system in the Salt Lake Valley to do that.

Detective Sioape Lautaha said a lot of cases are solved through either the cameras on campus or through the information on someone’s phone.

There was a case this year, he said, where someone was firing a gun in the Primary Children’s Hospital parking lot. With a warrant, they obtained the phone of the suspect and found videos he’d taken of himself while shooting out of his car that night.