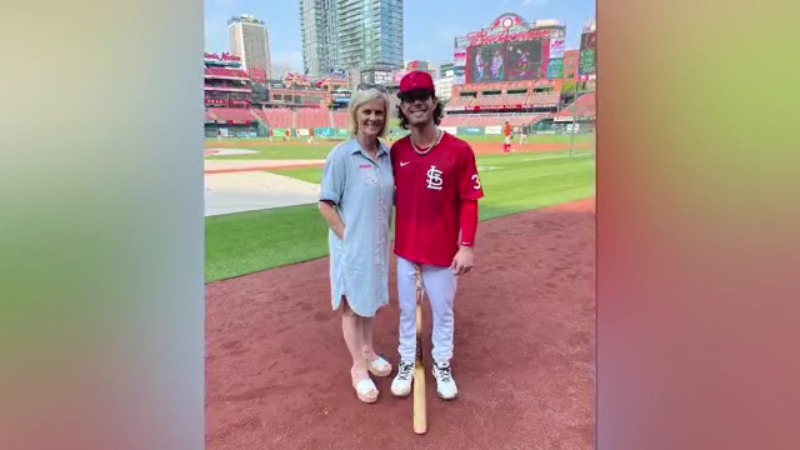 ST. LOUIS — The St. Louis Cardinals’ newest player, Kramer Robertson, made his MLB debut during Tuesday night’s home game as a pinch runner and then his batting debut Wednesday. He owes his major league success to the love and support of his parents.

“Putting on a jersey is always very special and it meant so much to me and so many other people that without them I wouldn’t be here,” Robertson said during Tuesday’s post-game interviews.

Robertson comes from a legendary family of athletes. His mother, Kim Mulkey, is a basketball coach for the LSU Tigers. This week she put her coaching on hold to be a proud mother cheering on her son on the touchline at Busch Stadium. Mulkey says she’s been there with her son since day 1 and spent hours hitting balls in her driveway.

“He’s got pop in his racquet beyond his size and an incredible arm. So I’m not surprised that he’s been so successful,” Mulkey said.

Mulkey says Robertson called to break her the news and she almost didn’t believe him.

“So I started asking questions to see if he was joking with me, and when he answered the questions I was like, ‘This boy is telling me the truth!’ So [I] came back to Baton Rouge and got [on] a charter,’ said Mulkey.

Victoria Pasley’s son sang the national anthem at the game and wants to be a teacher when he grows up. “I told my son every day, ‘I love you. You mean the world to me and you can be anything you want to be.'” Pasley said.


“I also wanted to make it clear to him that we’re not going to measure your career by whether or not you make it to the majors. But it’s a dream come true for him to come onto the field last night,” Mulkey said.

Mulkey says this is the perfect gift right after Mother’s Day and as her birthday is next week. She is currently on cloud nine to spend it with her son in St. Louis.

I'm newly self employed. Should I open a health savings account?