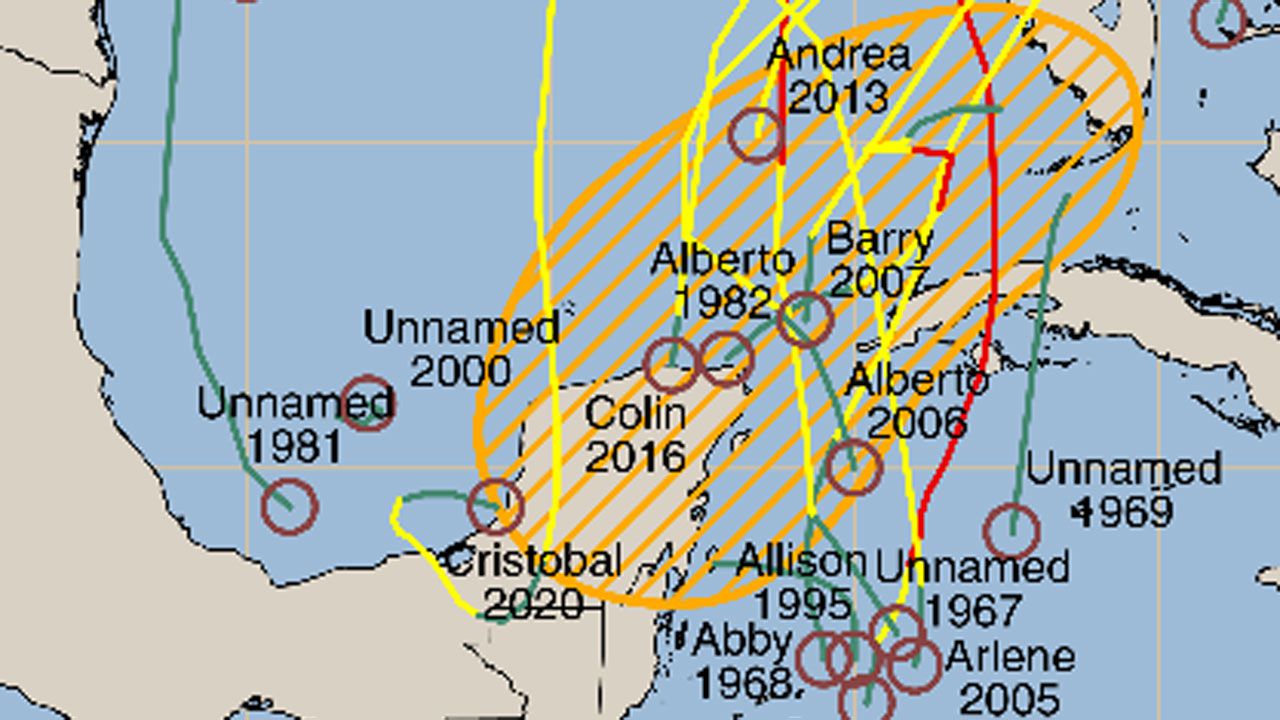 PEMBROKE PARK, Florida. – After what seemed an unusually calm May (after all, it’s been this late in the year without a named Atlantic storm since 2014), the tropics are beginning to trickle away.

On the eastern Pacific side, Hurricane Agatha made landfall in Mexico Monday as a Category 2 storm, the strongest corn storm to hit Mexico’s Pacific coast since records began in 1949. It has since weakened to a tropical depression over southwestern Mexico, but continues to produce torrential rain and flash floods.

Our computer models are consistent with sloughing off some of Agatha’s remains this week as she cruises inland across Mexico, and merging them with a larger stormy area over the Gulf of Mexico or western Caribbean by late Wednesday through Friday.

At 8:00 am Tuesday, the National Hurricane Center gives this area a 60% chance of becoming our first Atlantic tropical depression, or named storm, by the end of the week.

The area outlined by NHC overlies a portion of the Atlantic favored for storm formation in early June. Agatha is not expected to retain its tropical depression status over Mexico’s rugged terrain. So if a tropical storm forms from its remnants in the Gulf this week, it would be christened Alex — the first named storm of the 2022 Atlantic hurricane season.

Throughout May, the Atlantic was under largely dry, sinking air. This is part of a larger disturbance in the upper atmosphere called the Madden-Julian Oscillation.

May is not exactly a favorable time of year for tropics to form, especially under the influence of falling air drying out the lower part of the atmosphere. The yin to yang of this descending air branch of the Madden Julian Oscillation is the ascending air branch that has recently made its way to the eastern Pacific, Gulf of Mexico and Caribbean Sea. This change in upper air wind configuration has triggered the pattern change we are currently seeing.

As the Madden Julian Oscillation moves eastward into the Atlantic this week, it will help reduce some of the typically hostile wind shear in early June over the Gulf of Mexico, which will serve to help storm organization. The Gulf is also significantly warmer than average for late May; In fact, with the exception of 2015, the past week has been warmer than any similar period since 1981. As such, the Gulf “feels” more like mid-June than late May, which should provide some fuel for the brewing disorder.

However, a dip in the jet stream over the western Gulf this week should keep our system in check, and typical of early June, our models see it as a sloppy, one-sided system as it moves toward South Florida this weekend. It is worth noting that none of our current forecasts are pointing to a development into a strong storm. The result for South Florida will be an increase in tropical humidity with the possibility of heavy rains and flooding, especially after the recent weekend rains. Heavy rain timing for the WPLG prospect will be Friday through Saturday.

A concern for Southwest Florida may be the possibility of minor to moderate storm surges and coastal flooding, depending on the strength of the system. Models suggest the possibility of a hybrid (or subtropical) system that would also increase coastal flooding risk for Southwest Florida due to the greater extent of winds, even if the system remains weaker. This is something we plan to keep an eye on for our friends on the gulf side throughout the week.